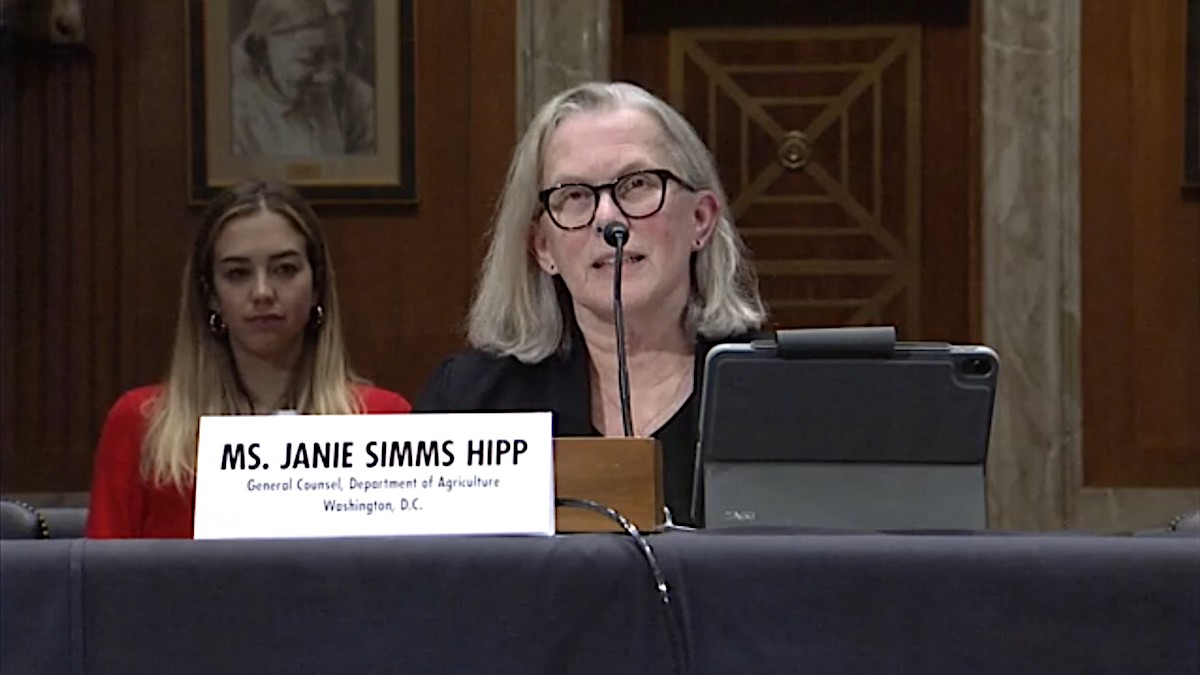 The hearing, titled “Buy Native American: Federal Support for Native Business Capacity Building and Success," saw senators on the committee asking questions first to federal officials and then panelists from a variety of Native-led organizations and tribal enterprises.

Murkowski discussed the USDA’s distribution of food to tribes in rural Alaska, specifically, the department’s habit of flying catfish from southern states up to the northern one. Thanks to an agreement with the Alaska Native Tribal Health Consortium (ANTHC), catfish in local USDA food distribution was replaced with locally sourced halibut.

“What doesn’t make sense is that ANTHC is only authorized to supplant items in the food packages,” said Sen. Murkowski, R-Alaska. “Is this accurate that they don’t have the flexibility to make these food packages more local, support local vendors?”

Hipp responded that the partnership, built through an expansion of self-determination contracting in the 2018 Farm Bill, featured “flexibility, but a very complicated flexibility” in allowing tribes to alter programmatic food distribution to better adhere to local diets and markets.

“We want to make it work, but it doesn’t make sense if what we’re trying to do is help local economies, build food security,” Murkowski said.

When Sen. Schatz, D-Hawaii, next took the floor, he addressed Hipp directly: “You’re going to fix this, aren’t you?”

“I’m going to do my best,” Hipp (Chickasaw Nation) said.

Native needs straining against the regulatory restraints of Native-focused programs and government-to-government partnerships quickly became a theme throughout the roughly two-hour hearing for both sets of panelists.

Garriott said that outright changing regulations was not yet on the table, but the Bureau of Indian Affairs was working to address barriers as best it could under current regulations.

“A tribe can go up to 10 years with our ag leasing, however, written into the law it requires us to do a reassessment or re-evaluation of the value of that land at the five-year mark,” Garriott said. “There are some internal barriers to those appraisals and land valuations. That’s something we’re committed to looking at and addressing in the short term, while we take a longer term — and by that, I mean under a year — at looking at our Indian ag leases.”

Garriott said some of that inflexibility regarding agricultural leases can be eased if tribes secure some authority regarding their own leases under the Helping Expedite and Advance Responsible Tribal Home Ownership Act of 2012, or HEARTH Act.

Under that legislation, tribes can submit their leasing regulations to the Department of the Interior ahead of time, allowing them to enter into surface leases under those approved regulations on their own.

“The more tribes are able to take control of their own regulatory powers, the more we’ll be able to streamline ag leases,” Garriott said.

Schatz concluded that, even alongside the HEARTH Act, more breathing room was required.

“Some of this may be through rulemaking, some of it you may have some internal flexibility, some of it I assume may be statutory, but let’s work it all out and come up with a plan going forward to get you the flexibility you need and for the department to also show flexibility,” he told Garriott.

The third federal panelist, Director of the Office of Indian Energy Policy and Programs Wahleah Johns under the Department of Energy, entertained questions regarding energy infrastructure in Indian Country and what a recent expansion of the DoE’s loan program could do for Native energy projects.

“Being able to give direct loans to tribal projects is a game-changer,” Johns said. “This is really going to be helpful for a lot of tribal projects out there that want to continue to grow.”

Sen. Steve Daines, R-Montana, asked Johns if the Office of Indian Energy Policy would allow tribes to choose which methods of energy generation they employ, even if those methods include fossil fuels or coal.

“We support tribes to pursue whatever their energy needs and vision is. That’s been the mission of our office — whatever they want to choose,” Johns said.

In the second half of the hearing, senators heard testimony from Native-led organizations and tribal enterprises about what could be done to improve business in Indian Country.

“The Food Distribution Program on Indian Reservations and other USDA food assistance programs represent both a critical part of the food security safety net for Indian Country and a dedicated institutional market opportunity for Native producers, who are vastly underrepresented in these opportunities currently,” Holden told the committee.

COVID-19 prompted the Agricultural Marketing Service to begin approaching Native producers for local food sourcing, Holden said. The move came after years of lobbying by the IAC and other members of the Native Farm Bill Coalition to begin including Native agriculture in USDA food programs.

“It should not have taken a global health crisis for USDA to take tribal leaders and producers seriously when they call for more Native-produced, culturally appropriate foods, especially in FDPIR, which serves primarily Tribal citizens,” Holden said. “Food sourcing through these 638 contracts is a powerful opportunity for tribal nations to do what we have always done: Feed our own people.”

Holden’s testimony also touched on bringing the USDA into the Buy Indian Act, a sentiment Hipp echoed earlier in the hearing.

“There are so many other opportunities we’ve seen within USDA where we could more tightly work with Native producers and tribal governments to really accomplish their goals of bringing more of their products to market, and one of those markets could be the USDA,” Hipp said. “USDA doesn’t have Native preference in procurement, so unless you identify that within your own efforts, we only have so far we can go to meet the moment. Really unpacking those opportunities is very important.”

Willie outlined one step the Navajo DED planned to take through its application to the U.S. Treasury’s State Small Business Credit Initiative, funds from which will help address tribal members’ chronic lack of credit and collateral. Less restrictive policies would allow the tribe to take more steps in the same vein, Willie said.

“The economy of the Navajo Nation depends on the willingness of the U.S. federal government to allow greater flexibility or see that innovative ideas turn into substantial and impactful policies that foster greater autonomy for our economic decisions,” Willie said. “It is widely understood that small businesses are the foundation of the economy. We ask for greater flexibility to support our Navajo small businesses and ultimately contribute to the greater American economy.”