FT. YATES, N.D. — The tribe that gained attention for leading the fight to block the Dakota Access Pipeline is taking the reins of its clean energy future with the creation of a public power authority to develop a 235-megawatt wind farm.

The Standing Rock Sioux Tribe’s SAGE Development Authority, a federally chartered Section 17 corporation, will need to raise $325 million for the build-out of the Anpetu Wi wind farm, which it plans to construct on reservation lands in North Dakota.

To date, SAGE (Strategic, Advancement, Goals, and the Environment) has raised nearly $2 million from nine different philanthropic foundations for pre-development work, as well as secured a $100,000 award from NDN Collective, a Rapid City, S.D.-based advocacy and funding group, for the project’s commitment to stem the effects of climate change.

“We have two years to interview equity investors and power purchasers,” SAGE General Manager Joseph McNeil told Tribal Business News. “The more funds we raise, the more the tribe will own, which is what we want.”

Previously, the tribe has rejected wind energy development proposals on its reservation lands because the tribe lacked a significant ownership stake in the projects. In Anpetu Wi, Standing Rock sees an opportunity to develop its own utility to better control electricity costs on the reservation, as well as generate revenue to reinvest in the more than 15,500-member sovereign nation.

“If we had other opportunities to invest and develop utilities for our communities to benefit from, we would have invested in them already,” McNeil said of the tribe’s push to develop the project on its own.

According to SAGE, Anpetu Wi — which means “breaking of a new day” in Lakota — has the potential to become the single-largest revenue source for the Standing Rock Sioux Tribe. Estimates project the wind farm, which is expected to generate $20 million to $25 million in revenue in its first year and grow from there, would more than double the tribe’s current annual revenue of approximately $9 million.

Importantly, executives say the revenue generated from SAGE would flow back to the tribe to fund economic development, reinvesting the money into future projects and the Standing Rock community as a whole.

Meeting the need for affordable electricity is critical for Standing Rock’s population. Currently, the reservation receives all of its energy from power companies as far away as Bismarck, N.D., roughly 80 miles from the reservation. The commercial providers sell power at rates higher than many tribal members can afford. To that end, the reservation population experiences 70 percent unemployment and has a 40 percent poverty rate, making it one of the poorest regions in the U.S., according to SAGE’s research. 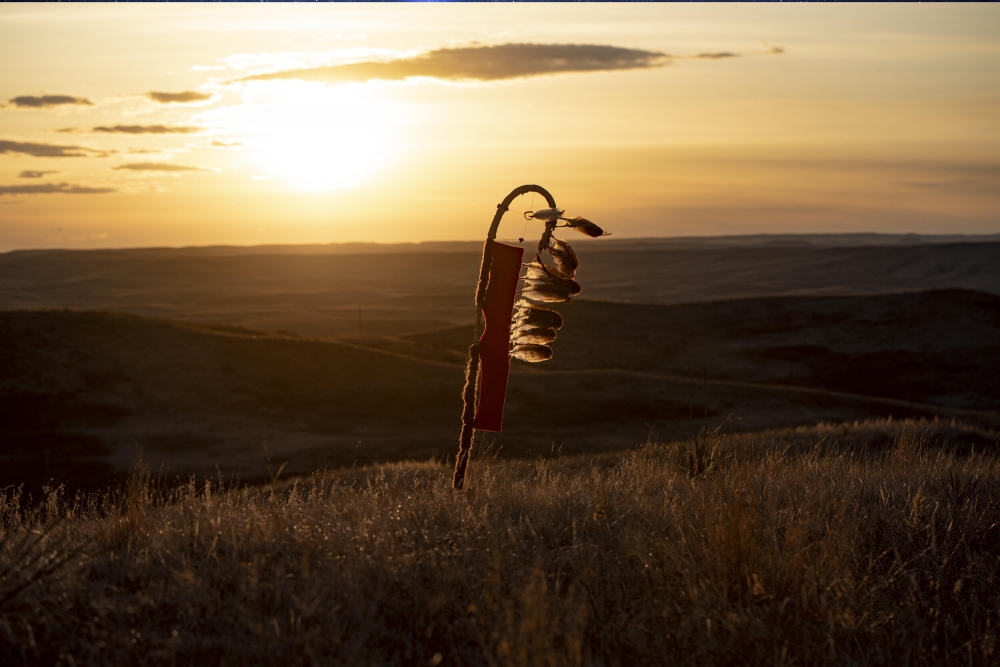 SAGE studied several locations for Aneptu Wi on the Standing Rock Sioux Reservation, including a site over the border in South Dakota, but ultimately selected a location in the Porcupine Hills — spanning nearly 20 miles from Ft. Yates to Cannonball, N.D. — because of its proximity to existing electric transmission lines. Picking the North Dakota location cut the distance to connect to transmission lines to 12 miles, which compares to 40 miles at the South Dakota site SAGE also studied.

The company has already submitted an application for interconnection to Little Rock, Ark.-based Southwest Power Pool Inc., which manages the electric grid and wholesale power market for the central United States.

By planning to start construction yet this year, SAGE will be able to leverage the federal renewable electricity production tax credit that is set to expire at the end of 2020. The program offers a 10-year per-kilowatt-hour tax credit for qualifying projects.

In October, SAGE launched a crowdfunding campaign to raise $1.5 million as part of a phase one capital raise for the project. The company’s pre-development work includes building a road to the planned site of Aneptu Wi.

To date, six developers, including some Native-owned companies, have expressed interest in partnering with the Standing Rock Sioux Tribe on Anpetu Wi, according to McNeil.

“We want to pick an investor that aligns with us and our values,” McNeil said. “We’re a community-based energy development authority with everything going back into the community.”

In seeking out equity partners for the wind farm, SAGE’s pitch comes down to the efficiency and design of Aneptu Wi, which expects to operate at 50 percent capacity, compared to most wind farms in the area which only operate at 30 percent to 40 percent. Additionally, the company plans to explore its options to offload excess energy capacity for commercial sale off of the reservation.

“A 50 percent capacity factor is better than most other new wind farms and considerably better than the industry average which includes many older farms and turbine designs,” said Brian Ross, sustainable development program manager at the Minneapolis, Minn.-based Great Plains Institute.

Capacity factor is measured over the course of a year and takes into account the total amount of production for a given investment. A higher capacity factor appeals to investors because it means a quicker return on investment and also a more reliable power source, Ross added.

“When the power is needed is just as important as how much power is available,” Ross told Tribal Business News. “Investors and consumers both want to know if power is going to be there, even on the hottest day of the year.”

According to the U.S. Energy Information Association, the highest performing wind capacity rates in 2019 were just below 35 percent.

However, capacity factor marks just one consideration regarding the usefulness or reliability of the project for investors and power consumers. Other factors are complex and can include nearby power producers, energy transmission, environment considerations and cultural concerns.

According to the National Renewable Energy Laboratory, the Standing Rock Indian Reservation is one of 15 tribal lands with the highest potential for wind electricity generation. That wind potential combined with the capacity factor for Aneptu Wi places the Standing Rock Sioux Tribe in a unique position to proceed in one of the first renewable energy projects of its kind with the tribe retaining a significant percentage of ownership, executives said.

“We’re building a future so that our people can afford electricity,” McNeil said. “We would gain utility for the reservation, which hasn’t been done before.”

If successful with SAGE and Aneptu Wi, the Standing Rock Sioux Tribe wants to demonstrate to other tribes how to take control and exercise sovereignty over their energy futures. For example, SAGE’s board is entirely made up of enrolled members of the tribe, and includes two women — Fawn Wasin Zi and Phyllis Young — as its chair and vice chair, respectively.

“We want this project to be something that’s not just beneficial for Standing Rock, but for other tribes as well as we share our findings with others,” McNeil said.

--
Darren Thompson (Lac du Flambeau Ojibwe) is a freelance journalist and based in the Twin Cities of Minnesota, where he also contributes to Unicorn Riot, an alternative media publication. Thompson has reported on political unrest, tribal sovereignty, and Indigenous issues for the Aboriginal Peoples Television Network, Indian Country Today, Native News Online, Powwows.com and Unicorn Riot. He has contributed to the New York Times, the Washington Post, and Voice of America on various Indigenous issues in international conversation.