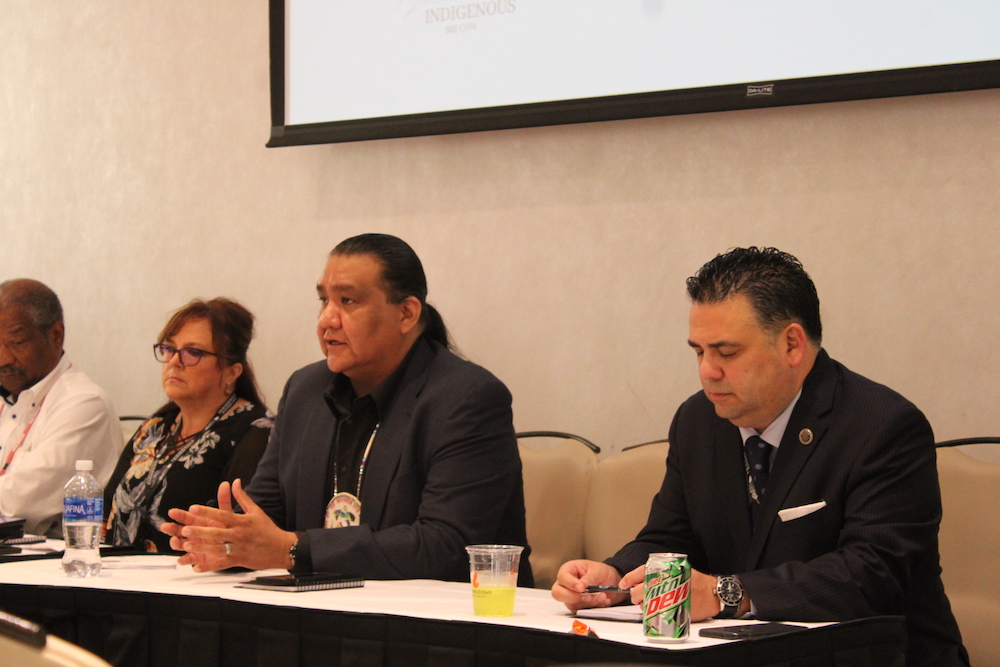 MILWAUKEE—With the passage of a “once-in-a-generation” infrastructure law last fall, funding opportunities for tribal energy projects have increased to unprecedented levels. That’s according to industry experts who spoke at an Indigenous business conference in Milwaukee this week.

“No matter what region of the country you’re in, there is something going on from A to Z,” former Assistant Secretary of the U.S. Dept. of Energy (DOE) James Campos said during the panel discussion. “From nuclear modules to gas and oil, electricity, renewable energy, organic based energy, oceanic energy, money is available in all of these areas.”

Campos is currently a principal partner with Right Energy Group, a consulting agency that helps tribes and businesses take advantage of energy opportunities that are available. Campos and another business partner, Kenny Frost, were among those who spoke to conference attendees about the opportunities — as well as the challenges — that come with using federal funds for energy projects.

For starters, navigating the DOE can be daunting and takes a tremendous investment of time, said Frost, a citizen of the Southern Ute Tribe and the DOE’s former Indian Energy Director.

“Right now, Indian Country, we’re seeing a ‘gold rush’ for energy,” he said. “The idea is to make sure Tribes know what endeavor they’re getting into to ensure they get the full value of their assets.”

One resource mentioned during the panel is the Tribal Playbook, which The White House released to help Tribal governments take advantage of the historic investments in infrastructure.

Frost also spoke about how his Tribe in southwestern Colorado transitioned from being energy assimilationists to energy leaders. “We went from being a poor, destitute Tribe in the 1990s, to being the largest employer in the four corners region,” he said. “Now, we have more jobs than citizens.”

The Ute Mountain Ute Tribe was awarded $9 million in the early 1990s from a water-rights settlement and started investing in energy infrastructure that allowed the Tribe to transition from “being royalty receivers to generating direct revenue,” Frost said.

Because it had developed revenue streams from assets outside of Indian gaming, the Tribe wasn't affected as much as others during the Covid-19 pandemic, Frost said. Today, the Tribe has bargaining power to “pick and choose” who they work with, or how they invest in other projects that are beneficial for the Tribe and its citizens.

The Bureau of Indian Affairs estimates that Tribal lands compose 5% of land area in the United States, but contains an estimated 10% of all energy resources in the country. According to the Dept. of Energy, the Office of Indian Energy has invested over $114 million to more than 200 Tribal energy projects across 48 contiguous states and Alaska between 2010 and 2021.

Many energy projects, though, have stalled or failed for a variety of reasons, including turnover in tribal government and changes in the White House.

“A lot of energy projects die because of transitions of Tribal leadership,” Frost said. “The goal is to find energy champions that are not elected officials.”

Frost also advised Tribes to build relationships with “career Feds,” or federal employees that are not appointed by the President. “The most important question any Tribe should be asking is, ‘who are the career feds in these areas?’” Frost said. “During [administration] transition changes, these people are still there.”

Once you establish relationships with the career feds, “projects move a lot quicker,” Frost said, adding that two departments within the Dept. of Interior that are helpful for Tribes: the Division of Energy Mineral Development (DEMD) and Indian Energy Service Center.