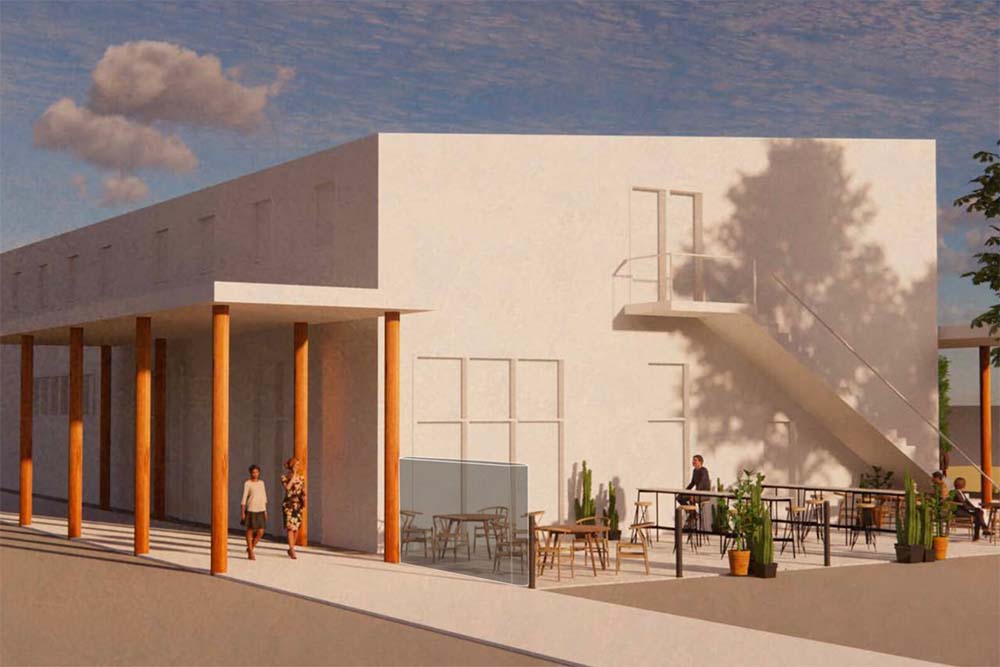 The 2,000-square-foot building is currently slated for completion toward the end of the year or in early 2022. So far, Change Labs has roughly $500,000 budgeted for the project.

Having a new building of its own provides Change Labs with a more permanent space as well as basic amenities, co-founder Heather Fleming told Tribal Business News.

“The biggest thing is, we’ll have a bathroom,” Fleming said. “In our current facility, we have no bathroom. It’s such a small thing, but it’s huge for our staff, who are there every day. We’re just even excited to have a bathroom and a small kitchen area so that people can use the facilities and make food without having to travel.”

“We just see this as being real estate for the community as much as it is for Change Labs,” Fleming said. “The land is a huge first step.”

Moreover, Fleming said Change Labs’ struggles to locate land for a new headquarters serve as a microcosm of the challenges many Native American businesses face in trying to lease reservation lands. Because most reservation lands are held in trust by the federal government, the use of those lands is tightly controlled, which poses challenges for fledgling businesses, adds cost, and can significantly draw out the time it takes to open, thereby putting them at a competitive disadvantage.

The new Change Labs headquarters will rise on a parcel of land on Main Street in Tuba City, just down the street from the office of the local Navajo chapter that helped make the organization’s long-time dream a reality.

On May 2, the local Navajo government chapter To’Nanees’Dizi offered land to Change Labs, which for years had been trying to find a place to build a new facility for its business incubator services.

“I’m so grateful to their leadership (in local government); the chapter president, the community planner were the two that championed this cause,” Fleming said. “It’s a really great location. I couldn’t have asked for anything better, really.”

Previous attempts to secure property ended in failure. While Change Labs initially secured a business site lease as a tenant in a bigger planned property in 2017, it eventually broke off to try to acquire its own land in 2019 after the deal languished “on the back burner,” Fleming said.

Along the way, the organization tried to find space in one of Tuba City’s strip malls, but thanks to a legal dispute between the Navajo government and the strip malls’ private co-owners, that process also fell through. Efforts to solicit local private landowners for a land lease were similarly unsuccessful.

An attempt to get the Bureau of Indian Affairs to release one of its unused buildings in Tuba City for rehabilitation and reuse fell on “deaf ears” in Congress, according to a report by Change Labs.

“We went through plans A, B, C, D and E,” Fleming said. “Then the chapter reached out to us and offered us some temporary land. They recognized the service we provided to the community was valuable and also needed, especially now when so many businesses were trying to reopen and recover from the pandemic.”

Fleming believes To’Nanees’Dizi saw itself as a last resort for Change Labs.

“We hadn’t considered approaching the chapter because we figured there was no way they would step in,” Fleming said. “I think the chapter did this because they saw us struggle. I don’t think it would have gone through if we had gone to them first. It was a shocking twist and surprise, but it ended up being the most fruitful path forward.”

According to a report by the Center for Indian Country Development at the Federal Reserve Bank of Minneapolis, the federal government holds about 60 million acres of reservation lands in trust, which means those lands may not be conveyed or sold without the government’s consent.

While the 2012 Helping Expedite and Advance Responsible Tribal Homeownership (HEARTH) Act loosened federal restrictions on commercial leases and deferred more authority to tribal government, those tribes still implement leasing regulations approved by the Secretary of the Interior.
The situation makes for a long, onerous process to start a business on reservation land, Fleming said.

“People are at a disadvantage in so many different ways, and the crux of it is the land,” Fleming said. “It’s key in solving a lot of the shared challenges that Native entrepreneurs have.”

Those challenges include everything from finding a place to locate an office or storefront to simply having land to offer as collateral for a loan, the absence of which contributes to a chronic lack of access to capital for Native entrepreneurs.

A July 2020 report published by the University of California Los Angeles’ Anderson Review points directly to trust lands as an impediment to accessing capital in Indian Country. Because Native Americans cannot easily transfer ownership of their lands and lack equity in their property, they cannot use it as collateral for a loan.

“I attribute the land issue to the root cause of a lot of business issues. Access to finance is a huge fallout of the land issue,” Fleming said. “If people have no collateral, then they’re not good candidates for traditional loans.”

“It can be a cumbersome process,” Gibbs said, noting the tight grip of federal regulations for any on-reservation real estate transactions. “Like any federal agency, sometimes you get a quick turnaround and sometimes it takes a long time.”

The process stretches out lease applications well beyond the point many entrepreneurs can handle, a problem amplified by the lack of access to startup capital, Fleming said. She noted that each attempt to secure land for a headquarters cost Change Labs about a year’s worth of time.

“It’s a process that’s too long and too cumbersome for most people to survive,” Fleming said.

‘A slap in the face’

The entrepreneurial problem extends to places like Tuba City, where amenities like stores and stations are limited because of the difficulty of getting a business off the ground.

“It’s visible throughout our community. You drive through Tuba City with a population of 8,000 people and you see two strip malls, mostly fast food joints, three gas stations, an Autozone, a dollar store and two hotels,” Fleming said. “Meanwhile, Page, Arizona nearby has all kinds of community amenities that are basically impossible for us because of the land and how difficult it is for entrepreneurs to access land to further their mission.”

The multiple abandoned BIA buildings in Tuba City are especially emblematic of the problem, Fleming said. Because the buildings aren’t in habitable condition, they can’t be used for businesses. Moreover, because the BIA still owns the buildings, tribal authorities can’t demolish them to clear up the land for other uses.

“Only federal dollars can be used for cleanup,” Fleming said. “It’s kind of a slap in the face, I think.”

Change Labs had planned a campaign around cleaning up and releasing the BIA sites for Navajo use. The group’s graphic designer pasted photos of the business incubator’s cohort members over photographs of the dilapidated buildings, but the campaign ground to a halt in the face of COVID.

“COVID hit, and I think everybody’s priorities shifted … and it’s kind of fallen to the backburner,” Fleming said. “It shouldn’t be. All of the federal funding is about relief and recovery, and to me, in Native communities getting access to land is a critical part of recovery.”

Fleming said many people would be surprised to discover the lack of control many tribes have over their own reservations.

Fleming said Change Labs was “grateful” that its search for land finally succeeded. With a more permanent home, Change Labs can continue its programming, in which a yearly cohort of Native entrepreneurs learn more about running and scaling up their businesses.

“We’re eyeing a space in Shiprock to basically create a replica of the space in Tuba City,” Fleming said. “If this space goes well, we’re planning on going back to the chapter and asking if we can have more land.”

Fleming hopes Change Labs can lead the way amid a potential wave of new Native American business incubators across the country.

She cites the amount of interest in the Native American Business Incubators Program Act, which passed in October 2020 and allocated $5 million in funding to start and support programs. As Change Labs grows and continues to refine its incubator model, it plans to share its successes and struggles as a way of guiding other fledgling programs.

“I know there’s a lot of other tribes that want to create incubators,” Fleming said, noting about 90 people participated in a recent federal educational meeting about the program and accessing funding. “The more information that we can put out there that explains how our programs work, how much they cost, what expertise is required, the struggles that we’ve run into, all of that is going to be valuable information and assets.”