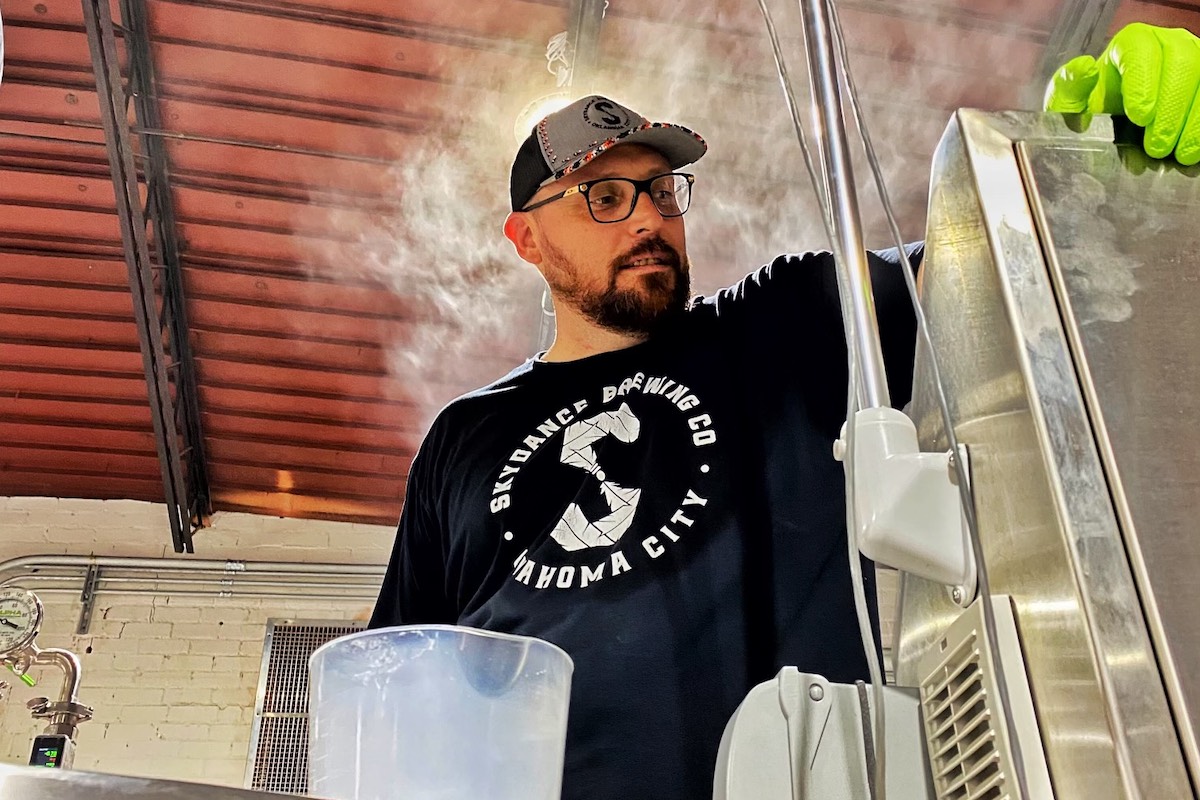 OKLAHOMA CITY, Okla. — Skydance Brewing Co. got its start as a member of brewing co-op in 2019. Now two and a half years and a nearly $1 million investment later, the company has moved into its own production and taproom space, and owner Jacob Keyes couldn’t be happier.

Not only does Skydance now have its own taproom, but the brewery also has more control over its equipment and production as a result of having its own space, versus when it operated from the shared Brewers Union facility in Oklahoma City.

“It was tough at the old place. We got to use the equipment, but it’s like having roommates in college: It’s kind of tough to cohabitate with other people,” Keyes told Tribal Business News. “Everybody’s idea of clean is different, scheduling was tough, and then the location was really tough and made it hard to sell much beer through the tavern.”

Now Skydance Brewing occupies leased space on 7th Street in Oklahoma City’s downtown district, following a hectic two-year construction period during a pandemic. The brewery celebrated its grand opening on Oct. 2 and has been met with an enthusiastic response from patrons in the days since.

“It’s just been crazy. We’ve been busy every night,” Keyes said. “We have a really nice patio space, and the patio was full every night. It’s been really good. This week we’re kind of low on beer because we’ve sold through so much more beer than we’ve ever expected.”

Sales through Skydance’s new taproom build on distribution of the company’s beers across Oklahoma. Skydance beers are sold in bars, restaurants, casinos and retail establishments across the state.

Keyes, a citizen of the Iowa Tribe of Oklahoma, has been especially pleased with Skydance’s retail distribution, noting the beers are available at many Walmart stores in Oklahoma.

According to a demographic survey by the Brewers Association, a Boulder, Colo.-based trade group, only 0.4 percent of brewery owners identified as Native American. That makes Skydance’s presence on the shelves at major retailers a point of pride, Keyes said.

“Last we checked, we were the only Native American-made (beer) on the shelves at Walmart,” Keyes said.

Keyes also expects the new brewery and taproom to facilitate a surge in production. Skydance’s new 15-barrel brewhouse should produce 1,000 barrels of beer in its first year, up from about 350 barrels when the company was operating from the co-op facility.

While distribution remains a pillar of Skydance’s business model, Keyes expects to leverage the significantly higher margins from taproom sales to grow the business going forward.

“Taprooms are where the margins are,” Keyes said. “The taproom has been busy every day, and that allows us to make a little more money.”

For craft breweries, their most profitable sales are over their own bar, largely because they can capture the entire sale without the product going through the distribution or retail tier.

Skydance is growing amid an overall challenging year for the craft beer industry in which volume sales dipped by 9 percent in 2020 because of the COVID-19 pandemic, according to the Brewers Association, which tracks only independent craft breweries. Meanwhile, retail dollar sales plunged 22 percent to $22.2 billion.

While the pandemic stunted a long-running growth spurt for the craft beer industry, the number of taprooms continued to expand in 2020, climbing from 3,159 to 3,471, according to the Brewers Association.

The origins of Skydance Brewing stem from Keyes’ father teaching him about homebrewing years ago. The two talked about eventually starting a brewery together, particularly after Keyes took a job at a brewery while he was in college.

In 2013, Keyes’ father became ill and moved to a nursing home, and Keyes started practicing his dad’s recipes, which were mostly dark beers, like oatmeal stouts. After his dad passed away, Keyes resolved to start that brewery they’d dreamed about.

By that time, consumer preferences in beers had changed. Oatmeal stouts and dark beers had given way to the market dominance of IPAs, which proved to be a lucky break for Keyes.

“We’ve started focusing on IPAs and double IPAs; we’ve tried to get creative with hops,” he said. “It just so happens to be that those are the beers I like, and those are the most popular, so that helps a lot.”

Coming to that realization helped Keyes focus his plans for Skydance, rather than aim to please everybody.

“When we started out at the co-op, I tried to brew a wide array of beers. I wanted to try to have a beer for everybody,” he said. “Over time, I realized you have to brew what you like. If you brew beer you actually want to drink, it ends up showing in the product.”

That’s a lesson aspiring Native brewers or entrepreneurs should take to heart, according to Keyes.

His best advice: “Make sure you love what you’re doing. There’s going to be times that are so difficult that if you’re not in love with what you do and with the process of getting what you want, then it’s going to be really easy to give up.”