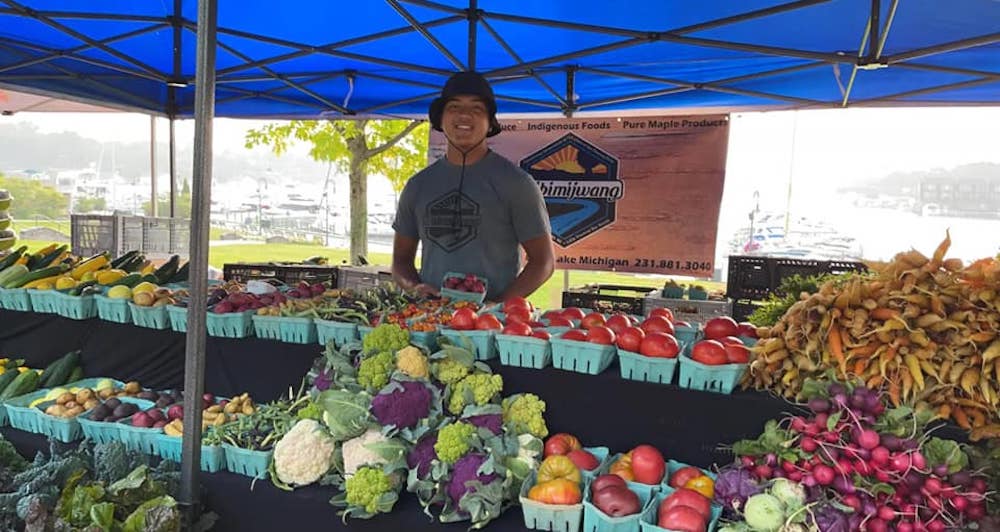 “The way we phrase it is ‘getting back to our responsibilities,’” Jondreau said.

Social media and online sales has fueled both operations as part of a growing availability of Indigenous food resources nationwide.

[EDITOR’S NOTE: This story originally appeared in Great Lakes Echo. It is republished with permission.]

“With colonization and boarding schools, a lot was ripped away from us,” said Joe VanAlstine, who is the chair of Ziibimijwang, Inc. “For us to come back and reclaim that, people are just hungry for it, no pun intended.”

VanAlstine and his colleagues considered how they might use the market to reclaim their Odawa Indian identity. Located at the tip of Michigan’s mitten, Mackinaw City was historically the trading hub of the Great Lakes region. Now, it’s a gateway to the Upper Peninsula that has become a tourism hotspot.

“You can go and buy one of those dreamcatchers made in China or you can come to Minogin and buy a real one, made by a real Native American,” VanAlstine said.

Jondreau, the owner of Dynamite Hill Farms, said its origin relates more to his relationship with land as a tribal citizen.

“As Ojibwe people, it’s our responsibility to take care of this place and maintain a relationship,” he said. “You can’t do that if you’re never there and not participating, just like a personal relationship.”

Dynamite Hill Farms was established in 2019 after Jondreau quit his teaching job at Michigan Technological University to continue tapping maple sugar and harvesting wild rice. He uses the term “business” loosely. The farm is a family function he runs with Bressette, their children and the occasional volunteer.

“We feel that’s the true way to sustainability – the small scale,” Jondreau said. “We do everything on a less official basis. People will ask questions and we’ll say, ‘You know what, why don’t you just come and camp out here for the weekend? Come out here and haul some sap with us and we’ll have some conversations.’”

As former teachers, education is at the center of everything he and Bressette do. Though Dynamite Hill products are available for purchase on Facebook, Jondreau prefers to make sales in person so he can explain the process behind the food they harvest.

Jondreau’s alternative approach to business is what host Andi Murphy of “Toasted Sister Podcast,” a radio show about Native American food, calls “Indigenomics.” Making a profit is often idolized in the current economic system, she said. “But in Native America, we’re always thinking about our community and making it a better place and situation. That’s the main difference.”

Building Indigenous food sovereignty by reclaiming the presence of Indigenous products within the Mackinac area community and across the country is Ziibimijwang and Minogin Market’s mission, VanAlstine said. The farm also packs food boxes for tribal elders.

Additionally, Ziibimijwang partners with Indigenous chefs who use the farm products in their kitchens, VanAlstine said. Crystal Wahpepah, the first Indigenous chef to appear on the Food Network show, “Chopped,” is one of Ziibimijwang’s regulars. “She exclusively buys maple products from us. So we ship them all the way to California for her.”

The farm is also in partnership with Tocabe, a contemporary Native American restaurant in Denver. The restaurant is soon to launch Tocabe Express, a ready-to-cook meal delivery service that will include the ingredients and instructions needed to make the restaurant’s most popular dishes at home. A featured Tocabe Express meal is the maple-rubbed bison ribs.

“In that rub they use our maple sugar,” VanAlstine said. “So you’ll get maple sugar from us and they’ll tell you where all the ingredients are from.”

Reclaiming Indigenous food is a way for VanAlstine to connect with his ancestors.

“I’m eating the same food that they did,” he said. “And that brings me closer to them, knowing that they tasted the same fish I tasted, from the same river and the same lakes. For me that’s the joy – having more of our people feel that way.”

Whether through a hands-on education approach or through nationwide partnerships, Dynamite Hill Farms and Minogin Market are growing the presence of Indigenous farming wisdom in the United States.

“Getting excited about these Indigenous flavors, that’s the most important part of food sovereignty,” Murphy said. “And that doesn’t happen without those entrepreneurs who are making it available.”

This story originally appeared in Great Lakes Echo, a project of the Knight Center for Environmental Journalism at Michigan State University. Great Lakes Echo fosters and serves a news community defined by proximity to and interest in the environment of the Great Lakes watershed. For more information, visit greatlakesecho.org.