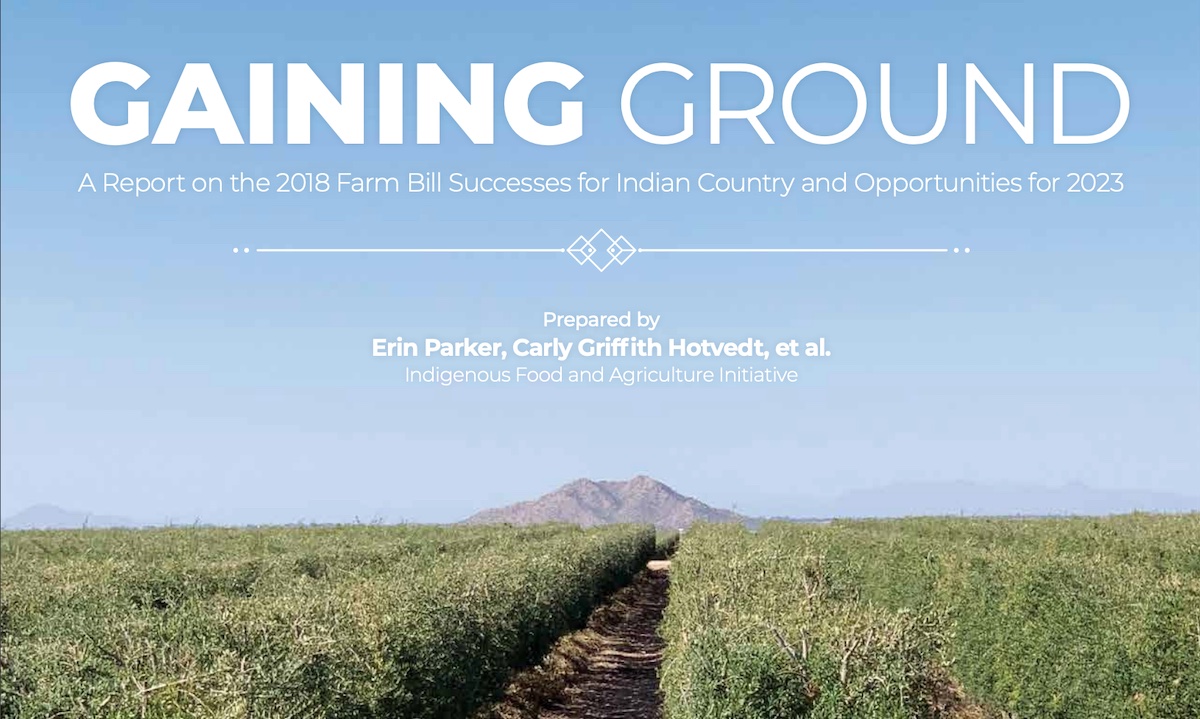 The Native Farm Bill Coalition has released a new report with more than 150 suggestions on improving agricultural opportunities in Indian Country ahead of negotiations over the 2023 Farm Bill.

The report, titled “Gaining Ground: A Report on the 2018 Farm Bill Successes for Indian Country and Opportunities for 2023,” is authored by Indigenous Food and Agriculture Initiative executive director Erin Parker and associate director Carly Hotvedt. The report was funded by the Native American Agriculture Fund, the Shakopee Mdewakanton Sioux Community, and MAZON: A Jewish Response to Hunger.

Amid myriad suggestions for climate-smart farming and rural development support, Gaining Ground’s policies run the gamut from improving loan accessibility through the U.S. Department of Agriculture to expanding and enshrining self-determination policies for food distribution and marketing.

Parker told a press gathering last Tuesday that the 2018 Farm Bill was a major advance for Native agriculture. The coalition has aspirations for a similar surge in 2023’s Farm Bill by building on those successes.

“This new report reinforces that Indian Country’s relationship with the Farm Bill has always been complex,” Parker said. “As we saw in the 2018 Farm Bill, this significant legislation has numerous opportunities for Indian Country agriculture, including a strong acknowledgment of tribal sovereignty and the power of tribal governments to express that sovereignty in the space of food and agriculture for the benefit of their citizens, producers and communities.”

Tribal sovereignty remains the cornerstone of Gaining Ground’s suggested policies. Many suggestions for both food security and economic development — two major issues for agricultural producers whether owned by individuals or tribals — center on the USDA’s “638 self-determination” program.

The 638 program stems from the 1975 Indian Self-Determination and Education Assistance Act, which allows tribes to assume responsibility for administering federal programs to their citizens.

Those programs have been a rousing success, Parker said during the press briefing. Now, the Native Farm Bill considers it a major goal for 2023 to build statutory support that makes those programs permanent and ubiquitous.

“638 is a really incredible acknowledgment of tribal sovereignty,” Parker said. “638 today enables tribal governments to make decisions about what kinds of foods should be sourced for food distribution programs on Indian reservations, so that’s really acknowledging tribal sovereignty and the role that tribal governments have always played in making sure that their citizens were served and had access to culturally appropriate, traditional, healthy food.”

The coalition also advises expanding which programs fall under the 638 jurisdiction by including the federal Supplemental Nutrition Assistance Program, as well as the Emergency Food Assistance Program. Currently, tribal governments cannot directly administer either of those initiatives, which given SNAP’s prevalence in the Native food security safety net, inhibits tribes’ ability to provide traditional foods to those most in need, Parker said.

“Over 25 percent of American Indian and Alaska Native people rely on SNAP monthly, and that was before the pandemic greatly impacted food insecurity,” Parker said. “SNAP is a really significant part of the tribal food safety net, but tribes are not eligible to administer it. The 2023 Farm Bill could change that and close that gap.”

The Gaining Ground report also elaborates on prior discussions surrounding Indigenous access to USDA loan programs, as well as the department’s initiatives around markets and sourcing.

Credit access remains a chronic issue in Indian Country even after settlements such as the 2010 Vilsack v. Keepseagle decision, which found the USDA discriminated against Native borrowers in their loan programs. Funding from that decision eventually established the Native American Agriculture Fund in 2018.

Between the complexities of land ownership on reservations and a lack of banking infrastructure in rural areas, lenders are often “uncomfortable” in working with Native borrowers, Hotvedt said.

“The way we hold land can be very different from what a lot of these lenders are comfortable or familiar with, and being able to not perceive that negatively from a risk management perspective can be really critical,” Hotvedt said. “This access to credit discussion is not new and not novel. We know that there continue to be challenges in relation to credit opportunities for producers.”

Addressing some of those challenges can begin with appointing a tribal advisory council for the USDA, a suggestion from the 2018 Farm Bill that has yet to be implemented and is included again in the suggestions the Gaining Ground report makes for the 2023 rewrite.

Establishing a tribal advisory committee could provide the USDA some understanding of how to work with Native producers more directly, offering greater access to departmental programming, Hotvedt said.

“That has yet to be seated, so we will continue to ask for that tribal advisory committee be seated to help advise Secretary Vilsack on how these programs are working, how the agency can interface with BIA and other federal programs, and how we can really streamline the approach for accessibility and workability for existing USDA programs and any new programs,” Hotvedt said. “We encourage that committee to be seated so that we have a better ability to influence and advise USDA authority.”

That may alleviate problems tribal farms face in getting started, but the report’s authors also offer thoughts on how to help Native producers get their products out to wider markets.

While the Market Access Program serves as one of the strongest supports for Indian Country in the 2018 Farm Bill, Parker and Hotdvedt write, funding remains stifled.

The Intertribal Agriculture Council (IAC), for example, only received $367,000 for its international trade support efforts out of $176 million allocated to MAP recipients in 2022.

“Substantially increasing the funding available to the IAC to coordinate and administer this program for Tribal audiences will allow more Tribal food and agriculture businesses to benefit from the program,” according to the report.

In regards to domestic markets, Hotvedt also restated the often-discussed goal of applying the Buy Indian Act to USDA’s sourcing programs, ensuring that Native producers are considered when the agency secures food for its distribution initiatives.

“That’s going to be a critical opportunity that we hope can be recognized and brought to fruition to really get Native foods on Native plates,” Hotvedt said. “We know the Farm Bill can really provide that support so that tribes can really expand their offerings and create new opportunities in their communities.”