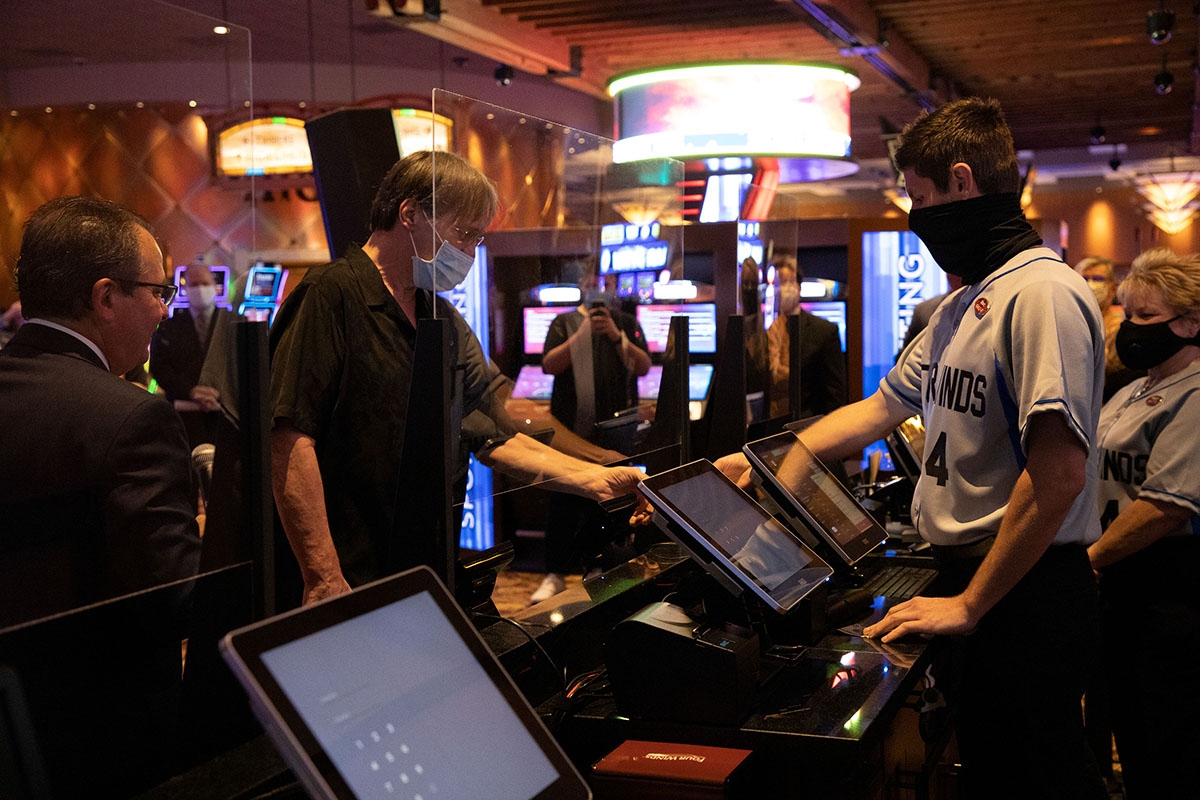 UPDATE: After this report was published, the Sault Ste. Marie Tribe of Chippewa Indians opted to close its five Kewadin Casinos for three weeks. The story has been updated.

Most tribal gaming operations in Michigan will remain open with some modifications even as the state imposes a new round of restrictions on commercial casinos and other sectors in a move aimed at curbing spiking cases of COVID-19.

On Sunday, Gov. Gretchen Whitmer’s Department of Health and Human Services announced that all three commercial casino operations in Detroit will close as of Wednesday, along with in-person dining at bars and restaurants, movie theaters, indoor ice rinks and bowling alleys.

As sovereign enterprises, the 24 tribally owned casinos that operate in Michigan do not have to comply with the mandated closures. While all tribal casinos in Michigan voluntarily closed in the spring at the same time the state issued a stay-at-home order, most are planning to stay open this time around, citing enhanced protocols and their track record for safety.

Among the exceptions: Bay Mills Resort & Casinos in Brimley, Mich., which plans to close for three weeks at noon on Wednesday, Nov. 18.

“This pandemic is unpredictable,” Bay Mills Indian Community Chairman Bryan Newland said in a statement. “Fortunately, we budgeted CARES Act funds in anticipation another shutdown might occur. We believe in protecting our community and our employees.”

As of midday Wednesday, the Sault Ste. Marie Tribe of Chippewa Indians also opted to voluntarily close its five Kewadin Casinos in Michigan’s Upper Peninsula, with an expected reopening date of Dec. 9.

However, most other tribal gaming operations say they believe their precautions make it safe to remain open during the current spike in COVID-19 cases and hospitalizations.

“We are confident that the recent significant increase in the number of positive COVID-19 cases is not being influenced by FireKeepers’ operations because of the mitigation steps we have taken and which we continue to rigorously enforce,” Kathy George, CEO of Battle Creek, Mich.-based FireKeepers Casino Hotel, said in a statement provided to Tribal Business News.

FireKeepers, which is owned and operated by the Nottawaseppi Huron Band of the Potawatomi, will remain open under its “strict protocols,” and will continue to “vigilantly review these protocols in cooperation with health officials and the Tribe’s Gaming Regulators to determine if additional controls or actions are needed to support the effort to slow down the spread of this virus,” George said.

“We do not believe that closing the Soaring Eagle Casino & Resort, Saganing Eagles Landing Casino & Hotel and The Slot Palace & Bingo Hall will reduce the spread of the Coronavirus. Should new information emerge that indicates otherwise, we will revisit this decision,” the tribe said in a statement.

“Like other governments we are continually monitoring the spread of COVID-19 and have taken extensive health and safety precautions to help protect our Tribal Citizens, our employees that work in our Tribal Government, as well as our Four Winds Casinos employees, and guests that visit our four casino locations in Michigan and Indiana,” according to a statement from the Pokagon Gaming Authority, which added that it “will continue to be diligent with the current safety and sanitation procedures as the health and safety of our employees and guests remains our top priority.”

The Lac Vieux Desert Band of Lake Superior Chippewa Indians’ Northern Waters Casino Resort in Watersmeet and the Grand Traverse Bay Bands of Ottawa Indians’ two operations — Turtle Creek Casino and Hotel in Williamsburg and Leelanau Sands Casino & Lodge in Peshawbestown — did not indicate any plans to close on their respective websites.

The closures of the commercial casinos come amid growing concern from state officials and health systems across the state that the escalating caseload could soon overrun the capacity for hospitals. As of Nov. 15, the statewide positivity rate for COVID-19 reached an average of 12.5 percent, Chief Medical Executive Dr. Joneigh Khaldun said in a press conference, noting the virus was “spreading like wildfire.” Health experts say the test positivity rate should be around 3 percent to manage the spread of the virus, regional business publication MiBiz reported. As of Tuesday, the state reported a total of 272,034 positive cases of COVID-19 and 8,128 deaths.

As cases continued to rise, some tribes opted to take certain actions to help to limit possible exposure.

For example, the Match-E-Be-Nash-She-Wish Band of Pottawatomi (Gun Lake Tribe) has reduced hours of operation at Gun Lake Casino in Wayland, Mich., located about 25 miles south of Grand Rapids, the state’s second-largest city where cases have been surging beyond levels experienced in the initial spring wave of the virus.

Instead of being open 24 hours a day, Gun Lake Casino will now close between 5 a.m. and 9 a.m. As part of its “Play It Safe” initiative that takes effect on Nov. 20 and runs until Dec. 9, Gun Lake Casino also placed plexiglass barriers between slot machines or spaced them out to maintain distance between patrons and closed all bars and restaurants. Additionally, the casino closed its retail sportsbook counter and most table games, except for the High Limit Room, which will have limited occupancy.

“Gun Lake Casino is a critical business to the Gun Lake Tribe and to the local communities that we serve,” said Alexis Bolo, the operation’s community and public relations coordinator. “We are proud to provide financial stability and healthcare benefits for over 900 Team Members, which will continue during this time.”

At the Little River Casino Resort in Manistee, near the Lake Michigan shoreline, the Little River Band of Ottawa Indians reduced hours of operation to 8 a.m.-10 p.m., effective Nov. 17 until “at least” Dec. 8. Little River also closed all table games, turned off every other slot machine where distancing was not possible and closed its retail sportsbook, although on-site sports betting will be available.

Larry Romanelli, ogema of the Little River Band of Ottawa Indians, said tribal officials carefully considered its options this week, all while the effects of the spring closure continue to weigh heavily on the tribe.

“As you know, business is tough and LRBOI wants to assist the Governor and also help keep citizens safe but we are also up against decreased revenues from closing before,” Romanelli said in an email to Tribal Business News.

According to previous estimates from MiBiz, Michigan tribes are believed to have lost more than $200 million during six to eight weeks of closures beginning in March 2020. Gaming revenue generally accounts for a significant portion of tribes’ operating budgets, which fund various services, ranging from health care and education to public safety and housing.

Elsewhere in Michigan, the Keweenaw Bay Indian Community closed table games at its Ojibwa Casinos in Marquette and Baraga and the Hannahville Indian Community canceled all bands and entertainment through Dec. 10 and switched restaurants to take-out at its Island Resort & Casino in the Upper Peninsula town of Harris. Likewise, the Little Traverse Bay Bands of Odawa Indians canceled entertainment and closed its sports bar at Petoskey-based Odawa Casino.

A common theme in all the tribal casinos’ plans is a commitment to following best practices and guidance aimed at keeping people safe. To some tribal leaders, the only safe option is shutting down.

In a statement to Tribal Business News, Sault Ste. Marie Tribe of Chippewa Indians Chairperson Aaron Payment said he supports “shutting down all non essential operations in collaboration with the Governor’s order to stave off the spread of this deadly virus during an exponential outbreak.”

“If we save just one life, especially an Elder, it will be worth it,” Payment said.

--
Tribal Business News Publisher Levi Rickert contributed to this report.
--
EDITOR’S NOTE: This story has been updated with comment from the Pokagon Gaming Authority and to note that after this report was published, the Sault Ste. Marie Tribe of Chippewa opted to close it five Kewadin Casinos.