S.D. tribal college part of NASA plan for housing on moon and Mars 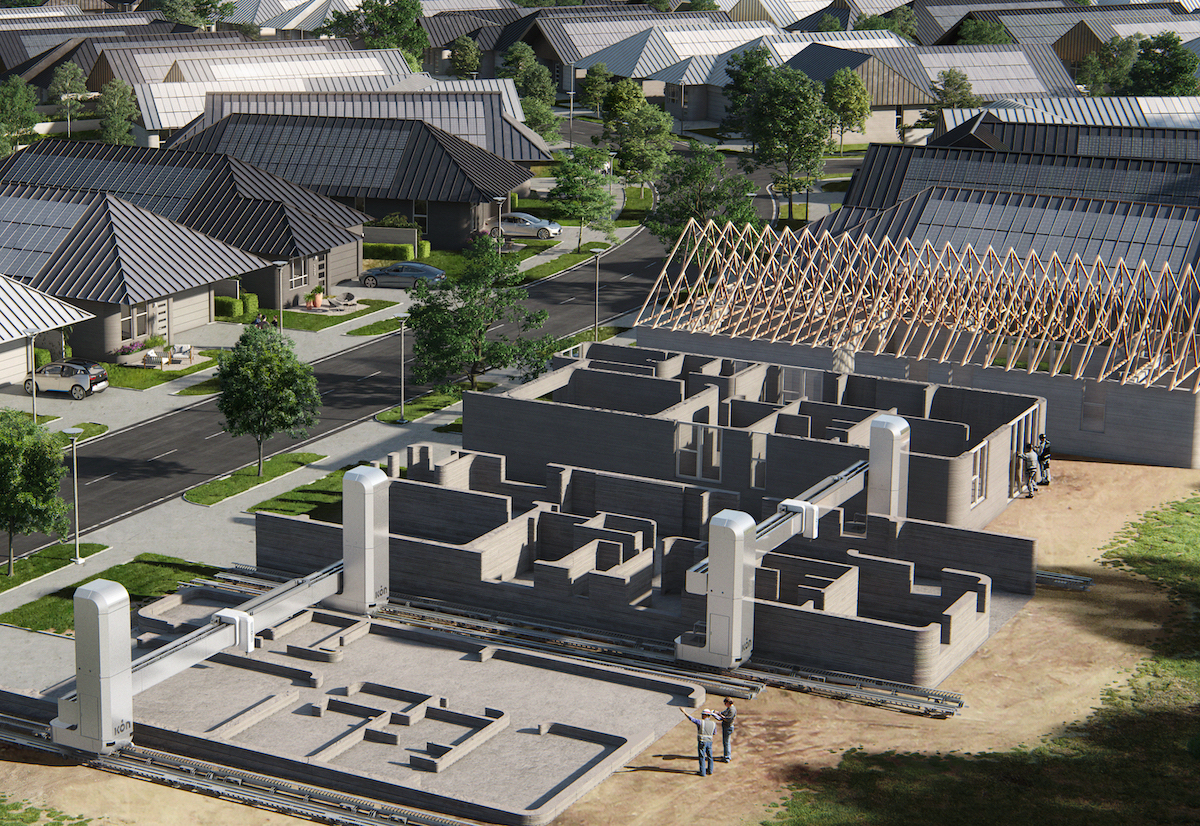 Sinte Gleska University, a tribal college in Mission, S.D., may soon enter into a partnership with NASA that would result in new science-education programs, more affordable housing for state reservations and the development of 3D housing that could someday be used on the moon or Mars.

The National Aeronautic and Space Administration has already committed to the partnership and allocated an investment of roughly $250,000 to the project that has a working title of “Enhancing Research in Additive Manufacturing Processes for Lunar Application and Planetary Use in Tribal Housing Development.”

On Monday, Feb. 14, the South Dakota House Commerce and Energy Committee voted 12-1 to approve a bill to provide $300,000 in state matching funds to satisfy the NASA project requirements. The bill now heads to the state House Committee on Appropriations.

NASA hopes to enlist faculty, staff and students at Sinte Gleska and other South Dakota colleges to use 3D printing technology to design and construct concrete homes that can be built rapidly and at roughly a third of the cost of conventional wood housing. The homes would provide new affordable housing options in high-need reservation areas of South Dakota. NASA would then monitor the condition of the homes in high heat and freezing temperatures to determine if the homes can withstand the environment on the moon or Mars.

NASA also wants to learn whether 3D housing can be built remotely, possibly on another planet, by designers on Earth.

The university and three Indian tribes — the Yankton, Crow Creek and Oglala Lakota Sioux tribes — form the South Dakota side of the partnership. The total project funding will include purchase of a high-tech 3D printer that is used to design homes that are built through layered liquid concrete applied by machines.

The proposed project is seen by supporters as a way to improve the lives and prospective futures of thousands of Native Americans in South Dakota and make lasting, positive change in their communities where affordable housing is a critical need.

The program is also seen as a way to create a cutting-edge curriculum for students at Sinte Gleska and other South Dakota universities, and possibly spur creation of other industries related to 3D home construction.

“It’s a pretty exciting opportunity for the state and the tribes to work together in a possibly game-changing economic development project,” said Ross Garelick Bell, a registered lobbyist in South Dakota who has spent five years bringing all sides of the project together. “They [Sinte Gleska] could become a major player in the 3D housing industry, and it would be putting South Dakota on the map in terms of learning these new technologies.” 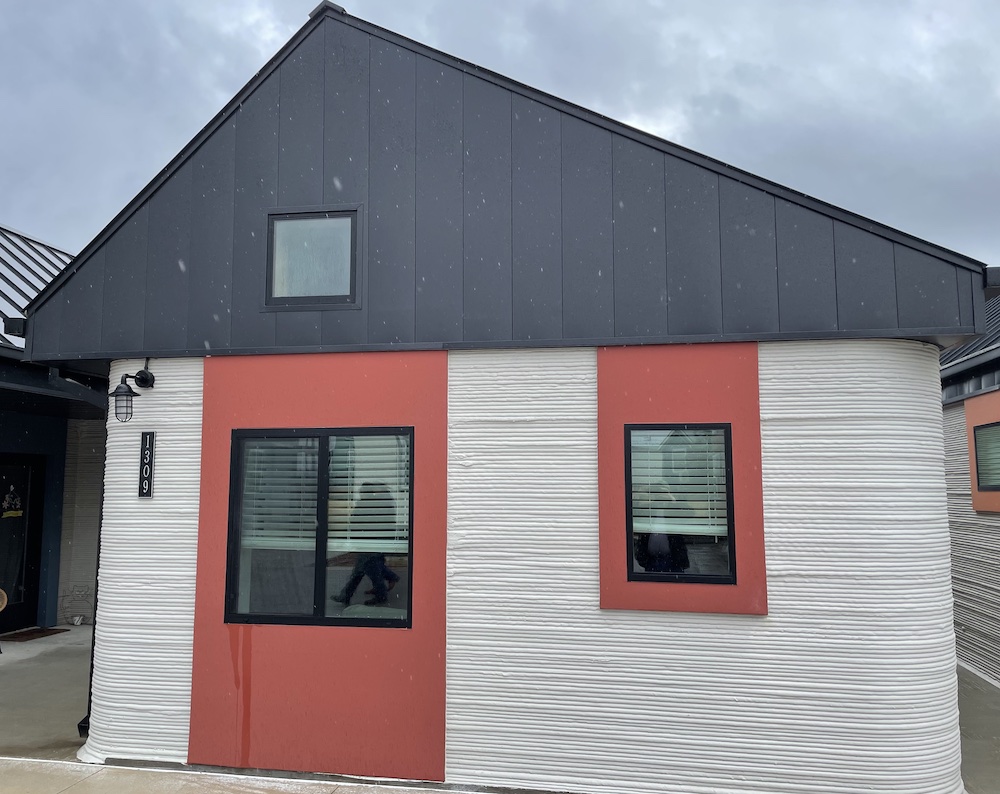 A complete 3D designed home is constructed from a concrete-like material, which can be seen in layers on the outside walls, but is finished to look like a traditionally built home and not a typical concrete block home. (Photo: Courtesy Ross Garelick Bell)The use of 3D printers in homebuilding, also known as “additive construction,” is still relatively new and is similar to other 3D printing technologies that use computer-aided design to create plans for products made from plastic, liquids, concrete or solid powders.

In 3D-printer home construction, designs for exterior and interior walls and other components are programmed into a computer. The design data is then sent to a machine with an exterior arm that quickly expels liquid concrete into uniform layers that ultimately form vertical or horizontal walls or panels, including rounded or curved features. The homes can then be topped with a traditional roof and siding, and interior walls can be covered with paneling or wood so concrete is not visible. Walls can be constructed with hollow cores that can be filled with insulation.

Companies that use the technology say homes can be built in a few days, potentially at a third of the materials cost of a wood-frame or hand-built home.

NASA is investing money in 3D printing in hopes that the technology can be used to build structures and possibly homes on the moon and Mars. The investigative lunar project is called Artemis Mission, and the Martian project is called the Mars Exploration Program Analysis Group, or MEPAG. NASA also has a project team called Moon to Mars Planetary Autonomous Construction Technologies.

As proposed, the Sinte Gleska project could potentially use 3D printer technology supplied by ICON, a Texas-based home manufacturing and research firm that describes itself on its website as “the construction technologies company using construction-scale 3D printing to tackle the global housing crisis and prepare to build on other worlds.”

ICON’s 3D printer series, known as Vulcan, has already been used to design and construct six small homes for formerly homeless residents of Austin, Texas, as well as several other larger homes now being occupied in the region, a 3,800-square-foot concrete barracks at Camp Swift in Bastrop, Texas, and a 20-foot-diameter concrete rocket landing pad for NASA that took only 21 hours to design and construct.

ICON’s latest project is to use 3D printer technology to build 100 concrete homes in conjunction with national home-building company Lennar. The company is working with NASA to build a structure called Mars Dune Alpha, a 1,700-square-foot building that is simulating mission operations on Mars.

Shawn Bordeaux, director of the Institute of Tribal Lands at Sinte Gleska University, said the project with NASA would provide the tribal college with high-tech resources and enhance its ability to engage in new research that will increase job prospects for students, mostly Native Americans, in science and technology fields.

“It would be awesome for our students because it will provide them with a skill set that will make them very employable,” said Bordeaux, who is also a Democratic state representative from Mission. “People will seek them out to do this kind of work in the future.”

Bordeaux said the houses that will be built would help alleviate a lack of good-quality affordable housing that has existed for years on the Rosebud Indian Reservation and in other Native communities and reservations.

“It’s about research, but it’s also about housing, because we need to fix our housing program,” Bordeaux said.

The partnership with NASA would also give Sinte Gleska and South Dakota Indian tribes new prestige and a sense of pride of being part of a forward-looking project with truly interplanetary objectives.

“It’s the mission to Mars,” Bordeaux said. “We are literally getting funds to aid a mission to Mars; we’d be part of that effort, and how exciting is that?”

Rep. Rocky Blare, R-Ideal, the prime sponsor of HB 1281, said the project has the potential to jump-start educational opportunities and economic development in a remote part of South Dakota where growth has been slow.

“For the segment of the population and areas this will be focused on, in central South Dakota and on reservations, any opportunity like this will be celebrated,” he said.

Blare said he is confident the funding allocation for the project will pass in committee and hopefully be approved by the full Legislature.

“People are excited to see what this is,” he said. “This is pretty exciting and should go through.”