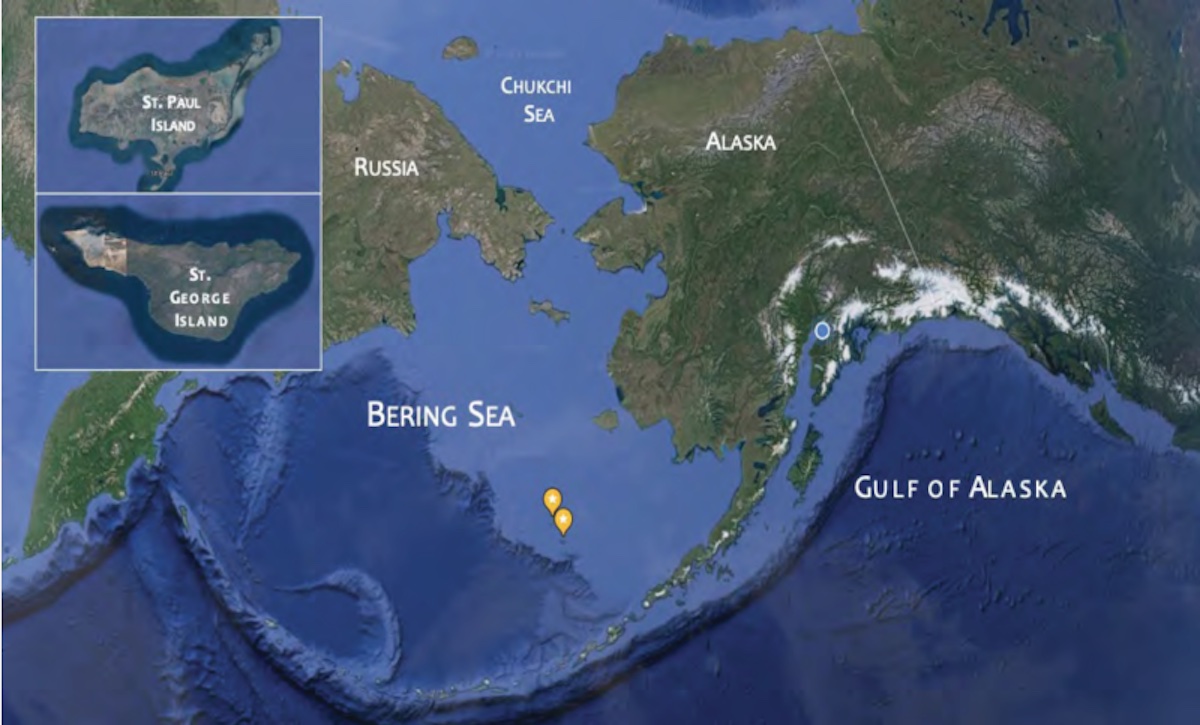 ST. PAUL, Alaska — The Aleut Communities of St. Paul Island and St. George Island, collectively known as the Unangax̂, sit a few miles apart in the Bering Sea as part of the group of Pribilof Islands, about 200 miles off the coast of mainland Alaska. It’s that proximity to the North Pole has placed the islands at the leading edge for experiencing the effects of climate change.

Dwindling animal populations and a lack of sea ice have further afflicted an ecosystem already affected by commercial fisheries and confusing regulations, according to Lauren Divine, director of the Aleut Community of St. Paul Ecosystem Conservation Office.

Leadership in St. George first noticed the changes in the islands’ ecosystem and brought their concerns to colleagues in St. Paul. 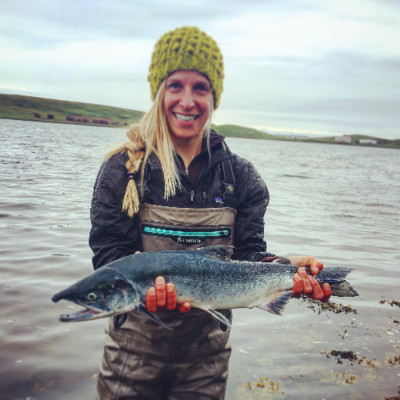 The tribes’ answer is a push for more involved, government-to-government co-management of their islands’ ecosystem under a proposed program called the Pribilof Islands Marine Ecosystem (PRIME) Initiative.

“We’re viewed as one of many stakeholders, which tribal governments shouldn’t be stakeholders, they should be seen as sovereign nations, government-to-government relationships,” Divine said. “I think establishing formal co-management will establish that formal relationship for the benefit of communities sitting at the table with the federal and state government in making decisions for the area.”

The PRIME initiative calls for a co-managed marine area, extending 100 nautical miles outward from the islands. The main goal focuses on conservation, particularly of marine life like fur seals, whose population has dropped to a quarter of their 2.1 million peak population.

The tribes want to maintain the fishing opportunities that support the local economy, but have a say maintaining a sustainable resource, Divine said.

“We want to keep our fisheries happening in a sustainable way. We want to include the tribal government as co-managers,” Divine said. “We want to ensure the area isn’t a (no-fishing) zone.”

The PRIME initiative proposes use of the National Marine Sanctuaries Act to establish the co-managed area, citing existing processes for fishery management through the North Pacific Fishery Management Council.

The National Marine Sanctuaries Act allows for the creation of federally protected areas with “special national significance.” The Unangax’s proposed co-management would be a unique arrangement within that framework and the first such area in the United States.

“There’s a lot of confusion around what these measures do and don’t do,” Divine said. “There’s a lot of misunderstanding and it has taken us working together to come to the conclusion that this was what we needed. The only way we see the changes being appropriate and meaningful for our communities was co-management.”

According to the National Oceanic and Atmospheric Administration’s guide on submitting a nomination, the proposal must satisfy four criteria, each of which the tribe contends it has met.

The first criterion calls for “special significance” of the proposed area’s natural resources and ecological qualities, such as major contributions to biological productivity or diversity, or maintenance of ecologically or commercially important species. The second criterion asks for special or sacred meaning to Indigenous populations in the region, while the third calls for “present and potential economic uses” that depend on conservation of the area’s resources. NOAA also asks nominators to describe the publicly-derived benefits of an area, such as aesthetic value and public access.

The Aleut Community of St. Paul’s nomination states in response that the Pribilof Islands serve as home to populations of increasingly endangered animals like the northern fur seal, the harbor seal, or the Steller sea lion, as well as “more than three million seabirds that flock to the islands during the summer months.”

The nomination contends that the Pribilof Islands’ ecological wellbeing also stands as part of the Unangax’ cultural heritage. The tribe writes that “without the islands’ rich marine resources there would be no community; the fate of the Pribilof Island communities, materially and spiritually, hangs in the balance as marine mammal and seabird populations continue to decline.”

A need for sustainable fishing to preserve both the habitat and other economic opportunities, like tourism, satisfies the third criterion, according to the tribe. Meanwhile, the tribe’s dependence on the ecosystem for “food, security, culture, and economic wellbeing” meets the fourth condition, according to the nomination document.

NOAA’s review process also calls for a range of management considerations, such as whether the area’s protection would provide educational and research opportunities, or would serve to stop “adverse impacts” from current or future uses.

The Unangax write in their nomination that a strong foundation exists for many of those considerations, such as existing monitoring efforts and educational institutions. (The tribe notes in the nominating document that a science summer camp recently discovered a new species of whale, for example.)

More pointedly, the document notes that the Unangax have been forced to become passive participants in managing their own communities.

So far, none of the marine sanctuaries established by the United States have led to Native co-management arrangements, but the tribes point broadly to Indigenous stewardship in other countries as an example of the practice’s success and as a potential model for a partnership.

NOAA’s guidelines don’t provide a specific timeline on the acceptance or response to a proposed nomination, but they do note that approved nominations go to the agency’s administrator for consideration. The Unangax are prepared for a protracted process.

“We recognize the political, social, economic, ecological, and logistical challenges of implementing co-management of the marine environment. It will require unique, challenging institutional arrangements built from a strong foundation,” the tribe wrote. “We believe that tribal government-led, dynamic conservation and management measures will result in the best management of the PRIME and provide for the inclusion of the Pribilof communities, fishing industry partners and other businesses, state and federal representatives, and other stakeholders throughout the process and implementation.”

The PRIME Initiative has garnered support from environmentalist organizations.

In a statement published on the Aleut community’s website, Senior Arctic Fellow Michael LeVine at Ocean Conservancy called the Pribilof Islands “one of the most important ecological areas on the planet.”

“Rapid change, including declines of fur seal, seabird, and fish populations, threaten both the ecosystem and Unangax̂ on St. Paul and St. George who have been, and remain, inextricably interconnected with the ocean and these marine resources,” LeVine wrote. “Designation of a National Marine Sanctuary can be an important step toward a Tribal-led, community centered, comprehensive management system that is inclusive of Indigenous Knowledge.”

Nonprofit collective Businesses For Conservation and Climate Action, writing in concert with American Sustainable Business Network, echoed the sentiment in a separate statement.

“The tribe’s approach to sustainable business opportunities, equitable Indigenous leadership, and visionary new approaches to conservation make this nomination truly groundbreaking,” said David Levine, American Sustainable Business Network (ASBN) president and co-founder. “(T)his is an opportunity, with national implications, for creating new approaches to Indigenous-led governance and a seat at the table for all business interests who depend on the conservation of this magnificent seascape for their wellbeing and livelihoods.”

Divine said one way or another, something has to change, and fast, as climate change wreaks more and more havoc on the Unganax way of life each year. Those changes are most visibly apparent in the lack of sea ice in recent years..

“(Sea ice) brings food, it provides for a whole diverse food chain in the Bering Sea. It resets and sustains the ecosystem each year,” Divine said. “That ice also created buffers against really terrible winter storms. Without sea ice along the shore lines, there’s no buffer, so we’re losing habitats for sea birds and mammals.”

The ice also created cold areas where red king crabs and snow crabs could settle without fear of predators. Without the sanctuaries, both of those species saw “devastating crashes” that have required disaster declarations, Divine noted.

“We’re seeing declines in species across the board, and the water level has gone up,” she said. “The erosion is eating away our roadways. We’ve lost our wild berry population, which has suffered from warm temperatures and lack of snow. We’re seeing a high burden on the communities looking for oil spills or invasive species. We’ve seen a lot more signs of change, let’s say, from increased use of the region.”

Divine argues the Unangax are best positioned to help take those strides toward sustainability and save the islands’ ecosystem in the process. She said implementing the proposed sanctuary is just the start.

“It’s quite diverse in its future opportunity for what we would seek to do under the broad PRIME initiative. We’re really interested in strengthening the research, the monitoring, and pushing education,” Divine said. “We have these vibrant communities that have really been affected by climate change, by fisheries, by these activities in the Bering Sea. what we’re hoping for is for ways to come together in a formal way and collaborate with a lot of different stakeholders to discuss economic interests and formulate solutions for that ecosystem.”