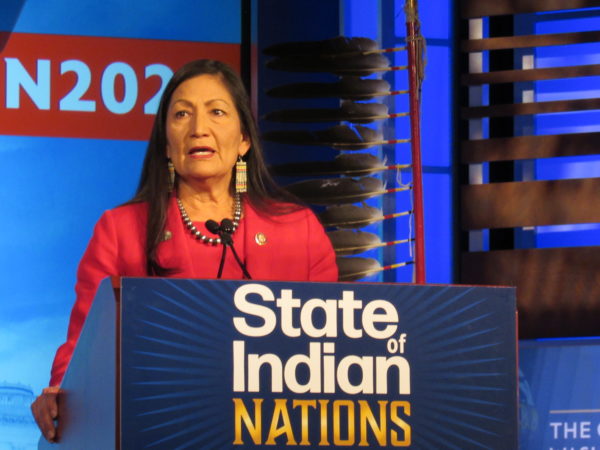 ALBUQUERQUE, N.M. — Even though the American Indian Alaska Native Tourism Association (AIANTA) annual conference had to go virtual due to the COVID-19 pandemic, Indian Country’s premier national travel association has named an all-star lineup of Native women to address those attending the conference from afar.

The American Indian Tourism Conference (AITC) is scheduled for Sept. 14-18, 2020. With the theme “One Country, Many Nations,” the conference will be conducted on a fully virtual platform for the first time in its 22-year history.

“As the nation works to overcome the challenges of COVID-19, the discussion about what role tourism will play in economic recovery is especially important to Indigenous communities across the country,” Sherry L. Rupert, AIANTA CEO, said. “Leading that discussion is an impressive lineup of keynote speakers, which includes some of the top Native American women leaders in the country.”

U.S. Rep. Deb Haaland (D-NM), a member of the Laguna Pueblo and one of the first Native American women elected to serve in Congress, will discuss how the Native American Tourism Improving Visitor Experience (NATIVE) Act has the potential to grow jobs in Indian Country. Congresswoman Haaland will also discuss the potential of tourism to help perpetuate cultural practices alongside the creation of jobs as visitors are drawn to the unique, authentic experiences that can only be experienced within American Indian Nations, Alaska Native Villages and Native Hawaiian communities.

A citizen of the White Earth Nation of Ojibwe, Peggy Flanagan is Minnesota’s 50th lieutenant governor and the highest-ranking Native woman elected to executive office in the United States. The lieutenant governor—whose career is built on standing up for children, working families, communities of color and Indigenous communities, and Minnesotans who have historically been underserved and underrepresented—will address tourism crisis planning and how tourism entities should plan for the best but prepare for the worst.

Fawn R. Sharp (Quinault Indian Nation) is the 23rd president of the National Congress of American Indians (NCAI), the oldest, largest and most representative American Indian and Alaska Native tribal government organization in the country. She is only the third woman to hold the position of NCAI president. Additionally, Sharp is the President of the Quinault Indian Nation in Taholah, Wash. Sharp will address conference delegates about the importance of relying upon and maximizing tribal and regional alliances, especially in times of crisis.

The lead cultural trainer of the Native Hawaiian Hospitality Association, Hiʻilani Shibata has been sharing the essence of ALOHA with those who work in the visitor industry of Hawaiʻi for more than 20 years. As one of the AIANTA Pacific Region board members, she works to encourage people in the Pacific Region to uplift their culture through authentic sharing with visitors, as the travel industry is a vehicle to peace around the world. Shibata will encapsulate those principles with conference delegates during the closing keynote, “The Meaning of Aloha.”

Leading the conversation on tourism recovery throughout the entire American Indian Tourism Conference is AIANTA CEO Sherry L. Rupert (Paiute/Washoe), who has nearly two decades of executive-level experience managing and promoting Native American tourism. She joined AIANTA as CEO in 2019, but previously served as the association’s President of the Board of Directors since 2010. During that time, she was instrumental in working with Congress to pass the Native American Tourism and Improving Visitor Experience (NATIVE Act).

Prior to joining AIANTA full-time, Rupert served as the Executive Director of the State of Nevada Indian Commission, where she reported directly to the governor of Nevada to serve as a liaison to the state’s 27 tribes, bands and colonies. During her tenure, she chaired Nevada’s Indian Territory, a marketing arm of the Nevada Commission on Tourism. She also secured funding and spearheaded the transformation of the former Stewart Indian School into a museum and cultural center. She also produced the annual Nevada Tribal Tourism Conference for more than a decade. Upon her retirement from the state, Nevada Gov. Steve Sisolak proclaimed May 10, 2019 as A Day in Honor of Sherry Rupert and dedicated a building at the school in her name.

“This is such an important time for indigenous communities to come together and share their collective knowledge,” said Emerson Vallo (Pueblo of Acoma), AIANTA Board President. “We have an all-star lineup of strong Native women speakers planned for the conference, including our own AIANTA CEO, Sherry L. Rupert, and we are thrilled that so many industry experts have agreed to share their expertise with conference delegates.”

In addition to daily keynote speeches, AITC will welcome nearly 50 hospitality industry speakers who will share their insights in nearly 30 educational sessions on topics ranging from general tourism marketing to crisis recovery and management.

Breakout session speakers include such industry leaders as Johnpaul Jones, acclaimed visionary behind numerous tribal museums and cultural centers, including the Smithsonian’s National Museum of the American Indian on the Mall in Washington, D.C.; Jeannie Hovland, Commissioner, Administration of Native Americans; Janie Simms Hipp, CEO of the Native American Agriculture Fund; and Chef Crystal Wahpepah, the first Indigenous chef to be featured on the Food Network’s Chopped TV show.

Conference registration fees begin at $400 for AIANTA members. A select number of exhibitor spaces are available starting from $800 per booth. The conference will also feature networking opportunities for Native artisans who are encouraged to secure a space for $200.