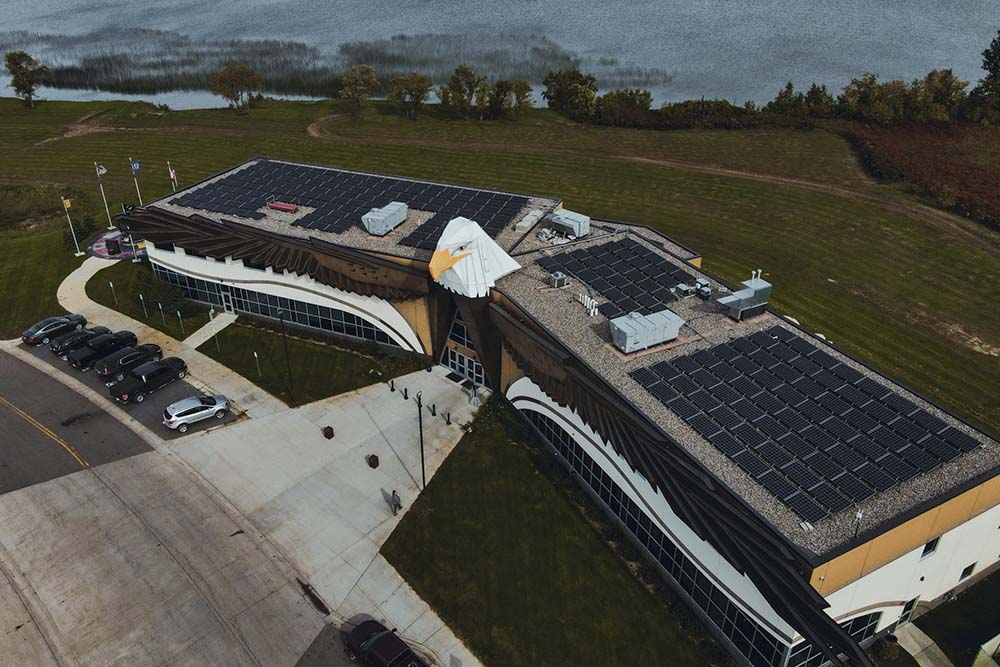 The Red Lake Band of Chippewa Indians in northern Minnesota has a vision to eventually incorporate solar and microgrids as part of a tribal-run utility.

The Red Lake Nation is betting big on solar energy.

The Chippewa Indian reservation in northern Minnesota will soon be home to one of the region’s largest solar arrays, a 240-kilowatt installation atop a workforce training center that will generate about half the building’s electricity needs.

The real power, though, could be in the emerging model to use solar, microgrids, and a tribal-run utility as a path to energy sovereignty.

“We have to prove that we can do this and we have to do this not only for ourselves but for other tribal nations,” said Red Lake member Bob Blake, the founder and owner of Solar Bear installation company.

The workforce training center solar array is the second of 12 solar projects planned for the reservation. The first sits not far away atop the Red Lake Government Center, a building distinguished by incorporating a two-story face of an eagle with wings spread across the facade.

The projects are the first two solar installations in Minnesota to be financed through crowdfunding, in which dozens of small investors lend to businesses to support entrepreneurs and their products.

The tribe has a separate initiative to construct a utility-scale 13-megawatt solar farm in partnership with Allete, one of the region’s primary electricity providers. 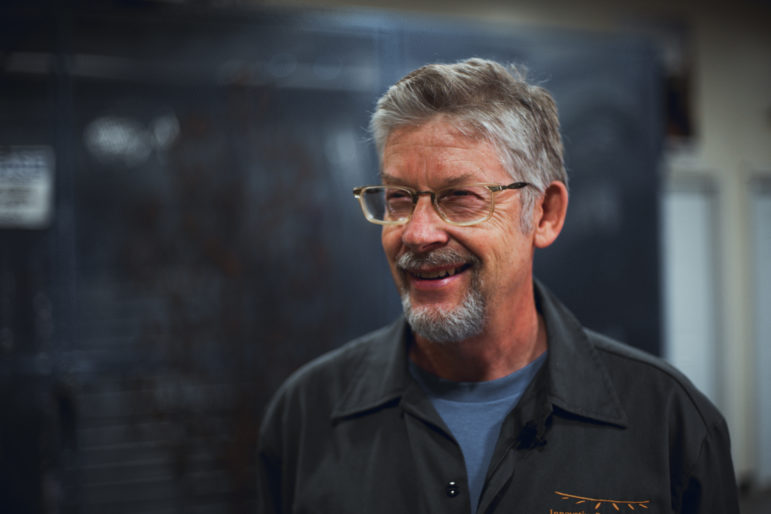 Ralph Jacobson, founder and chief equity officer of Impact Power Solutions (IPS) in the Twin Cities, developed the Red Lake Nation crowdfunding approach. Still, even he’s not confident it will continue to pay for all tribal projects even as new potential lenders seem willing to hear his pitch.

The dream of establishing a tribal utility in Minnesota will take years, requiring regulatory approval and careful negotiations with the tribe’s incumbent utility, a small cooperative. But Blake figures good things always take time. This will eventually pay off in energy self-sufficiency, higher-paying jobs and a healthier psychological and physical environment.

Located in northwest Minnesota 160 miles from the Canadian border, Red Lake Reservation sprawls over 1,259 square miles and is home to about half of the tribe’s 14,000 members. According to a 2015 report by the Bureau of Indian Affairs, 90% of Red Lake’s members qualified as low income — 65% lived on less than $12,000 a year — and half of the tribe’s working-age population was unemployed.

Red Lake retained sovereignty over its original land and links that status to its pursuit of energy sovereignty. Tribal Council Chair Darrell Seki has said he sees a future where members receive free energy and the danger of being disconnected no longer exists. Blake believes the solar program will create jobs with livable wages and educate a workforce capable of succeeding in a growing industry. 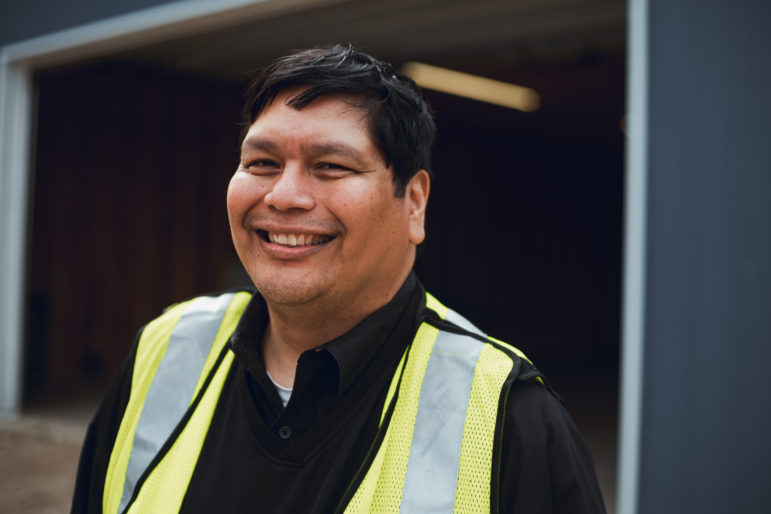 Robert Blake (Photo courtesy of Clean Energy Economy Minnesota)The tribe’s casino has been a significant economic driver. But tribal leaders four years ago tapped Jacobson to conduct a solar feasibility study to reduce Red Lake’s energy bill and create jobs. He developed a plan to spread 4 megawatts of panels over several tribal-owned buildings. He established a vision statement calling on the solar initiative to “vault the Red Lake Nation into the forefront of the movement to modernize the national power grid” through energy storage, microgrids and information technology.

Jacobson, 68, is one of Minnesota’s solar pioneers. He started his solar installation company in 1991 and barely made a living at it in the beginning. As the state’s solar economy has boomed over the past several years, Impact Power Solutions blossomed through commercial and community solar garden projects, leading to recognition as one of Minnesota’s fastest-growing companies. In his career’s twilight, Jacobson’s role as the company’s chief innovation officer allows him the freedom to nurture a new generation of minority entrepreneurs and target clean energy projects in Indian Country.

In working with the Red Lake Nation, Jacobson discovered nonprofit organizations trying to finance solar usually turn to outside investors because they cannot use tax credits generated by projects. They work to attract outside investors who help pay for the project in return for the tax credits and accelerated depreciation of panels.

When corporate money failed to materialize for the government center project, Jacobson recalled what he had learned at a conference in St. Paul about crowdfunding. The word describes a process common to many entrepreneurs who reach out to family and friends to invest in their startups, with the promise of someday receiving interest on their loans or at least payback on their principal. Crowdfunding web platforms offer venues for people worldwide to fund the creations of artists and entrepreneurs, but Jacobson preferred reaching out personally to friends and family capable of lending small amounts of capital.

He had more than 50 conversations, meeting with people, mainly fellow Quakers, who lent at least $1,000, driven in part by the desire to help a struggling reservation. Based on those discussions, Jacobson raised $115,000 and added $15,000 of his own money.

“In order to pull all the little pieces of capital from unsophisticated investors in the community who want to see some cool things happen — and when nobody has a lot of money, but everybody’s got a little — you got to be the community organizer,” he said. 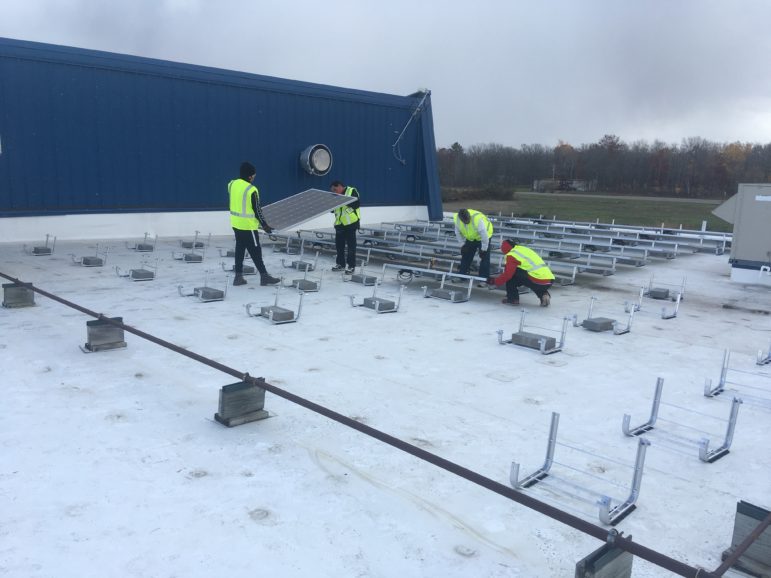 Installers at work on this month on a solar project atop the Red Lake workforce center. (Photo courtesy of Robert Blake)

No other Minnesota solar project has ever used crowdfunding, said David Shaffer, executive director of Minnesota Solar Energy Industries Association. He believes solar micro-lenders investing in Native American initiatives worry less about earning interest and more about their impact. “You might see the benefit here if what you’re trying to do is help out with and make good on some of the past challenges that Indian people face in this country,” Shaffer said.

Before the first project, Jacobson met Blake and they both agreed Red Lake Nation could use the solar investments to hire local workers and train future ones. Blake hired tribal members with construction skills to work on the first project and heard later that several sought more solar energy training to expand their skills.

“Workers came to me and said, ‘Bob, this makes me feel good because we’re doing it for the community, but it also has a purpose that goes along with native values and protecting the environment and the earth,’” he said. “I’m so proud of them because it showed me that this could be a kind of an entryway into other things for them.”

Jacobson has found financing the second project as challenging as the first. Five fruitless meetings with banks led him back to crowdfunding. This time Jacobson used MnVest, a nonprofit allowing companies to raise to $10,000 from individual private investors. Created by the Legislature and managed by the Department of Commerce, MnVest gives startups a secure web-based platform for collecting money from individuals, family members, friends, and others.

Minnesota Interfaith Power & Light helped introduce Jacobson and his pitch to churchgoers and faith groups interested in supporting solar that benefits low-income communities. Jacobson raised $250,000 from religiously inclined microlenders and plans to add $50,000 of his own money to finish the project. Solar projects depreciate over six years, a point at which their owners often sell or donate them. Jacobson plans to transfer to the tribe ownership of the projects for low prices after they fully depreciate.

The workforce center solar system will annually generate about half the building’s electricity needs, he said. After hearing that the local utility had no interest in buying excess electricity, Jacobson added large scale storage and microgrids for the workforce center and other Red Lake projects. “Probably anywhere from half to two-thirds of that power that comes in the middle of the day would have to be curtailed if we didn’t store it,” he said. 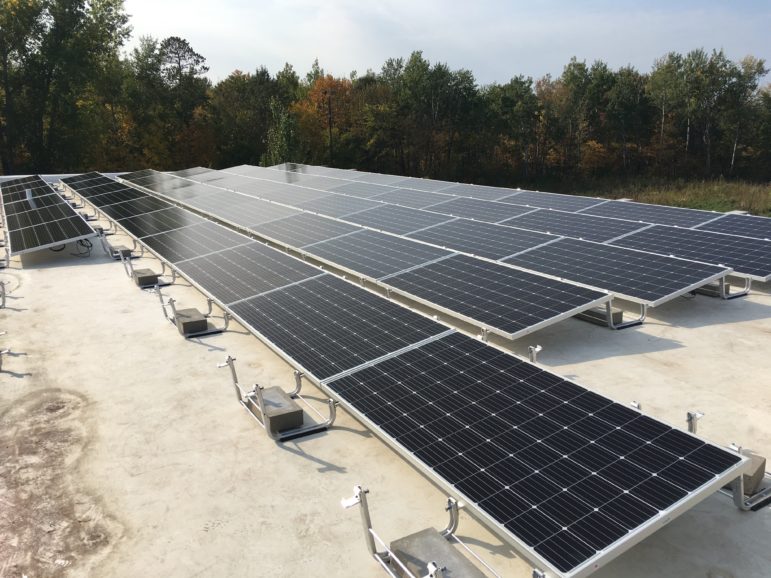 After the workforce center project is finished, Jacobson hopes to have raised enough money to continue installation throughout next year on two of the four schools slated to receive solar installations. Who the lenders are for those projects remains unclear. However, he hopes to tap the religious community again and entertain offers from other tribes interested in lending cash for clean energy. Some tribal members receive payments from fossil fuel companies who do business on their land and want to use part of the proceeds to reduce carbon.

Corporations have also reached out to learn more about supporting the tribe’s solar program. “More resources are starting to percolate because this will be a model for other tribes,” Jacobson said.

The company established “great rapport” with the tribe and learned its interest in clean energy and economic development opportunities, said Al Rudeck, Jr., Allete Clean Energy’s president. The two parties formed a partnership to build and market the solar farm, with an anticipated start date next year. “We have some interesting prospects on our list,” Rudeck said. “We’re pretty excited about it. It’s really a chance to help the band with some of their longer-term goals.”

As Jacobson works behind the scenes on financing, Blake, of Solar Bear, has become the spokesperson for the Red Lake Nation’s solar enterprise. A Red Lake tribal member, he lives in St. Paul, where he has nurtured a career in various fields ranging from entertainment to energy. Blake traveled with the pop star Prince as a security detail member and later worked for a financial firm before being let go during the 2008 recession.

A handful of jobs followed as he sought a new career. Van Jones’s book “The Green Collar Economy” led him to pursue a new career in clean energy that began with a brief stint selling solar garden subscriptions before joining Interfaith Power & Light as an organizer of its “Just Solar” program. During his time at the interfaith group, Blake, 45, kept hearing about the lack of non-white representation in the solar industry, which led him to do something about it.

Three years ago, he founded Solar Bear and began hiring Native Americans to work in the industry. This year Blake created another nonprofit to educate and train people for jobs in renewable energy. He found his calling as an advocate for the environment and as a job creator who opens doors to clean energy opportunities for tribal members.

A gregarious personality, Blake has become an in-demand speaker as other tribes seek to learn about his effort to build a native workforce in a growing field. He continues educating himself while pursuing advanced degrees in policy and economics at the University of Minnesota.

At Red Lake, he wants to direct his energy to produce job opportunities and work with Red Lake on energy independence projects. A future where tribes own their power generation and no longer rely on “the colonial capitalism” of extractive industries remains his goal. “I’m fortunate to be along for the ride,” he said, “and I want to be a service to my community to help them in any way I can.”

This story was originally published by the nonprofit Energy News Network and is republished with permission.