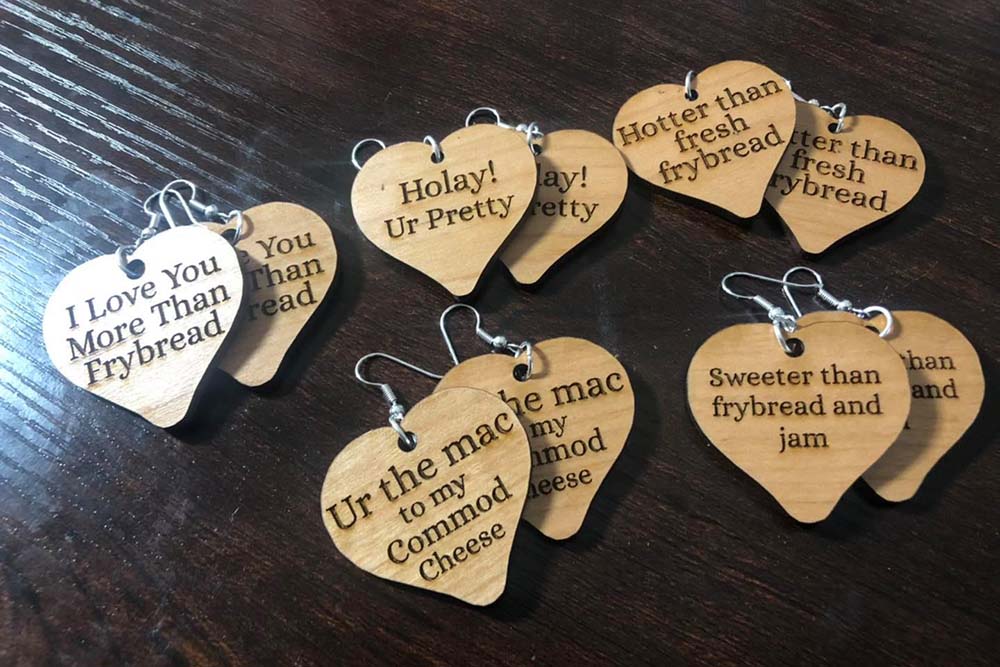 YAKAMA INDIAN RESERVATION, Wash. — In the pandemic-era marketplace, only the strongest businesses and products survive.

To keep his Native Anthro brand alive and thriving, Yakama artist, archaeologist and entrepreneur John Olney Shellenberger is constantly evolving by taking cues from the market, making smart investments, and keeping his heart, sense of humor and ears open.

“I’m just trying to keep it simple,” Shellenberger said. “Before COVID, I had a million products — it was like way too much. It was like Kmart.”

Even with a slimmed-down selection, Native Anthro still offers a varied and culture-filled collection of both practical and purely fun items like blankets, diaper bags and totes decorated with the founder’s original artwork, handmade leather bags and wallets, and T-shirts and accessories packed with Indigenous inside jokes and ’80s pop culture references. 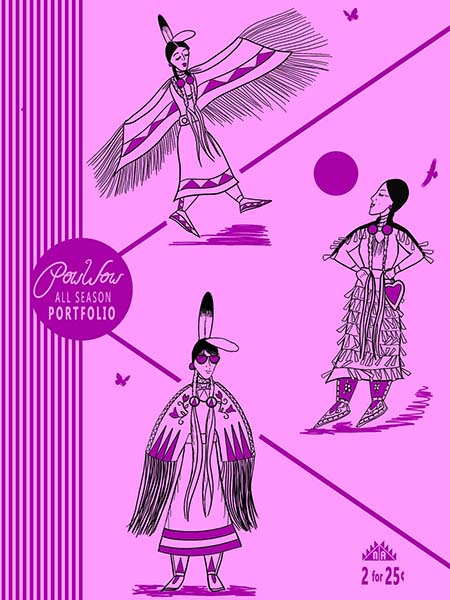 Yakama archaeologist, artist and entrepreneur Jon Olney Shellenberger of Native Anthro put an Indigenous twist on the retro PeeChee folder. Native Anthro, which Shellenberger launched in 2017, isn’t just a cute Anthropologie-like label meant to evoke a sense of faux-depth and intellect. Shellenberger is the genuine article. The lifelong artist from a line of beaders, moccasin-makers and leather workers works full time as Yakama Nation’s lead archaeologist and ethnographer, in addition to running every aspect of the Native Anthro business, including design and social media.

His vast knowledge of the land and history permeates his products, as does his Gen-X sensibility. His new retro T-shirts transform the iconic Pee-Chee school folders into Pow-Wow portfolios, replacing the generic All American kids with Native American kids.

“The Pee-Chee shirt is so unique. I went to school in the ’80s in the Pee-Chee era so that’s what drew me to it,” said Blackfeet and Suquamish customer Wendy Karen Boure, a powwow dancer who owns a range of Shellenberger’s products, including a lunch bag she uses daily.

“I love everything that comes from Native Anthro,” Boure said. “A couple of years ago, I purchased a beautiful lady traditional dancer hoodie and since then I’ve been a huge fan.”

The retro folder shirts may be poised to become the brand’s next big thing, joining the list of popular items that are propelling Native Anthro through the pandemic.

Tribal Business News talked with Shellenberger about the products that have risen to the top during the last year, and the inspirations and stories behind them.

When Shellenberger’s overseas manufacturers shut down at the start of the pandemic, Shellenberger’s wife, Native Anthro’s co-creative director, swooped in to save the business.

“I was in a world of hurt last year because I couldn’t sell the products I relied so heavily on,” Shellenberger said.

A simple suggestion from his spouse to order affordable 8x10 prints of his original artwork put an end to the panic.

“That saved me, that saved my business, just selling $10-$20 art prints,” he said, noting that items in that price range “are what people are buying right now.”

Shellenberger’s Native Cinderella, which he depicts in a serene natural setting with magpies and bluejays attending to her braids and fringed shawl, has emerged as the top-selling print and is currently Native Anthro’s biggest selling item overall.

Native Cinderella is part of his Living Room Legends series, which is inspired by his three children, and she also appears on diaper bags and blankets. Creating his original artwork digitally allows Shellenberger to easily repurpose the images for a variety of items, he said.

“It’s related to oral history about the ice ages here. We had huge floods in the Pacific Northwest and there are certain mountains that we went to for refuge, and one of the mountains is in the background,” he said. “I also blend in significant animals. Instead of having the mice, I have a grey squirrel and a chipmunk. For the birds that help put her dress on, I have a magpie and a bluejay, both of which have ties to the ice age.” 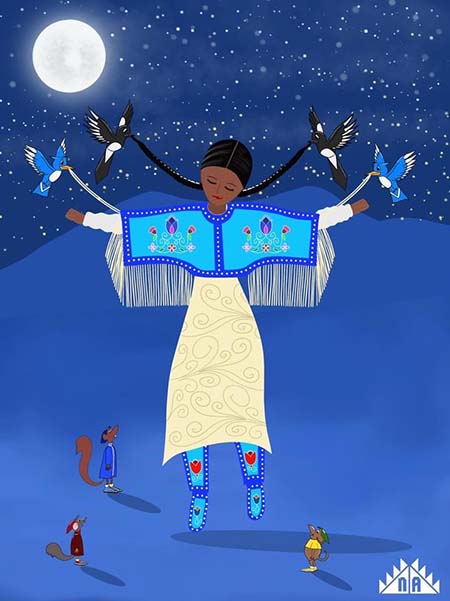 Yakama archaeologist, artist and entrepreneur Jon Olney Shellenberger's Native Cinderella art prints are a best-selling item for his brand Native Anthro. This year, Shellenberger felt moved to make some Valentine’s Day merch, and listening to his heart paid off.

“I’ve never really been into Valentine’s Day. I’ve always kind of ignored it as a holiday,” he said. “But this year, I felt like I wanted to bring some happiness to people and try to make them laugh, at least.”

Shellenberger worked humor into heart-shaped $20 earrings with flirty, uniquely Indigenous lines, including “I love you more than Frybread.”

“Those are inspired by the sweethearts that we eat all the time,” said Shellenberger, who initially contemplated customizing candy hearts with his original Native Valentine’s Day messages.

He quickly learned customizing the sweets for resale was cost-prohibitive, and devised a way to use the resources he already had and the buying patterns he’d observed to bring the love and laughs to his customers.

“I decided to make my own hearts and put them into earrings, because earrings have been a really good seller for me this past year,” he said. “I didn’t really get into earrings before this, but I needed $20 items that people would want to buy, and earrings are one of them.”

Shellenberger used one of his largest investments, a $6,000 Glowforge 3-D laser printer he purchased last September, to create the earrings and keychains.

“I can draw my designs on my iPad or computer, or use a photo, and scan them in the Glowforge and it’ll print it out on wood or acrylic, and pretty much anything except hard metals,” he said. “I had my eyes on that printer for a long time. It was something I had to work up to for a couple of years. It changed my business. I reinvest and put a lot back into my business.”

Sometimes it’s worth waiting for an original idea to catch on. Shellenberger’s “Commod Collection” T-shirts featuring retro 1980s-era labels of the government-issued food he grew up eating on the Yakama Indian Reservation are an example of a sleeper hit product.

“I’ve been creating these commodity label shirts for two years, and people liked them, but they have recently blown up, and I think that might have to do with what’s going on — the loss and the grieving,” Shellenberger said. “I think the shirts get to a part of our youth and what we feel comfortable with at a time when we’re very uncomfortable.

“Most of the people who follow me are 40 or older, so they get it. The things that your grandma and your mom could make with commodity food was the magic. They took total junk ingredients and made the house smell awesome.”

“There was no bacon and there was no coffee. If there were, they would have sucked,” he joked.

T-shirts are one of Native Anthro’s steadiest and most reliable sellers, partly because Shellenberger mostly uses on-demand drop shipping services that allow him to sell the shirts individually rather than ordering a whole series of them.

“It’s very low risk. I don’t think you can really beat having that done,” he said. “I also do runs of screen prints, but there’s always that risk that nobody will like them.”