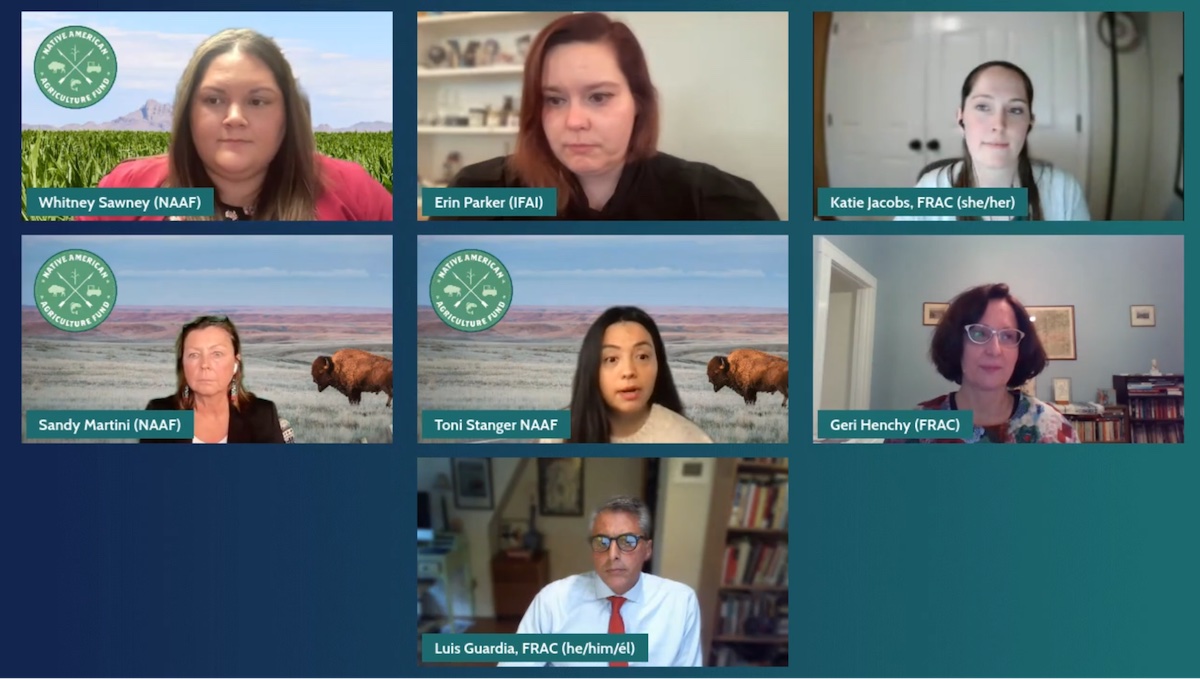 An inter-organizational survey of Indigenous communities has revealed that nearly half of respondents suffered food insecurity during the COVID-19 pandemic.

The Native American Agriculture Fund, the Food Research and Action Center, and the Indigenous Food and Agriculture Initiative at the University of Arkansas joined together last week to release a wide-ranging report on food issues tribes faced during COVID’s first waves.

The 71-page report, titled “Reimagining Hunger Responses in Times of Crisis: Insights from Case Examples and A Survey of Native Communities’ Food Access During COVID-19,” surveyed 504 respondents across 34 states beginning in February 2021.

More than two-thirds of the respondents lived on a tribal reservation and averaged 3.8 members per household, with $30,000 to $50,000 in median household income.

Food Research and Action Center President Luis Guardia said during a presentation on the report that the gathered data could better inform tribes, policymakers and advocates of the dire need in Indian Country prompted by COVID-19.

“You need good data for good policy,” Guardia said. “For far too long, Native communities have not been properly counted, Native members have been combined with other people and called ‘other,’ essentially rendering people invisible. You can’t make good policy with that.”

For example, Native communities received delayed or interrupted food assistance because tribal governments were not considered eligible administrators of some commodity and child nutrition programs. The report specifically pointed to The Emergency Food Assistance Program, or TEFAP, as a program tribal governments should be eligible to administer.

Even the Food Distribution Program on Indian Reservations program, which provides USDA foods to income-eligible Native families, was affected. The report notes that FDPIR suffered supply chain disruptions and infrastructure issues, such as interrupted food deliveries, which it attributed to inadequate resources.

FDPIR received less COVID-19 funding ($50 million) in comparison to other federal nutrition initiatives like the Supplemental Nutrition Assistance Program, which received more than $29 billion in additional funding through April 2021.

That did not stop tribal citizens from turning to their governments directly for assistance with growing food needs, according to the report.

While SNAP helped — usage of the benefits rose from 14 percent to 20 percent among respondents — FDPIR saw an even bigger increase in usage, jumping from 11 percent to 34 percent of respondents. Notably, SNAP requires beneficiaries to travel to grocery stores to make purchases with state-issued EBT cards, which presented a problem for Native people who lack access to grocery stores and for COVID-vulnerable elders, according to the report.

“Tribal governments and Native-led agricultural initiatives play an important role in providing their citizens with access to food, especially in times of extreme crisis,” said NAAF CEO Toni Stanger-McLaughlin. “Indian Country persisted in doing what they have been doing for centuries, forging a resilient and robust response to systematically created hardships.”

The swap in benefits usage presented an interesting data point because of regulations regarding SNAP and FDPIR, according to Indigenous Food and Agriculture Initiative Director Erin Parker. Regulations prevent someone from using both programs in the same month, which means families have to choose which benefits they’ll receive.

Parker said that increased FDPIR usage, alongside increased reliance on tribal governments to distribute food and “step up” in the face of an anemic federal response, showed that tribal citizens ultimately trusted their own communities to help them.

“The reliance on FDPIR, which is tribally operated, went up,” Parker said. “What that indicates to me is it says the same things that a lot of Indian Country already know: In times of crisis, tribal citizens go to their governments.

“That’s not a revolutionary idea, it’s always been true, but I think it’s important for policymakers to see that respect for sovereignty reflected in this data.”

For example, the report advocates for a 20 percent USDA set-aside established for tribal organizations, governments, Native-led nonprofits and Native producers in each of USDA’s program authorities, as well as mandatory data collection on American Indian and Alaskan Native peoples in government surveys on food security.

The report also pushes for an expansion of tribal participation in USDA markets, creating more pathways for Native-grown foods to be included in nutrition programs. That could insulate programs like FDPIR from further supply disruptions down the road as COVID variants continue to spread, as well as address long-standing health issues brought on by chronically poor diets, according to the report.

While some of those changes require statutory action, the USDA could immediately effect change by partnering its Agricultural Marketing Service with ag organizations such as the Intertribal Agriculture Council for technical assistance, training, and vendor certification, the report’s authors said.

Another set of recommendations would give tribal governments broader authority in administering federal nutrition programs by way of less bureaucracy and more direct oversight.

“Congress should give full authority to Tribal governments to function as government agencies in administering the federal nutrition programs,” according to the report. “This is critically important for recognizing Tribal sovereignty and would ease the administrative burden on tribes, like the Navajo Nation, that straddle multiple states and must coordinate with multiple state agencies to provide school meals.”

Moreover, the report notes that tribes should be treated as separate governments working through a direct federal-to-tribe relationship rather than wrestling with state agencies for access to resources.

Ultimately, the increase in food insecurity during the pandemic boils down to a slow federal response brought on by insufficient data and long-standing issues with federal nutrition programs, all of which can be addressed by better policy.

“I think what we’re hearing a lot here is some excitement to have the insight and some of the information in this report have legs … to go beyond the immediate circle of folks who are interested,” Guardia said. “We need this information to be shared with advocates. We need this to be available and known as we have these conversations with policymakers.”