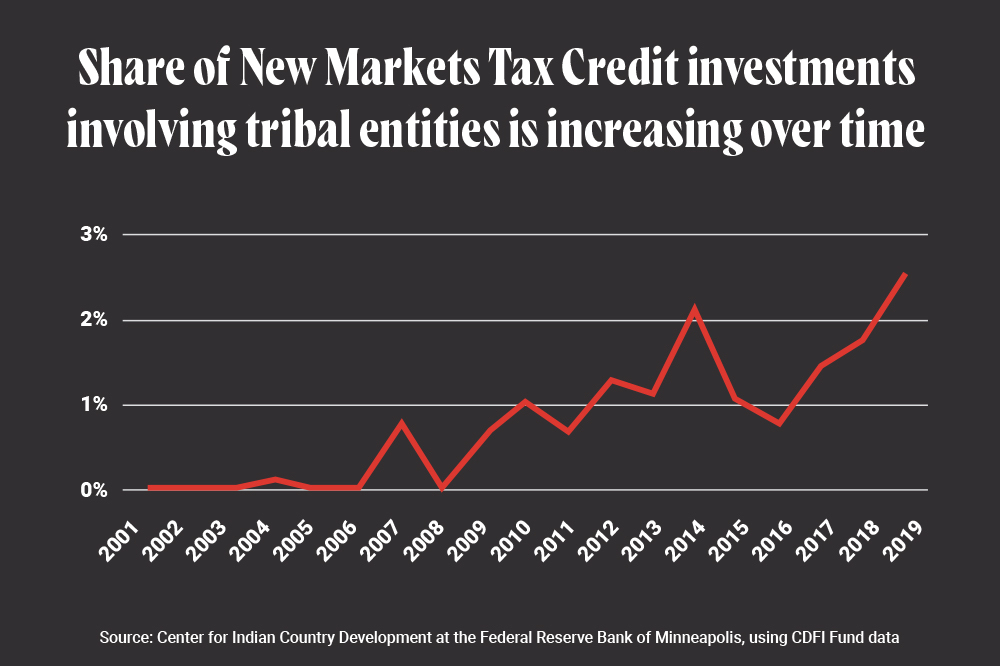 Add the New Markets Tax Credit to the lengthening list of federal programs not helping Indian Country as much as they should be.

According to a new study by the Federal Reserve Bank of Minneapolis, the New Markets Tax Credit (NMTC) program has been slow to gain traction in Indian Country, despite it being intended to boost economic development in distressed areas.

Although investment has started to quicken in recent years, the Federal Reserve Bank found just $598 million in tribal NMTC investments versus $61 billion in total as of 2019, an amount far lower than Native percentage of the national population.

“For every $100 in NMTC investments involving non-tribal entities, only $1 is being directed for investments with tribal entities—even though a disproportionately high share of census tracts eligible for NMTC investment are located in tribal areas,” according to the report, which was written by Senior Economist Matthew Gregg, Project Director Michou Kokodoko and Senior Research Assistant Elijah Moreno.

That percentage has risen in recent years, up from a dismal 0.3 percent in the first decade of the program. In 2019, Native share of NMTC investments grew to 2.55 percent of the total.

In addition, tribal entities that receive NMTC funding tend to be highly concentrated, the Fed found, with just 10 tribes receiving half the funding of all 347 tribes in the lower 48, and only 36 of those 347 tribes getting any benefit. Equity is highly focused on just four community development entities (CDEs), the report said.

“We find that while the share of NMTC investments involving tribal entities is increasing, the total number of tribes involved remains small, and the number of financial intermediaries directing NMTC investments to tribal entities is even smaller. These realities indicate that the program is not reaching Indian Country in an equitable way,” the authors wrote in the report.

The Minneapolis Fed runs the Center for Indian Country Development, a research center and resources clearinghouse for Native economic development.

The New Markets Tax Credit is operated by the Treasury Department’s CDFI Fund, which also oversees community development financial institutions (CDFIs), and the Internal Revenue Service. The program is somewhat complementary to the Low Income Housing Tax Credit on the economic development side (rather than housing), although some NMTCs do benefit housing and a good many projects use both programs. How that’s done is by splitting mixed-use developments into two legal entities, one a commercial condominium, funded by NMTC and often on the first floor, and another which funds a residential condominium on upper floors through LIHTC.

The NMTC adds a level of bureaucratic complexity to the CDFI Fund, which has seen dozens of Native CDFIs spring up over the last dozen or so years. Those groups have to qualify for a CDFI designation to get access to federal CDFI grant money. A Native CDFI must pursue an additional designation, the community development entity, or CDE, to tap into the NMTC program.

Once a CDE qualifies for tax credits, it must find investors to buy equity in its projects, similar to the way LIHTC equity is sold to investors to fund housing.

“Only a small number of  tribes, such as the Winnebago Tribe, Navajo Nation, and Laguna Pueblo Tribe, have received NMTC investments for multiple projects,” according to the Minneapolis Fed report.

Indian Country’s lack of participation in the NMTC program has led groups like the Native CDFI Network and members of Congress to float the idea of creating a Native set-aside similar to the CDFI Fund’s Native American CDFI Assistance (NACA) Program.

Specifically, Native CDFI Network would like to find a way to have the set-aside dedicated for Native-led CDEs so that the economic activity stays within Indian Country.

“The thing that we would like to see with the New Markets Tax Credit with the proposed 10 percent set aside is that those funds really need to be designated through and allocated to Native-controlled organizations,” Pete Upton, interim executive director of the Native CDFI Network, told Tribal Business News.

Alaska Growth Capital is one of just two Native CDEs, the other being Chickasaw Community Development Endeavor LLC, according to the report. The Chickasaw CDE, based in Ada, Okla., has received two NMTC allocations, totaling $50 million in credits.

Other, non-Native CDEs, such as Kansas City, Mo.-based Travois LLC, also use credits to fund projects in Indian Country.

One example of Alaska Growth Capital’s Native investment is General Communication Inc. TERRA – Northwest Alaska. TERRA (Terrestrial for Every Rural Region) is GCI’s effort to build a communications network for the remote and rural areas of Alaska. The company is building a ringed network of underground cable and above-ground microwave towers to bring broadband internet to about 45,000 people in more than 80 communities in the state, according to Alaska Growth Capital.

Total investment was $31.1 million, of which $7.3 million came from NMTC equity. The project has created 190 jobs, according to Alaska Growth Capital.

Authors Gregg, Kokodoko and Moreno point to several successes in NMTC investment in Indian Country. They include a new wellness center on the San Carlos Apache Reservation, a youth center owned by the Coeur d’Alene Tribe, and a new tribal administrative building for the Fort Peck Tribes.

“However, the numbers clearly indicate there is room for far more participation by tribal entities,” the authors wrote in the report. “To inform recommendations for broadening participation, future Center for Indian Country Development work at the Federal Reserve Bank of Minneapolis will identify key barriers and highlight the strategies that successfully funneled NMTCs to the few tribes that have benefited from the program.”

The CDFI Fund has recently named a contractor, Seattle, Wash.-based Big Water Consulting LLC, as part of an effort to boost NMTC investment in Indian Country.