Belatedly, a housing program starts to work for California tribes

Since 1986, the Low Income Housing Tax Credit has helped finance more than 3 million new or rehabilitated homes in America. But despite plenty of low-income tribal members and a huge amount of housing need, Indian Country has missed out on a lot of the funding.

California — the state with the most tribes (109) in the Lower 48 and with 720,000 Native Americans — is a good example, allocating its first LIHTC credits to a tribe only in 2014, when a Native set-aside was launched.

The situation begs the question: Why did it take 28 years to get tribes into a program where outside investors buy equity in housing projects in a state that has the most American Indians or Alaska Natives in the country?

For one thing, California’s tribes tend to be small to very small: An analysis by California Courts, the judicial branch of California, says they range from a low of five tribal members to a high of 5,000. Their land bases tend to be small to tiny, since many of these tribes were “terminated” by the federal government in the 20th century and had no tribal land to speak of when they won re-recognition. Many of them are very rural, which makes construction more costly. Oftentimes, investors know little to nothing about tribes and have shied away from perceived risks, even though tribes often back housing projects with their own money.

On top of all this, the rules for allocating LIHTC credits as drawn up in California were prejudicial to allowing a tribal project to get enough points to qualify for an award, according to Indian housing advocates. It took many years of advocacy from nonprofit and for-profit LIHTC advocates to get the state of California to put in the set-aside.

David Bland, chairman of for-profit Travois Inc. of Kansas City, Mo., noted that his firm lobbied the California Tax Credit Allocation Committee for 13 years before the body agreed to the set-aside.

“Travois applied for nine different tribal clients prior to 2014 and were denied every time despite the huge need for housing on California Indian tribal lands,” he said. “Travois and our tribal partners lobbied TCAC for specific changes to the TCAC regulations to open access to tribes, including the request of a specific tribal set-aside. We were turned down every year and made no progress until 2012.”

Travois had been very successful in LIHTC applications in other states — Bland estimated that 75 percent of applications the company was involved with were approved — and is the for-profit leader in the field, having participated to date in 208 projects with 5,930 units and investor equity of $830 million raised.

Dewey Bandy, the former deputy director of the California Coalition for Rural Housing, noted that many groups mobilized to get the tribal set-aside. In an article for the San Francisco Federal Reserve, he wrote it was “the culmination of efforts by tribal housing agencies, Native American housing coalitions, rural affordable housing advocates and state and federal housing agencies.”

The coalition pointed out to the California Tax Credit Allocation Committee that the point process to determine LIHTC awards discriminated against Indian applications. 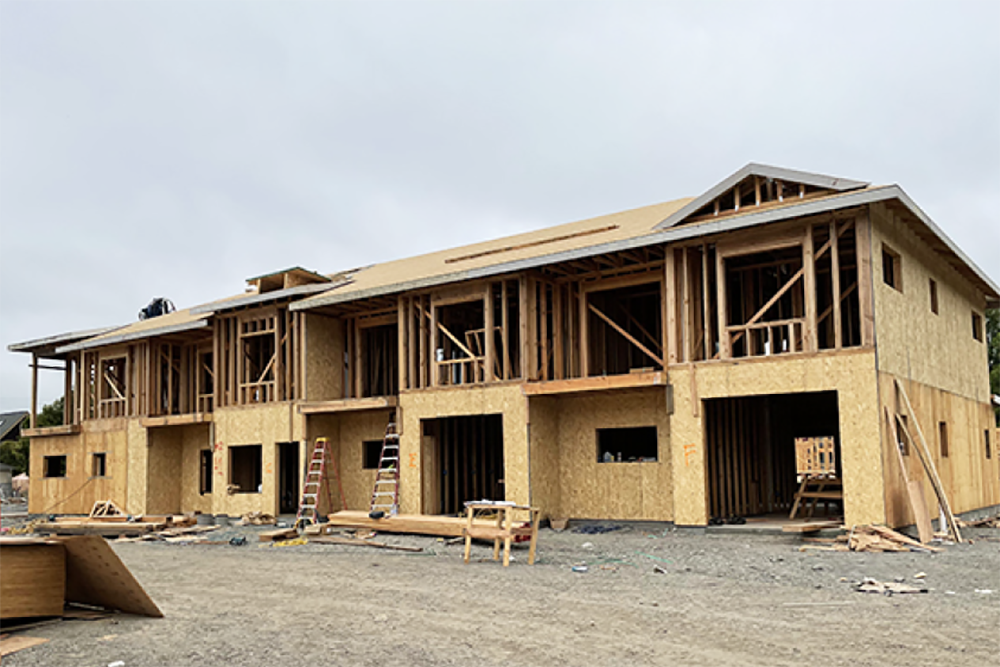 The Yurok Tribe, along with the Karuk Tribe, has received multiple tax credit allocations from the state of California since 2014. Here, Yurok Homes 3 is shown under construction. (Photo courtesy of Travois)

“To be awarded tax credits in California, almost all LIHTC applications must secure a significant number of competitive points awarded to projects that meet set smart growth criteria, such as close proximity to transit, full-service grocery stores, medical services, parks, libraries and schools,” he wrote. “Such scoring puts the vast majority of California tribes at disadvantage, as they are situated in rural locations where it is nearly impossible to meet the amenity proximities called for in the smart growth criteria. In the general LIHTC competitive pool in California, an inability to maximize site amenity points can be easily fatal to a project application.”

Getting the tribal set aside — it was made a portion of California’s annual rural LIHTC allocation — allowed projects to start getting approved, Bland said.

“Since the apportionment was enacted in the 2014 funding round, 12 tribal projects have been allocated credits,” Bland said. “These 12 projects account for 340 units of housing.”

The set-aside program started with a dud, as the original allocatee, the Bishop Paiute Tribe, later terminated the agreement, saying they had not understood all its terms. But the other dozen projects have been much more successful.

Travois has been involved with almost all of the successful projects. Typically, the company acts as consultant to the tribe, which acts as the developer, often through the housing authority or other designated housing entity. This allows the tribe to collect the developer’s fee allowed under LIHTC.

Travois also has an active architecture unit that designs houses to be built.

Capital markets “syndicators” Travois has worked with to produce investor equity include RBC Community Investments, The Richman Group, and Hunt Capital Partners. They have attracted $114 million in equity to support these California tribal projects and supported a total of $153 million in housing development, according to Travois.

Since most California tribes are small, they receive only small amounts of Indian Housing Block Grant money from the Department of Housing and Urban Development, while the big tribes get millions of dollars annually. In a report to Congress, HUD said the smallest grant in 2020 was for $74,594, and many of the California tribes are on the low end of the spectrum, making housing development unaffordable for them.

A LIHTC award allows them to leverage their federal housing dollars substantially.

For example, the North Fork Rancheria Indian Housing Authority of North Fork, Calif. raised $10.6 million from a 2020 tax credit allocation and plans to build 26 homes at its rancheria near the Sierra Nevada Mountains. (Rancheria is a word often used instead of reservation to describe Native homelands in the state). The tax credit equity comprises about two-thirds of the $16 million total development cost.

Travois partnered with the tribe for consulting and architectural services, while RBC Community Investments provided the equity.

Construction on the 19 structures, a mix of single-family homes and duplexes, is set to be finished next year on a mountainside plot of ground the tribe more than 20 years ago planned for an affordable housing development, demonstrating how housing projects can be a very lengthy process for tribes. North Fork has constructed 14 houses there over the past 20 years and has built a total of 33 homes on the rancheria, meaning this project will nearly double the total amount of housing the tribe has built to date.