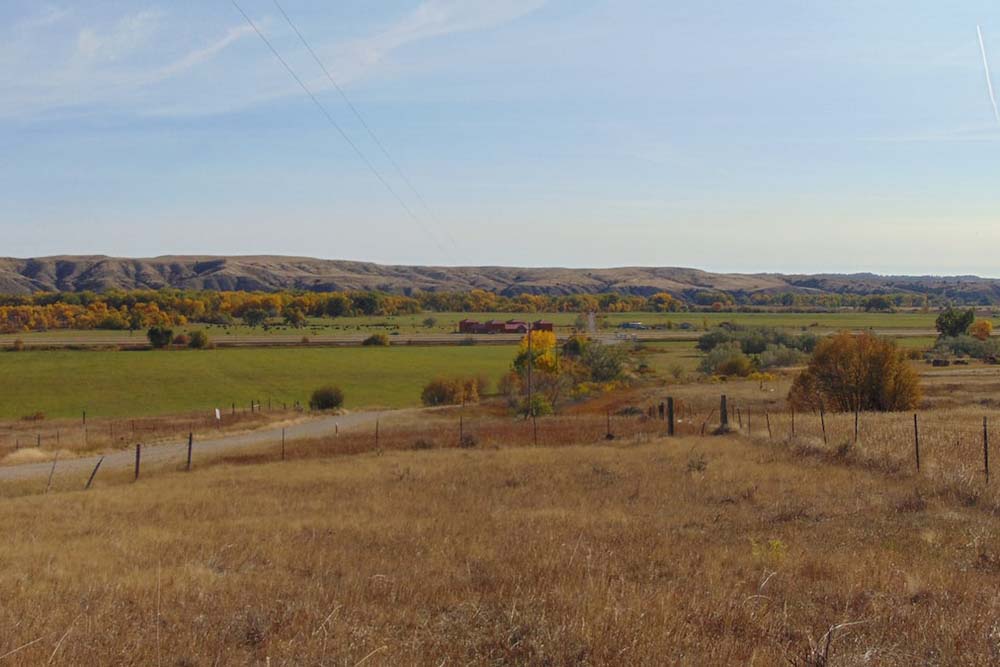 In February, she launched an Airbnb Online Experience entitled “Custer’s Last Stand: A Native Perspective.” It’s a virtual adaptation of the bus tours she’s been leading through the Little Bighorn Battlefield National Park near Crow Agency, Mont. and surrounding areas since 2014 with her business, Indian Battle Tours. 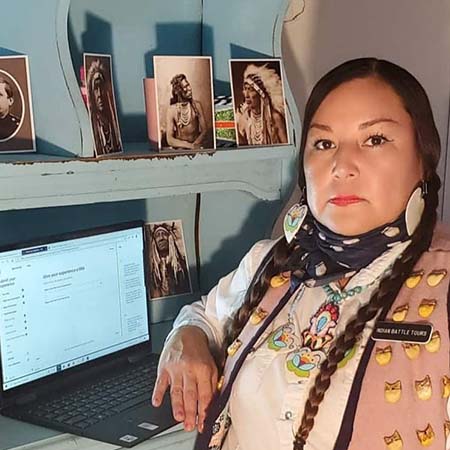 Crow entrepreneur Olivia Rose Williamson, owner of Indian Battle Tours, adapted her tours into the Airbnb Online Experience: Custer's Last Stand: A Native Perspective. (Courtesy photo)Virtual tourists who pay $5 for Williamson’s Airbnb Online Experience get an action-packed hour and a half presentation incorporating maps, site photos, images from history books of key figures like Northern Cheyenne warrior Wooden Leg, and above all, the force of Williamson’s charisma and palpable zeal for history.

“I’ve just been a person that always loved history,” said Williamson, who majored in Native American Studies at the University of Montana and worked her way up through the regional tourism industry before launching Indian Battle Tours. “I sure hope my guests learn something. I hope they reflect and think about how Native people got their land stolen from them. That’s what it really comes down to.”

As she recounts the battle and the events leading up to it, her fingers becomes popping guns, her expressive eyes widen, her arms sweep dramatically, and her guests can virtually see and hear the Lakota, Arapaho and Cheyenne warriors swarm over mountains taking Custer’s company by surprise.

“She’s very passionate, she’s a wonderful storyteller and she’s very excited about sharing the Native perspective,” said Talia Salem, principal of Urban Nomad, a Washington, D.C.-based boutique tourism consulting firm. “I love how animated she is and how she gesticulates. She’s just really fun.I also like how she brings in a lot of different visual media. She actually went out to the different battle sites and took pictures.

“Those are places most people don’t have access to online or in person, unless they’re on a tour. They’re getting this insider perspective either way.”

Salem is part of a team that trained Williamson and five other Indigenous entrepreneurs from Montana and North Dakota to create Airbnb Online Experiences last summer and fall, as Tribal Business News previously reported.

The training is a pilot program developed by Virginia Tech and George Washington University, and funded through the Native American Tourism and Improving Visitor Experience Act, which was passed in 2016 to bolster entrepreneurism and tourism in Indian Country.

Williams said if she hadn’t been approached to try the training, Indian Battle Tours would have become one of countless business casualties of COVID-19.

In an average April-September tourist season, Indian Battle Tours conducts around 40 bus tours. Williamson said the majority of those tours are chartered buses with up to 50 people, and the rest are private tours of 10-15 people.

But 2020 was a brutal year for tourism professionals, and near the beginning of the pandemic, Williamson was convinced she’d given her last tour.

“Last March I made the decision to totally shut down my tours. I only gave two tours the whole year and made $150,” Williamson said. “I was mainly worried about my mom because I live with her and she’s an elder and I didn’t want to put her at risk, so I totally shut my business down.”

The Airbnb Online Experience hasn’t allowed her to recoup her lost tourism revenue, but pivoting online has gained Williamson new fans and followers from as far away as Switzerland, Italy and Indonesia — people who are eager for authentic Indian Country encounters and to meet real Native Americans.

Williamson said she intends to continue offering her online experience when in-person tourism resumes for people who still don’t have the opportunity to visit or still aren’t comfortable traveling, and she’ll soon increase her experience price from $5 to $15.

Indian Battle Tours is Wiiliamson’s main income source, but the resourceful entrepreneur is a woman of many complementary talents and enterprises. As such, she leaned on her skills and experience to survive the lost tourist season of 2020.

“She’s a serial entrepreneur: She’s an incredible tour guide, she’s an artist, she does teepee rentals for Crow Fair. She’s just a really creative and capable individual and leader in her community and she’s made all of these separate endeavors work for her,” said Anna Barrera, who is program manager of the North Dakota tribal tourism development at George Washington University and part of the Airbnb Experience training team.

Barrera was so impressed with Williamson that she invited her to be a keynote speaker at the Women’s Entrepreneurial Leadership Impact Conference put on last month by the George Washington University School of Business.

“Native women are especially resourceful. They face a lot of challenges in their own communities and externally,” Barrera said. “There’s a lot of power and independence that comes with entrepreneurship and Rose is no exception.”

“In the winter time when I don’t have tours, I work part time for Charlene. Last year, she just kept me on and just had me do a bunch of stuff for her. That is what got me through last year,” Williamson said. “We do capacity building. I work on helping the Crows do business. I help them build their businesses, but they do most of it themselves. I just give them a business plan and a little guidance.”

Plenty Doors provided the bulk of Williamson’s income, while her creative side business, Lady Pompadour Beadwork and Design, also assisted in keeping her afloat.

“I didn’t do too many sales compared to 2019, but here and there I would make things and throw them on Facebook and people would buy them,” she said. “That paid for some of my groceries and bills.”

Williamson also runs Crow Camp Teepee Rentals, another enterprise put on pause by the pandemic. She mostly serves visitors during the annual Crow Fair in August, which was canceled.

The story of Crow Camp Teepee Rentals demonstrates Williamson’s ability to spin a potential crisis into a success, a trait that has helped make her such a powerful entrepreneur.

In 2015, an entrepreneur Williamson met at an American Indian business conference approached her to get in on an existing venture. The partner told her they were planning to bring a big crowd of Native visitors to Crow Fair for a large tour and asked if Williamson would be interested in putting up teepees to accommodate them. The person added that the visitors would also probably be up for taking one of her battle tours.

Williamson agreed to help out, and applied for and received a Montana Indian Equity Grant to purchase the teepees.

“I got the camp ready, and two weeks before Crow Fair, the people who asked me to put up the teepees backed out,” she said. “I put my teepees up anyway and that was the beginning of my teepee rental business.”

It turned out that Williamson only needed herself to make the business work. With guests coming from all across the United States, as well as visitors from France, Australia, New Zealand, Williamson has no problem with populating her teepees.

The rental business is such a hit that she’s able to share the wealth with other Crow entrepreneurs in the same line of work, including a friend who specializes in luxury camping, known as “glamping.”

“When all my teepees were selling out and I didn’t have any more space for customers, but customers kept calling, I filled up her teepees,” Williamson said.

While she waits to fill her teepees and resume in-person tours, Williamson is preparing for the re-emergence of in-person Indian Country tourism, albeit with caution.

She is brainstorming socially-distanced strategies to start delivering onsite tours again without putting her customers or her own loved ones at risk. One of her ideas sprang from an experimental virtual tour she conducted last year via smartphone. Williamson said she drove through the battlefield territory delivering her presentation, but the connection was bad in several areas and kept cutting out.

This time around, she wants to try using walkie talkies and having people follow her car around from their own vehicles.

“That’s the only way I can think of to do it in-person and still be safe,” she said. “I was thinking of doing the walkie-talkie thing this summer and then next summer probably return to my regular (bus and private) tours.”

Salem thinks Williamson could be onto something with her caravan concept.

“I could see that being a really great model to keep everyone safe,” Salem said. “It’s  definitely worth trying because, experience-wise, it’s not that different from a bus tour. I think it’s a great idea.”

For the re-emergence of Indian Country tourism in general, Williamson and tourism professionals think the sector needs to move slowly and carefully.

“We need to be really sensitive to how tribal communities want to shape tourism after the pandemic,” Barrera said. “I totally understand if there’s some hesitancy to reopen at the speed at which the surrounding communities are willing to reopen because of the outsized impacts of COVID on Native communities.”

Salem said there was very high demand for in-person Indian Country prior to the pandemic, and it’s likely to increase once restrictions are lifted and entrepreneurs like Williamson are free and confident to welcome guests.

“People are looking for these transformational authentic experiences, and with Native tourism, there’s really no comparison or duplication to the types of experiences that these communities can offer,” Barrera said. “They offer something that’s totally unique that I think people are really craving coming out of the pandemic.”