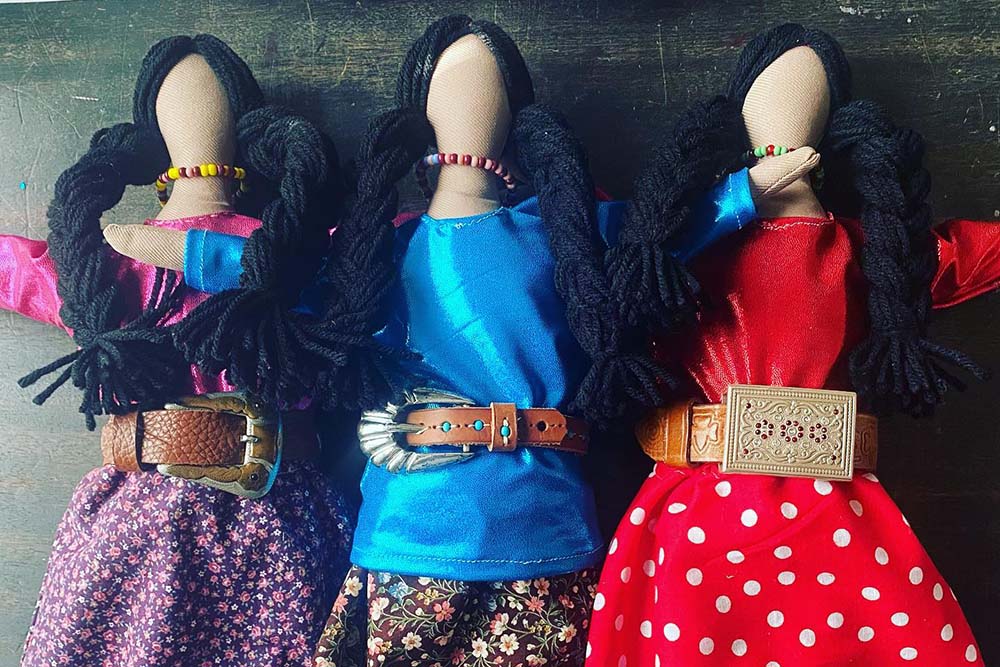 Then her Fierce Ones line of dolls began to catch on over the last six months, emerging as the face of Plains Soul.

Adorned with glass bead necklaces, and decked out in ribbon skirts, jeans, T-shirts, glass bead necklaces and more cool, contemporary Native attire made of mostly gifted and thrifted fabric, The Fierce Ones, which sell for $150 each, are fueled by Moran McCleary’s modern vision of Indigenous identity. She personalizes each doll with its own name and story. 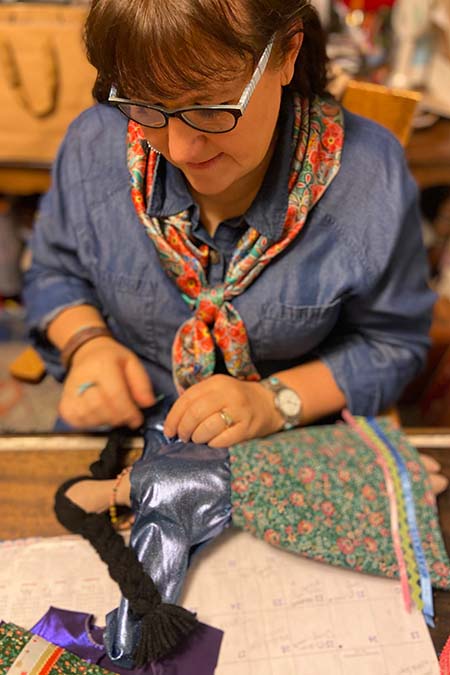 Little Shell Chippewa artist and fashion designer Carrie Moran McCleary works on a Plains Soul Fierce Ones doll. “The dolls definitely created a surge in Plains Soul,” said Moran McCleary (Little Shell Tribe of Chippewa Indians), who lives on the Crow Reservation in south-central Montana. “I’ve had the most sales from them during the pandemic.”

Only one of the latest batch of Fierce Ones dolls remains to be sold, with the next batch expected in February on B. Yellowtail, a California-based Indigenous arts collective with wide exposure.

“I have one doll whose clothes are made, but she needs a wig,” Moran McCleary said. “If somebody buys her, then I’ll put the wig on and send her.”

The Fierce Ones are just one example of Plains Soul’s sole coveted creations. Moran McCleary also infuses Ojibwe and Crow culture and flair into jewelry, brilliantly beaded accessories including hats, ties and purses, and a smart, stylish line of Plains Soul logo merch.

Tribal Business News spoke with Moran McCleary about the rise of the Fierce Ones, Indigenous inspiration, and the art of merchandising.

Why is there only one Fierce One left at the moment?

I had a collection of art at a show at the Brinton Museum in Big Horn, Wyoming that was due in November, so I had to get that done. And I have an exhibit opening in January at The Emerson Center of Arts and Culture in Bozeman, Montana. I didn’t have time to make any more dolls because I’m working on the Emerson piece. And now the dolls are gone. I try to work on a set of 12 at a time and that takes me at least a week and a half.

Why don’t the Fierce Ones have faces?

My dolls didn’t have faces when I was a little girl, and I didn’t know why. I remember my mom saying, ‘When you’re playing with your doll, you know how she feels, if she’s happy or sad.’ And then it’s so funny because years later I was looking up Ojibwe words for dolls, and there is a specific word for a faceless doll. I thought, ‘Oh my God, that’s why my dolls didn”t have faces!’ I didn’t even know.

How did the Fierce Ones evolve?

The reason I was making them originally was as gifts for my goddaughters and it kind of continued. In 2018, Nina Sanders, who is an Aapsalooke Crow curator of historic and contemporary Native American art, saw them. I’m not sure how. She asked if I was interested in selling dolls at a Christmas pop-up gallery in Santa Fe. She wanted me to do traditional style dolls for several different tribes.

How did that offer strike you?

I said, ‘OK, Nina: Number one, I don’t want to do other tribes because people will hate me. I would never do that. And I’m not particularly interested in traditional clothing from 1880. That’s already been done.’ She was really open to whatever I wanted to do. I said, ‘Why don’t we do dolls that are modern?’ I have this thing about our children believing that unless they’re riding horses and hunting or wearing an elk tooth or velveteen dress, do they value themselves as Native people? Or can they recognize that they’re Indigenous, even when they’re wearing jeans and a T-shirt and studying in science class? I wrote this set of Native children’s books 15 years ago about living modern life. My whole theme in life is we are still here, so that was the whole point of the dolls.

Did the emergence of powerful Native politicians and the growing interest in Indigenous issues influence the dolls at all?

When Nancy and I started talking about the dolls, it was at the time when we just had all these Native women get elected for the first time. Ruth Buffalo got elected in North Dakota then Deb Haaland got elected in New Mexico, and it was just so exciting for me as a Native woman to see how we were beginning to make a huge footprint on politics and the American consciousness — that yes, we are still here. That’s what inspires me.

That inspiration and your point seem to be getting across. Don’t the Fierce Ones sell out almost immediately?

They kind of do. It’s really crazy, but they didn’t originally. I made 17 for that original sale in Christmas 2018. And I didn’t sell one. But Bethany Yellowtail from B. Yellowtail Collective was at that same gallery pop-up sale. She loved them and asked if they could take the dolls for the collective. I was shocked because I really look up to Bethany. We talked about what would be a reasonable price point for the dolls because they do have a commission.

How does selling through the collective work? 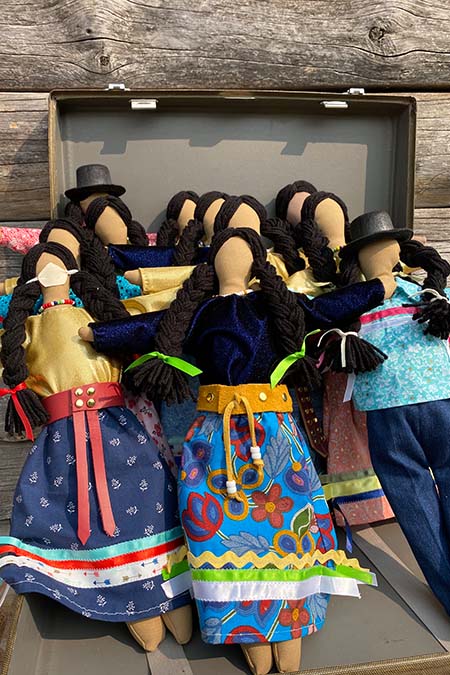 A batch of Fierce Ones dolls by Little Shell Chippewa artist and fashion designer Carrie Moran McCleary, owner of the Plains Soul brand. With them taking their 30 percent, I’m probably not making a ton of money, with my time and the cost of the supplies. But I still want them to be affordable. I don’t want them to be out of control. I realized it would be very good for my exposure as an artist to be at B. Yellowtail. It took a hot minute for that to happen, but at the end of the day it happened. It’s been totally worth it for me to do that. I’m just super appreciative of being able to sell in the collective, because I’ve had the dolls on my website and I don’t have the exposure that B. Yellowtail does.

Did B. Yellowtail sales do anything to ease the financial strain caused by COVID?

At the beginning of the pandemic, Bethany super generously said she wasn’t going to take 30 (percent in commission), she was only going to take 10 percent. That can’t even cover their costs, I think, of having someone photograph a product, put it up on the web, handle the sale, get the item, package the item. Ten percent is pretty lean on their end.

When did the Fierce Ones start to become a sensation?

It was in June of this year that they all of a sudden took off. I had been sending them to B. Yellowtail all along, and I sold one or two dolls a month at the most. There was a point when I asked if they wanted to send the dolls back because I felt guilty that they were not selling and they were having to store them. They said, ‘They're going to take off. We love the doll.’

What do you think sparked the surge in sales?

I think that their drive has come since Black Lives Matter rose this year. People became more interested in shopping diversely and more concerned about small business shopping. The pandemic really changed how people shop. They have more time to shop online and aren’t thinking about going to the mall. They’re thinking, ‘What else is valuable? Something handmade, something where I know something about the maker.’

Have you sought out any loans or grants to bolster Plains Soul?

Two years in, I got an Indian Equity Fund Small Business grant from the state of Montana. That was a game changer for me. I had money to hire someone to build a website and I purchased some merchandise-type inventory, which is great. You can do all the art you want, but it takes time and it’s intensive. So it’s nice to have money off the top that you’re not invested in. I bought T-shirts made with my logo. That was a little bit of a springboard for me because it was income that didn’t require my labor. That’s the great part about merchandise.

Do you think some artists who also have to deal with the business side are wary about embracing the power of merch?

It’s hard to grasp that as an artist, because you want to make things with your own two hands. But there is a point where you need to figure out how to make some base money. I would call it the bread and butter. That’s a hard thing to get to. You just learn about business by being in business. You’re selling your design. You’re selling yourself and then it makes you some money.

What’s next for Plains Soul and the Fierce Ones?

My friend and I were just thrifting in Billings and we found this color of 100 percent wool hair for the dolls that sort of looks like the hair color of a lot of people we know who are mixed. So I’m kind of excited to make the first doll that has a little bit lighter hair and kind of press the boundaries. Here’s the exciting thing I’m all aglow about: I’m actually saving all of the doll money in my business account and it’s going to build a new studio outside my house. I’m going to be ordering a shed. This is the great part: You know that country song, The House That Love Built? This is going to be the shed that Fierce Ones dolls built.