BETS OFF: Seminole sports betting in Florida on hold based on IGRA, tribe appeals 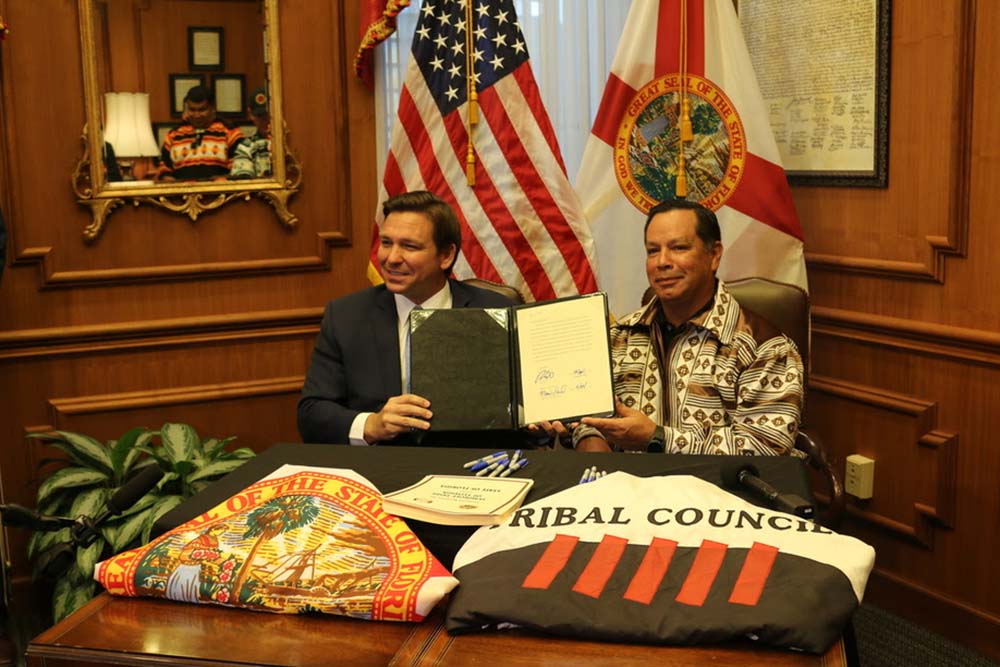 WASHINGTON — The Seminole Tribe of Florida is appealing a decision by a D.C. District Court judge that put the tribe’s exclusive and lucrative sports betting agreement with the state of Florida in limbo.

The tribe also argued for the decision to be stayed, so as not to prevent the tribe from conducting sports betting while the case plays out. The tribe has been collecting wagers and related revenue since the beginning of this month.

“The Tribe’s economic and sovereign interests will be irreparably injured if a stay is not issued pending resolution of the serious legal issues posed on the Tribe’s appeal,” according to a petition filed by the tribe with the court on Nov. 23.

U.S. District Judge Dabney Friedrich denied the request for a stay on Wednesday, which led the tribe on Thursday to file an emergency motion for a stay pending an appeal in the D.C. Circuit Court of Appeals.

Friedrich, who was appointed to the bench by former President Trump, ruled last week that the Indian Gaming Regulatory Act (IGRA) prevented the state and tribe from entering into a sports betting compact that allowed the tribe to take bets from locations off Indian lands.

The tribe’s decision to go forward with the plan with the approval of Florida Republican Gov. Ron DeSantis put to test a legal theory that tribes should be able to operate sports and other online betting in much the same way that Atlantic City is able to legally do in New Jersey. That is, if the wagers are going through servers physically based on Indian lands, they should be legal, just as similar wagers in New Jersey that process through servers based in Atlantic City are legal.

Tribes across the country had been eyeing the Florida compact in hopes of striking similar deals.

However, Friedrich was having none of it.

Friedrich further said that the U.S. Department of the Interior was wrong for allowing the compact to proceed in August on a “deemed approved” basis.

In an Aug. 6 letter that allowed the operation to go forward, Assistant Secretary for Indian Affairs Bryan Newland wrote that he believed the compact was appropriate under IGRA.

“In examining the permissibility of mobile sports betting under IGRA as a novel matter, the department seeks to uphold the intent of IGRA and notes that: 1) evolving technology should not be an impediment to tribes participating in the gaming industry; 2) the pursuit of mobile gaming is in-line with the public policy considerations of IGRA to promote tribal economic development, self sufficiency, and strong tribal governments; and 3) the purposes of IGRA would be served through the improvement of tribal-state cooperation in the regulation of mobile wagering,” Newland wrote in the letter.

Federal officials also argued in a later memo that the tribe and state were “free to denominate where the gaming occurs for state or tribal purposes” and may “allocate jurisdiction and regulatory authority.”

Friedrich, however, ruled that IGRA prevents such freedom. She said the terms of gaming between the tribe and the state would revert to a previously negotiated 2010 compact that has already helped the tribe to become very wealthy via its extensive brick-and-mortar gaming operations.

Multiple commercial gaming entities in Florida had sued the state after the compact at hand was approved, arguing that they were being kept out of the sports betting market, while the Seminole Tribe was being allowed through DeSantis’s agreement to illegally operate in spite of IGRA provisions. They also made the case that the compact “establishes different treatment for gaming facilities on the basis of race, tribal affiliation and national origin.”

Indian gaming and legal experts have been intently watching the case to determine whether any precedents would be established.

“Tribes will continue to pay close attention to the outcome of this court matter,” Scott Riley, a board member with the Tribal Gaming Protection Network, told Tribal Business News. “IGRA was a compromise between the states and the federal government on behalf of the tribes. It would be quite the turn of events if such a lawsuit could void a 30-year, multi-billion dollar agreement between the state of Florida and the Seminole Tribe.”

Kathryn Rand, co-director of the Institute for the Study of Tribal Gaming Law and Policy at the University of North Dakota, said that in her read of the ruling, the biggest issue for the district court is that the state used the governor’s compact, rather than state law, to authorize accepting sports wagers that originate outside of Indian lands by “deeming” them to occur at the location of the server on Indian lands.

“Had there been a valid state law that accomplished the same thing, we think the court’s analysis likely would have been different,” Rand told Tribal Business News.

At the same time, “it remains arguable whether the court is correct that the provisions in the compact actually violate IGRA,” Rand said.

Rand added that in states beyond Florida, there would be “a relatively easy fix” to address Friedrich’s ruling: simply pass a state law that technically authorizes the “deemed” location of the bets as occurring on Indian lands. In that way, state law, rather than a compact, would “authorize” the off-reservation gaming activity.

“But in Florida, with the recent state constitutional amendment requiring voter approval of casino gambling outside of what is permitted by the tribal-state compact, this is a much more difficult fix,” Rand said. “The court’s awareness of the Florida state constitution may have contributed to its decision that the compact was not an appropriate place to ‘authorize’ the tribe to accept mobile wagers that originate outside of Indian lands.”

“IGRA in its present form shapes the framework for brick and mortar gaming in Indian Country,” Brien said. “However, in its present form, the statute does not offer tribes adequate competitive flexibility as mobile and online gaming continues to develop. As Judge Friedrich noted, even where a gaming facility is able to ‘offer in-person sports betting on the same terms’ as a competitor, the ‘inability to host online sports betting would still create a competitive injury.’”

Brien said that without passage of federal legislation, such as the Removing Federal Barriers to Offering of Mobile Wagers on Indian Lands Act, he is “concerned that Indian governmental gaming operations will be relegated to brick and mortar backwaters while commercial- and state-owned facilities take advantage of mobile and online gaming opportunities.”

Seminole tribal officials have not said on what grounds they will appeal. The Miami Herald reported that as of Friday the tribe continued to accept bets via its mobile application.