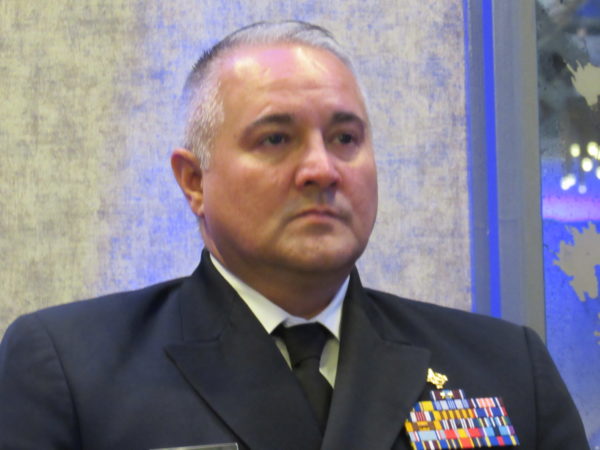 WASHINGTON — Rear Admiral Michael Weahkee was unanimously confirmed by the U.S. Senate on Tuesday to serve as the director of the Indian Health Service (IHS).

Weahkee, an enrolled citizen of the Zuni Indian Tribe, has been serving as the principal deputy director and acting director of IHS since the last year of the Obama administration.

Weahkee was nominated last October by President Donald Trump to serve as IHS director after the president’s first nominee Robert Weaver withdrew his name from consideration.

The IHS provides a comprehensive health service delivery system for American Indians and Alaska Natives in 37 states in Indian Country.

“Admiral Weahkee has already demonstrated strong leadership at the helm of the Indian Health Service. I congratulate him on being formally confirmed to the position of IHS Director today and thank the Senate for confirming him during this crucial time. He has played a vital role in improving quality across IHS and strengthening our government-to-government relationship with tribes. As we combat the COVID-19 pandemic, which has already posed a serious threat to Indian Country, I am thankful to have Admiral Weahkee leading IHS and overseeing the work being done by heroic IHS staff on the front lines.”

Weahkee was praised by Sen. John Hoeven (R-ND), chairman of the Senate Committee on Indian Affairs.

“I want to thank my Senate colleagues for confirming President Trump’s nominee to head the Indian Health Service,” Hoeven said after Tuesday's vote. “Rear Admiral Weahkee is a strong leader, who has committed to help the agency fulfill its treaty and trust responsibilities to the many American Indian and Alaskan Natives receiving health care services from the IHS. Especially, in light of the outbreak of COVID-19, the IHS must continue to quickly respond to the needs of tribal communities and the experienced leadership of Rear Admiral Weahkee is greatly needed during these times.”

Within the IHS system, there are over 605 hospitals, clinics, and health stations located on or near tribal communities. As director, Weahkee will oversee the administration of health care programs and services within the agency, including management of the total budget of approximately $7.4 billion and employment of more than 15,000 professionals.

Previously, he served as the chief executive officer at the Phoenix Medical Center. Weahkee received his Bachelor of Science in Health Care Management from Southern Illinois-Carbondale and Masters of Health Services Administration and Business Administration from Arizona State University.