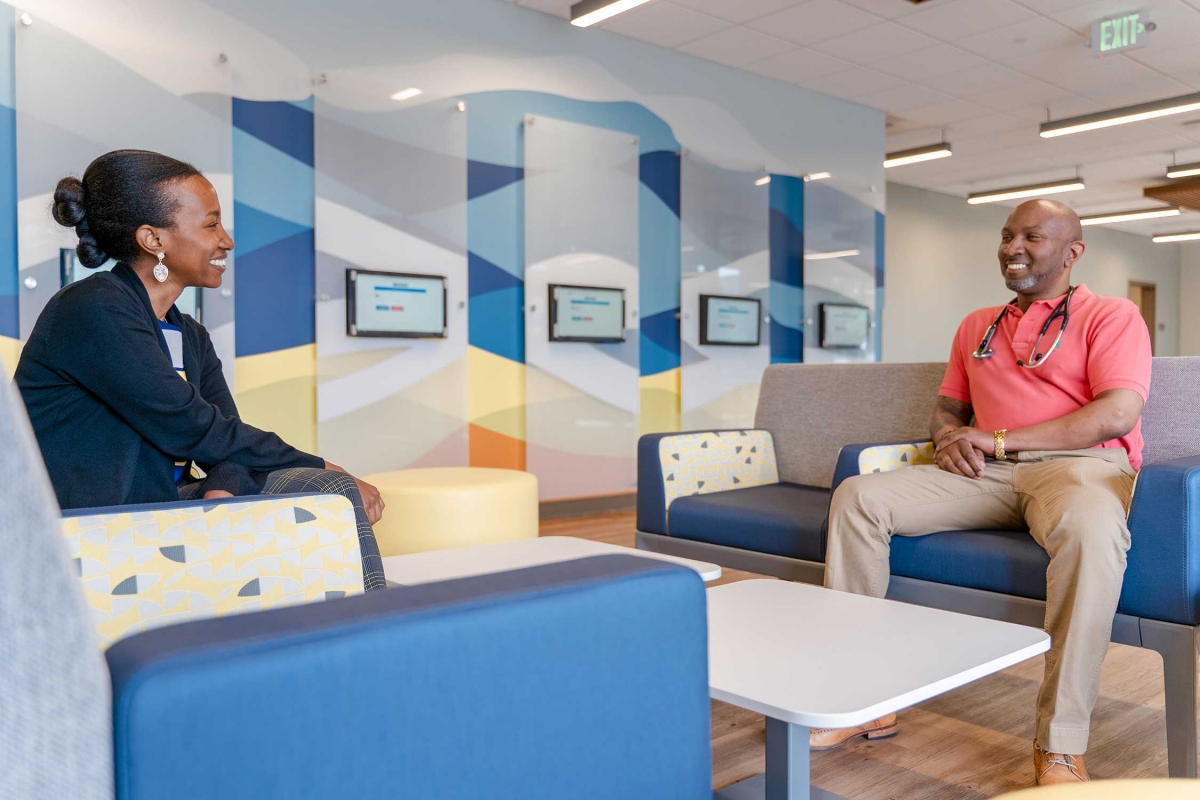 Jody was close to achieving her dream of becoming a writer. A member of the Muckleshoot Tribe near Seattle, she had gone from living on the streets of Seattle as a teen to nearly finishing a creative writing degree, and had plans to get her master’s degree at New York University. But debilitating back pain caused by an injury she sustained as a teen forced her to drop out of school, just a handful of credits shy of her bachelor’s degree.

Jody moved home with her mom, who took care of her while she endured various ineffective procedures and prescriptions for her worsening pain.

“I was bedridden two or three weeks at a time. It started progressing more and then, beginning around 2010, I was bedridden for just under three years,” she says.

By September 2019, she was hooked on the narcotics she was on and scared of going through withdrawal if she ran out of her prescriptions.

At her sister’s behest, she called WeCare Daily Clinics, an off-reservation addiction treatment clinic owned by the Muckleshoot Tribe. The clinic, which opened its doors last year, offered Jody and others in similar circumstances a caring, stigma-free atmosphere and a slew of additional services to get patients back on their feet. But it’s also helping the tribe — both combating the crisis of addiction in its community and serving as a vital revenue stream, as well as a model for an innovative business partnership that can be replicated in other parts of Indian Country.

“I’ve seen other places, and they just tend to look down on everyone and judge everyone, and there’s no empathy, no support, no care, no real concern,” says Jody, who spoke with Native News Online on the condition that her real name would not be used in order to protect her identity.

‘A system that works in their favor’

That’s exactly what Kurt Brenkus, who helped bring WeCare to life, is trying to avoid.

“We have people traveling to our location that will spend over an hour commuting one way because they say ‘you treat me like a human,’” Brenkus said.

While the clinic is entirely funded and owned by the Muckleshoot Tribe, who earn almost all of the profit from its operation, Indigenous Pact, a managed services organization Brenkus founded, handles the logistical and legal challenges associated with running an addiction treatment clinic.

Brenkus launched Indigenous Pact to fulfill the dual goals of creating “financial inclusion within the health industry” and “expanding access to high-quality health care on and off the reservation.”

The entrepreneur is no stranger to the health care industry. He previously founded an Ohio-based health care software company, and has held several leadership positions at large health tech companies, most recently as chief of staff at Minnetonka, Minn.-based United Healthcare.

Brenkus and his wife, a member of the Oneida Nation, were in the process of raising capital for another health tech venture when a family tragedy changed their plans.

After his wife’s sister died, leaving Brenkus and his wife to adopt her two young children, he realized how difficult it was to access health care for the children through the Indian Health Service. The closest IHS facility was 500 miles away.

“As I started to go deeper, I became obsessed with the issue. I realized that we had a Third World health care system right under our nose,” Brenkus said. “A lot of people that need help need to have a system that works in their favor.”

Brenkus found a first partner for this model in the Muckleshoot Tribe, whose proximity to a major city and existing effective medication-assisted treatment program made them an ideal partner for testing the business. One of the biggest issues Brenkus and the tribe wanted to solve was the stigma that often surrounded treatment among the Muckleshoot’s small and tight-knit tribal community.

“Patients were avoiding treatment because of social stigma, so they would go into the clinic and they didn’t want everyone kind of knowing their business, because it’s a tribal clinic,” he said.

To get around this issue, the partners located WeCare outside the reservation, in Seattle-adjacent Auburn, Wash.

“We do get some Muckleshoot patients who are here precisely because it is not overtly a tribal-looking place, because there’s only about 1,200 or 1,300 people in the Indian tribe,” says WeCare medical director Dr. Tom Hutch. “The stigma that each community, tribal and otherwise, carries, really weighs heavily on the clients that are trying to get treatment.”

The Muckleshoot Tribe considered the clinic as an opportunity to reduce the number of people struggling with addiction both inside and outside the community, while removing temptations for tribal members.

“We have a behavioral health program up at the tribe that works really hard with individuals who are struggling with addiction. And what we were finding is, when somebody would fall off of our program, we’d find them in neighboring communities,” said Joe Olujic, CEO of the Muckleshoot Development Corp., who brokered the partnership with Brenkus.

“One of the objectives of WeCare was to try to help the neighboring communities to put more of a gap between where the reservation is and where these issues occur,” Olujic said.

Muckleshoot Development Corp., the tribe’s non-gaming economic development arm, also entered into the deal to diversify the tribe’s revenue streams. The funds from the clinic, along with other revenue sources, go into the Muckleshoot’s tribal fund. This money is used to support health care, education, elder programs and other social welfare projects for the tribe.

The WeCare clinic has already generated millions, and was one of the only Muckleshoot-owned businesses that has remained fully operational throughout the COVID-19 pandemic.

WeCare’s stigma-free environment, attractive physical space and modern medication-assisted treatment program are all draws for patients to seek treatment at the clinic and refer the facility to others.

Perhaps the most unique aspect of care, however, is the level of continuity the clinic offers to ensure patients complete their treatment programs. The clinic has a robust transportation service — a huge logistical feat, according to Hutch — to ensure patients get to and from appointments. The clinic also gives patients rides and funds to renew or obtain government IDs and provides to-go meals.

Brenkus said the clinic even has a babysitting area for children and waterproof, insulated, self-sanitizing animal houses for patients with pets, creating what he calls a “wraparound system of care.”

Although the clinic is new and data on its effectiveness remain scarce, anecdotally, Olujic has already observed the clinic’s positive effects on the community.

“We know in our minds that for every client that’s coming in every day and is stable, they’re able to go out and function,” he says. “We’re seeing our clients getting jobs, we know they’re seeing and being reunited with families, whether it’s their mother, father, brother, sister, or sometimes their children. As those improve, I think the end result is the community’s improving as well.”

A prototype for expansion

Using the lessons learned from WeCare’s launch, Brenkus hopes to expand this model to other tribes in the future, although he’s not yet sure where he might go next.

“This clinic is really a prototype, and everything that we’ve done has been built for scale,” he said. “The recipe, if you will, has been codified, as well as the process for other tribes to be able to open this and turn this into an economic development opportunity for them.”

Brenkus acknowledges that not every tribe may have the cash flow to open a facility like WeCare. With Muckleshoot’s casino business and close proximity to Seattle, the tribe was able to fully fund the clinic.

Each new clinic costs between $5 million and $10 million to open. Brenkus is actively raising capital to be able to open clinics with tribes that may not have as much cash to spare. Indigenous Pact will work with tribes to contribute as much as 100 percent of startup costs for future clinics, which would then be paid back with “incredibly low interest rates,” he said.

WeCare patient Jody credits the clinic for turning her life around. Since walking through the clinic’s doors just more than a year ago, she’s started a new job in marketing and aims to finish her creative writing degree. She hopes to someday become a drug and alcohol counselor, and credits WeCare’s support groups, medication-assisted treatment program and stigma-free atmosphere for her success.

Moreover, Jody said she learned to think of her addiction as a disease rather than a personal weakness.

“(The clinic has) given me my life back and I’m able to work again and maintain even my independence in my own home, which is something I couldn’t have done before all this,” she says. “I can't express enough how good it feels just to be here without being judged or put down or looked down upon.”

EDITOR’S NOTE: This story was published as a joint project between Native News Online and Tribal Business News.