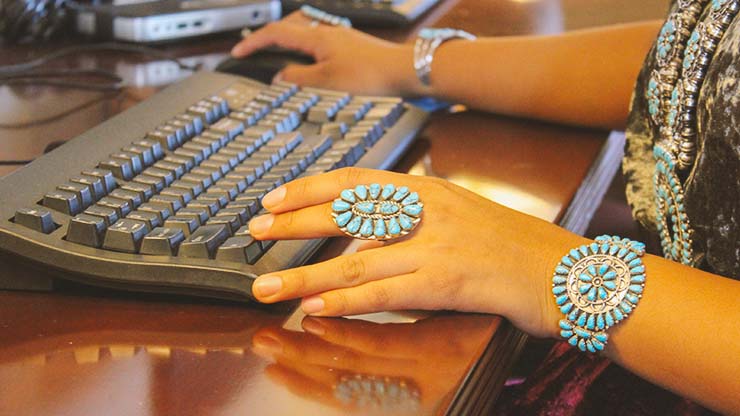 Indian Country faces myriad challenges in addressing its chronic lack of broadband access, which became ever more apparent recently in the more than 280 applications for funding tribes submitted through the federal Tribal Broadband Connectivity Program.

In Alaska, for example, three Alaska Native Corporations and a communications company have joined forces to propose bringing fiber to residents along the Yukon and Kuskokwin Rivers.

The partnership between Calista Corp., Doyon Ltd., Gana-A’Yoo Ltd. and telecom firm Alaska Communications promises to bring 12,000 people online — if it receives funding to get off the ground.

However, whether the project will get the funding to move forward remains an open question. The reason: Tribal interests and other Native entities submitted applications for more than $5 billion in projects, well in excess of the available funding.

The result is greater competition among the proposals to fund their projects. The applicants expect to hear back about grant awards by the end of 2021.

While the program may expand to $3 billion total in funding under an amendment in the $1.1 trillion infrastructure bill currently awaiting a vote in the U.S. House of Representatives, it still fails to meet the colossal need described in the NTIA proposals.

‘Indicative of the need’

Heather Gate, VP of digital inclusion at broadband access-focused nonprofit Connected Nation, said she was unsurprised by the amount of demand.

“It is indicative of the need,” Gate said. “Because tribal communities are the most underserved populations, we’ve known that for a long time. The demand was not a surprise at all.”

More than 50 percent of Native households lack access to broadband internet, locking them out of crucial COVID-era tools such as telehealth, video calls and online teaching. The pandemic has accelerated the needs of tribes already struggling to get projects off the ground.

The project would improve connectivity for both businesses and tribal citizens living along the technologically isolated route, where currently some residents don’t even have landline phones.

In a prior Tribal Business News report, Engle said that the potential grant funding was crucial to the project’s success and essentially serves as a lifeline to get the families access. The cost to access the remote location with a small population make it difficult for providers to realize a return on their investment, leaving the federal funding as a “crucial” part of the project.

Now, overlooking a hyper-competitive field of grant requests, Engle focused on the ways the Yurok Tribe’s application process went well and the aspects of the proposal that make them “perfect” potential awardees.

“My application was very much realistic for the award period, and I would call it phase one. I feel that Yurok Tribe is in the exact position that this funding is meant to solve,” Engle said. “We’re looking forward to generational sustainability and not just catching up with the digital divide but solving the problem for this and future generations.”

Addressing the problem permanently would require continued funding and an expanded focus on more than just infrastructure, Engle said.

Once the fiber is in the ground, the tribal entity would need to have staff on hand to maintain it and ensure people stay online once connected, she said. Training would be required for everyone from techs to the end users going online for the first time.

“We hope to see a resource center for rural tribes that identifies quality training opportunities, funding opportunities, and scholarships for tribal employees to participate,” Engle said. “We would love to work on a pilot project that trains tribal members to fill key broadband and telecommunication positions.”

Gate at Connected Nation said the grant’s flexibility on potential funding targets — whether infrastructure, staffing, or even getting devices into homes for people to use — was likely what attracted so much attention to the program in the first place.

“Affordability was going to be a need that was addressed through this program, and so was skills training,” Gate said. “It really just allows tribal communities to have these comprehensive programs.”

Gate said the holistic approach behind the Tribal Broadband Connectivity Approach serves as an important example to take forward with future funding, if it materializes.

“We have to look at this from a 360-degree view: How do you help people? How do you meet them where they are?” Gate said.

The Tribal Broadband Connectivity Program came as part of a rush of federal funding that flooded into Indian Country as a result of COVID-19, primarily through allocations in the CARES Act in March 2020, the Consolidated Appropriations Act in December 2020 and the American Rescue Plan Act in July 2021.

That funding, along with accompanying grants like the Tribal Broadband Connectivity Program, provided an opportunity to really study the broadband problem in Indian Country and take unprecedented action to address it, Gate said.

She cited initiatives such as making tribes eligible for infrastructure grants from the $42.45 billion Broadband Equity, Access, and Deployment Program as a solid step forward in broadening the funding pool and increasing access.

“The good news right now is that there’s a lot of different programs that have come through as a result of COVID-related funding that are targeting the areas that most need to close that digital divide,” Gate said. “COVID, as devastating as it is, has provided us an opportunity to be honest about the challenges we’ve always had. I think it continues to be an important time for us to pay attention and make sure these funds go to these places that need them the most and that those problems are resolved.”

Gate said achieving sustainability in building out and maintaining a more equitable broadband structure comes through examining the effects of these new funding sources and making the most effective ones permanent.

“There’s so much going on around us that we really need to settle down and see whether these gaps are being filled, and ultimately decide whether some of these programs should stay,” Gate said. “The injection of funding is very positive in that we’re looking to address this issue. Now we have to make sure we’re deliberate and have good strong plans in place to build on what we’ve done.”

In the meantime, groups like the Yurok Tribe are left hoping they can finally get the funds they need to bring broadband access to their people.

“It’s 2021 and over one-third of the homes on the Yurok Reservation still lack basic utilities like power and broadband,” Engle said. “This is hugely critical infrastructure, a serious lack, and a challenge to resolve, which is why it hasn’t been resolved yet.”