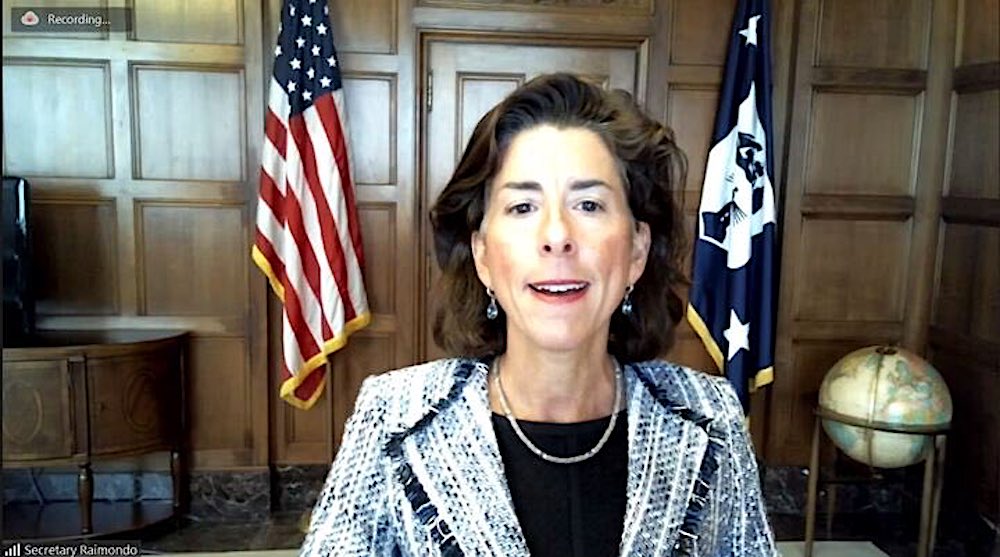 WASHINGTON — Tribal officials are asking whether the U.S. Department of Commerce and other federal agencies truly understand the depth and breadth of the digital divide in Indian Country, especially for the neediest tribes.

That worry was made clear during a session of this year’s National Congress of American Indians (NCAI) annual meeting on Oct. 13 when Joe Garcia, head councilman of the Ohkay Owingeh, pondered statements by Commerce Secretary Gina Raimondo during the conference.

Raimondo said plenty of good things, according to tribal leaders and advocates, but they worry that she and other federal officials are not pressing for enough broadband money and agency coordination for disadvantaged tribes. Instead, they feel she and others in the federal bureaucracy might be expressing a bit too much excitement about what they are doing, while losing sight of the bigger picture of inequity for tribes in this space.

A particular moment during the conference that caught Garcia’s attention was when Raimondo noted her previous June announcement of the $1 billion Tribal Broadband Connectivity Program, which she delivered alongside Vice President Kamala Harris and Interior Secretary Deb Haaland. Funded under the American Rescue Plan, the Tribal Broadband Connectivity Program is meant to support unserved and underserved tribal communities on this front.

Raimondo said that the program has received a whopping $5 billion in tribal grant applications for the $1 billion pot of money, as noted in previous Tribal Business News reporting.

“We have been thrilled by the response from tribal communities,” Raimondo said. “We received 300 applications from all across the country, from large infrastructure projects to small internet adoption programs.”

“We have five times the demand as we have money appropriated from Congress, so I just really want to thank every one of you for applying and for your commitment to supporting the broadband needs of your communities,” she added.

She also expressed hope that Congress will ultimately pass the bipartisan infrastructure legislation, which would provide an additional $2 billion for the Tribal Broadband Connectivity Program.

What Garcia wanted everyone to understand, as he expressed during a later NCAI session, is that there’s actually a tribal need for much more broadband money than any of the funds currently on the table, so this might not be the right time to be “thrilled” and thankful. It’s also not the right message for Raimondo and other federal officials to be expressing, according to tribal advocates, who say it illustrates a lack of understanding the true scope of the problem.

Three-hundred tribes applied for that $1 billion, “and it’s not going to get us there anytime soon unless those numbers are increased,” Garcia said.

Garcia went on to say that the $2 billion proposed in the bipartisan infrastructure bill that has yet to pass Congress “is already used up” as well, because of the longtime vast federal underinvestment in this area.

“I’m hoping that the administration is listening to this,” Garcia said, adding that he is happy to provide more information.

‘Annoying,’ but still a foundation

Matthew Rantanen, director of technology for the Southern California Tribal Chairmen's Association, told Tribal Business News he feels there’s a disconnect happening at Commerce and other federal agencies that he calls “unfortunate.”

“For government employees to be saying, ‘Wow, look at all this demand, it’s so cool that all these people applied for our program,’ it’s quite annoying,” said Rantanen, who has worked in the tribal internet world for 20 years. “They kind of lose sight of some of the things that are going on on the ground and how the optics might be.”

The $1 billion is a “great foundational start, don’t get me wrong,” Rantanen added, but he does not view it as a solution, especially since he and other advocates have been asking for that amount for “as long as 10 years now. … Currently, we’re far past that number.”

Rantanen says he and other tribal internet experts estimate the need to be $7 billion just to digitally connect most reservations, not including the cost to establish the many middle mile connections necessary to loop in tribal communities to networks.

Inflation, labor costs and supply chain demands related to COVID may increase that figure for a long time to come, Rantanen added.

“What we thought was that this foundational $1 billion was going to kind of set the tone, and then in the bipartisan bill that has yet to pass, we were originally set to get $6 billion more,” he said. “Somewhere in the politics, it got cut down to $2 billion at the moment. Now we’re not in the same ballpark. We’re only a third of the way there because the funding has been cut out from under the infrastructure bill.”

Beyond Commerce, the U.S. Department of the Treasury is playing an increasing role in tribal broadband development.

“Treasury is taking a hard look at that middle-mile piece, that fiber piece, that helps get the broadband extended,” Rantanen said. “That would offload that part of the problem onto Treasury dollars, which would be very helpful because it will stretch the $1 billion much further. But clearly, it’s not going to stretch it to $7 billion.”

Earlier this month, Treasury announced a Capital Projects Fund worth $100 million in overall funding for tribal governments, including for them to address broadband development.

Treasury will allocate to tribal governments and the state of Hawaii approximately $167,504 each under the program, according to the department.

Tribes also have the option to spend some of the pandemic monies they received under the American Rescue Plan Act and other COVID-related funding from Treasury on broadband, but Rantanen predicted many tribes with bigger infrastructure needs will not spend on broadband first.

Plus, some tribes have expressed hesitancy to allocate ARPA funds for broadband if more money may come for that from federal agencies, or in future legislation.

“An elected tribal leader is at risk if they build broadband instead of running water,” Rantanen said. “Everything is political. It’s complicated. But COVID helped us all realize how important it is to have broadband in our houses. It didn’t matter what walk of life you came from.”

One sign that more federal money could be coming: The USDA announced on Oct. 22 new rural broadband programs that will potentially help tribes make up some of the necessary dollars. Beyond that, the bipartisan infrastructure bill is still on the table as well.

Hope that gap can be bridged

Commerce, Treasury and USDA funding is welcome news, said Joe Valandra, a broadband consultant with Tribal Communications LLC, but he noted that “the gap in Indian Country is huge.”

“The bottom line is that Congress and the administration must put a lot more money into this gap,” Valandra told Tribal Business News. “It will be in the tens of billions of dollars, but the investment cannot wait.”

The hope from tribal advocates is that Commerce receiving such a vast number of tribal applications will help federal officials better understand the extent of the problem — as well as the need for more funding and improved agency coordination.

“The demand for grants is one good barometer of the need, without doubt,” Valandra said.

OJ Semans, a tribal broadband consultant with Native Connections, told Tribal Business News he is hopeful that “the overwhelming response” will give Commerce and other segments of the government “clear and convincing evidence that money needs to be expended to meet these needs.”

“There has certainly been an expectation that the additional funds earmarked for broadband in the legislative vehicles will help get tribes closer to full funding,” Semans said. “I don’t think that is a pipe dream because funding broadband expansion has been a bipartisan issue from day one and will likely outlast any dicing and slicing that goes on. That combined with efforts already underway at Treasury and USDA makes things brighter.”