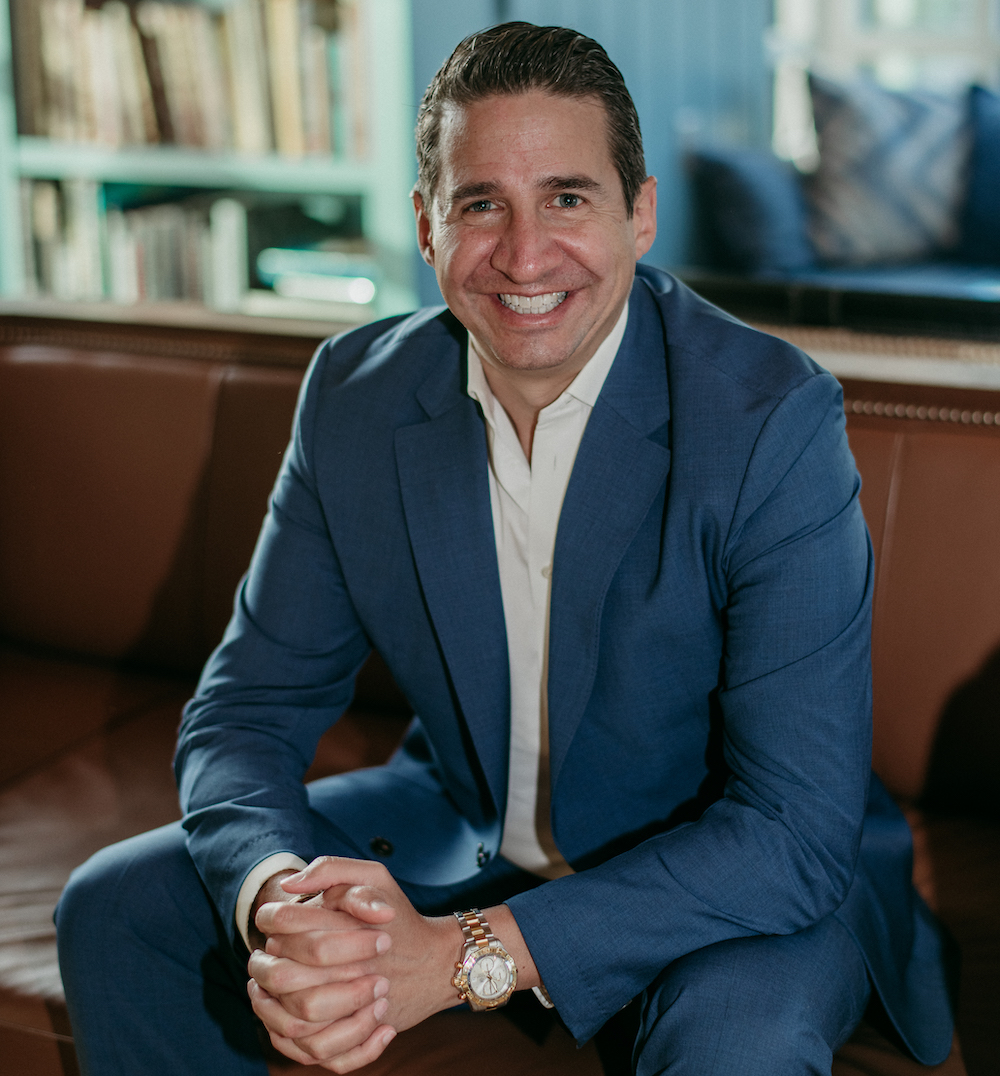 Fast forward a few months after he left the tribally owned private capital investment firm, and the citizen of the Match-E-Be-Nash-She-Wish Band of Pottawatomi Indians is rolling up his sleeves as part of the executive team at the National Minority Supplier Development Council, where he’s tasked with building out an infrastructure to better connect certified MBEs to available sources of capital.

“I’ve been extremely vocal about how I feel that the NMSDC has not fully engaged Indian Country in a way that we could, in a way that we should,” Trevan said. “This is the first time that the NMSDC’s executive team is representative of all the segments the organization represents. This is the first time that there is a Native American that sits within the executive leadership team.”

Trevan’s journey from critic of the NMSDC to working to effect change from the inside started at the end of 2021, about six months after his resignation as CEO of Gun Lake Investments, which he had helped co-found and led for more than six years. He had spent months researching issues around access to capital for minority-owned businesses and decided to launch Nclude Capital, which he envisioned as one of the few private equity firms serving MBEs.

The firm planned to make investments in minority owned lower middle market companies, which Trevan describes as an intentional move to fill what he foresees as a future market need.

In the wake of the civil unrest following George Floyd’s death, corporations and financial institutions committed tens of billions of dollars toward addressing racial inequities. That includes support for minority owned businesses, but most of it has been targeted at the earliest stages of the capital continuum, Trevan said.

“Very little of that capital has been invested into the private equity space, which tends to focus more on mid- to late-stage opportunities with revenues that are typically larger than what angel and venture is focused on,” he said, noting his familiarity with middle market investing from his experience at Gun Lake Investments. “Also, knowing the abundance of capital that was moving into the minority-owned venture and startup space, that was going to stimulate a lot of activity in the early stage that would eventually need more mid-stage capital options such as growth, equity, and acquisition capital.

Trevan chalks up his challenges in starting Nclude Capital to the sizable returns that large private equity fund managers have generated in recent years, which paved the way for investors to reinvest their proceeds with managers they had ongoing relationships with and who had proven results.

Realizing he needed to build an ecosystem of MBE capital from the ground up led Trevan back to the NMSDC.

“As I was planning this strategy out, the NMSDC was looking for an entrepreneur in residence to be on the inside and work with them to better build out this ecosystem for them. The timing was a bit serendipitous because I needed that ecosystem to be strong to eventually pursue my own private equity goals, and the NMSDC needed somebody to really focus specifically on this opportunity of shoring up their infrastructure to better connect capital with their MBEs,” he said.

In July, Trevan accepted a contract position as Vice President of Minority Business Enterprise Growth and Entrepreneur-in-Residence at the NMSDC.

“We are very excited to welcome Kurtis to NMSDC,” CEO and President Ying McGuire said in a statement. “His experience and leadership will enable us to set a bold course as we march toward $1 trillion in certified MBE revenue and ending the racial wealth equity gap once and for all.”

The National Minority Supplier Development Council got its start in 1972 to help corporations diversify their spending with companies owned by historically excluded communities of color.

To help good corporate actors ensure their diversity spending went to actual minority-owned businesses, the council established the Minority Business Enterprise certification, which the organization describes as the “gold standard” for Corporate America.

The NMSDC facilitates connections between more than 15,000 MBEs and some 1,500 corporations resulting in an annual economic output it estimates at nearly $400 billion.

As well, corporate supplier diversity programs and spending with minority owned partners is only expected to increase. A 2021 study from Miami-based strategic consultancy The Hackett Group Inc. (Nasdaq: HCKT) found that companies globally are expected to increase their diversity spending goals by more than 50 percent by 2025, when they are expected to steer 13 percent of their total spending to companies owned by underrepresented diversity groups. Currently, only 7.2 percent of corporate spending is targeted at diverse suppliers.

According to a summary of the survey’s results: “Finding quality diverse suppliers will be a growing challenge for supplier diversity programs as program goals and ambitions rise.  Organizations will also need to actively develop diverse suppliers.”

That’s where Trevan is focusing the bulk of his efforts within the NMSDC. The organization wants to do a better job connecting its MBEs with the capital they need to position themselves to meet demand from NMSDC’s corporate partners, which include the lion’s share of the Fortune 500.

With “huge tailwinds” driving supplier diversity spending, the NMSDC also is focused on engaging its corporate members to “understand where their industries are going so that we can better identify and prepare MBEs today and continue to shift MBEs into higher value, higher margin, and more wealth-creating opportunities,” Trevan said.

Along with those conversations, he’s also leading a team that’s building out a database of available capital resources to help MBEs scale, which will be paired with a “high-touch” effort to effectively serve as a matchmaker to connect those companies with capital providers.

“As part of this high-touch model, this gives me the ability to work with the C-suite, with industry groups and with capital providers to make the introductions that are needed to help everybody fill their own demand for MBEs,” he said. “It also really starts to bring together the major decision makers and leaders in this space to really stimulate new thought about where supplier diversity is going.”

Within the NMSDC, Trevan also is on a mission to break down barriers so enterprises in Indian Country have a chance to compete for that corporate diversity spending.

As previously reported, Gun Lake Investments and other tribally owned companies in West Michigan have faced “circular exclusion” from the Michigan Minority Supplier Development Council, one of the 23 regional arms of the NMSDC that certify MBEs in their respective geographic areas.

The Michigan office previously denied applications for MBE certification for portfolio companies of Gun Lake Investments and Grand Rapids-based Waséyabek Development Co., the non-gaming investment arm of the Nottawaseppi Huron Band of the Potawatomi. The move came after the Michigan office canceled Gun Lake Investment’s corporate membership, noting that minority-owned companies are excluded from becoming corporate members, and despite other regional offices around the country certifying tribally owned firms as MBEs.

“(The Michigan office) was interpreting the rules that it had to be a minority at the top seat in every one of those companies,” said Deidra Mitchell, president and CEO of Waséyabek Development Co. “That is the criteria that fits a single-owner minority business, but not one that’s owned by a tribal corporation or tribal entity.”

Even from within the NMSDC, Trevan says he’s advocating for better understanding of how Indian Country works so that other tribally owned companies don’t face the same challenges.

“I believe that a lot of the challenge is simply due to misunderstanding and not having strong relationships with tribes within our ecosystem,” he said. “Having been through this firsthand, I’m already able to provide immediate value through the executive leadership team on educating and being a resource as to how tribal businesses operate, how they’re owned, controlled and managed, and the differences that often exist between tribally owned businesses and Native American-owned businesses.”

While Mitchell acknowledged an ongoing communication impasse with the Michigan office, she’s left to wonder if some of that education has trickled down to regional offices. Last month, two of Waséyabek’s portfolio companies, Grand Rapids-based business turnaround and consulting firm DWH LLC and Nunica-based precision performance engine manufacturer Baker Engineering LLC, were recertified as MBEs. Both companies gained their original MBE certification when they had a minority as a top executive, but those leaders have since moved on, leaving the tribally owned businesses without diverse day-to-day leadership.

“We’re hopeful that it’s precedent-setting, we’re hopeful that that means the stance is changing about tribally-owned economic development companies,” Mitchell said. “We were expecting that we would not be re-certified, but we’re very happy to report that we were, which we’re hopeful is signaling a change in their stance on that.”

Waséyabek currently is in the process of certifying another portfolio company as an MBE, and Mitchell expects to certify others “if this is truly a change in policy.”

“All of our companies could benefit from being minority-certified through Michigan’s certification process,” she said. “Some of our bigger state corporations rely solely on NMSDC’s interpretation of minority status and that is always a thing that was concerning.”

Mitchell added: “I’m just so proud of Kurt, the work that he’s done and the position that he’s taken on to help not only tribes, but all communities of color in the business community. I’m really looking forward to what he can get accomplished.”

For his part, Trevan plans to conduct strategic outreach to leading organizations in Indian Country to drive awareness of the MBE certification and “to make sure that they are aware that there’s somebody that’s experienced in the tribal business space that is sitting within the executive team at the NMSDC.”

While Trevan hit pause on his immediate plans for Nclude Capital to focus solely on the NMSDC position, he’s hopeful that establishing the organization’s model and successfully connecting MBEs to financial resources will ultimately prove the need for his concept behind the fund.

“Nclude Capital is still my professional goal, to raise capital and to launch a private equity platform that’s focused on this space,” he said. “In order for platforms like Nclude Capital to be successful, we need the ecosystem to be strong.”