The United Nations Committee on the Elimination of Racial Discrimination is calling for what is purported to be a first-of-its-kind investigation of treaty rights violations by the United States. The issue at stake pertains to Native Americans affected by the ongoing Line 3 pipeline project in northern Minnesota.

According to a letter written by committee chair Yanduan Li to Benjamin Moeling, Chargé d’Affaires of the Permanent U.S. Mission to the United Nations, Li is concerned about the possible mistreatment of Anishinaabe citizens as a result of Canada-based Enbridge Energy’s tar-sands pipeline reconstruction project.

If the violations are verified by the United Nations, the letter says it would be a breach of the International Convention on the Elimination of All Forms of Racial Discrimination, which has been signed and ratified by the U.S.

If the international law was proven to be broken, it would give Indigenous people in the U.S. another tool to battle broken treaties and restore their sovereign rights, according to several Native legal experts. 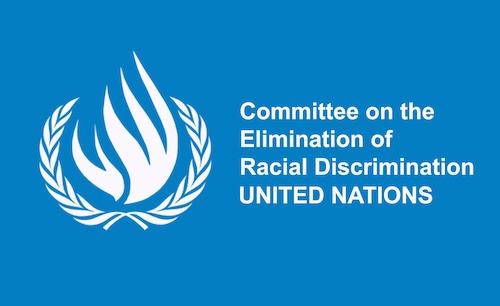 The committee is requesting information from the U.S. by Oct. 15 as it conducts its investigation.

“The information received alleges that the decision of the Government of the United States of America and of the State of Minnesota to permit the expansion of a tar sands pipeline (‘Line 3’) has been conducted without adequate consultation with and without obtaining the free, prior and informed consent of the Anishinaabe indigenous peoples, despite the serious harm such pipeline could allegedly cause,” Li wrote in the August 25 letter.

“It is further alleged that the ‘Line 3’ project would infringe the rights of the Anishinaabe indigenous peoples, in particular by significantly reducing their traditional source of food, the ‘manoonim’ wild rice, by encroaching on their lands and sacred sites and increasing health risks connected to environmental degradation, due to, in particular, air and water pollution. Reportedly, this project would exacerbate the already disproportionate impact of climate change on indigenous peoples in Minnesota, putting at risk their watersheds and their wild rice ecosystem.”

“According to the information received, the ‘Line 3’ project would, furthermore, increase the risk of violence against indigenous women, including sex trafficking and sexual abuse, due to the significant influx of workers and the establishment of camps composed of male workers. It is also alleged that the intensified presence of law enforcement officials and private security companies would increase the risk of excessive use of force by members of the police and of these security companies against peaceful protestors, in particular those belonging to the Anishinaabe communities.”

Li also expressed concern that domestic remedies available to Indigenous people “do not provide a legal basis for addressing the underlying cause of structural discrimination.”

“Consequently, lawsuits filed against ‘Line 3’ project by Anishinaabe organizations have reportedly been rejected without duly considering its impact on the human rights of the Anishinaabe,” Li wrote. “In addition, the Committee has been informed that the usufructuary rights of Anishinaabe indigenous peoples to hunt, fish and gather wild rice, among others, are based on a series of treaties signed between the Anishinaabe and the Government of the United States of America.”

Li added that the Anishinaabe reportedly “retain such usufructuary rights, which have been upheld by a ruling of the Supreme Court of the United States of America (Minnesota v. Mille Lacs Band of Chippewa Indians, 526 U.S. 172, 1999).”

The committee further wants assurances from the U.S. that it will protect Indigenous livelihood, health and culture; prevent violence against Indigenous women and protesters, and “guarantee the right of the Anishinaabe indigenous peoples to an effective remedy with regard to possible violations of their rights in the context of the permission and construction of the ‘Line 3’ project.”

Li is asking the U.S. “to provide details on the status of the treaties concluded between the Anishinaabe indigenous peoples and the Government of the United States of America and on measures adopted to guarantee the respect of the rights of the Anishinaabe under such treaties, in particular their usufructuary rights as upheld by the Supreme Court’s ruling mentioned above.”

Native American groups, including Honor the Earth and the Giniw Collective, were made aware of Li’s call for an investigation on Aug. 31. They had requested in March that the committee investigate the potential abuses and treaty violations.

Organizers with the groups say that the investigation, which shines a strong light on treaty rights and sovereignty, is a first for the committee in its engagement with the U.S.

“When U.S. policy inadequately considers the rights of Indigenous Peoples, international mechanisms such as the UN Committee on the Elimination of Racial Descrimination are crucial to prevent the devastating impacts that cannot be undone once they occur,” Kate Finn, executive director of First Peoples Worldwide, a partnership between the University of Colorado Law School and the Center for Ethics and Social Responsibility at Leeds School of Business, said in a statement.

“The letter from the Committee plainly articulates the allegations of rights violations attendant to Line 3 and the ways in which the actions of the U.S. Government fail to respect those rights and, in turn, perpetuate racial discrimination.”