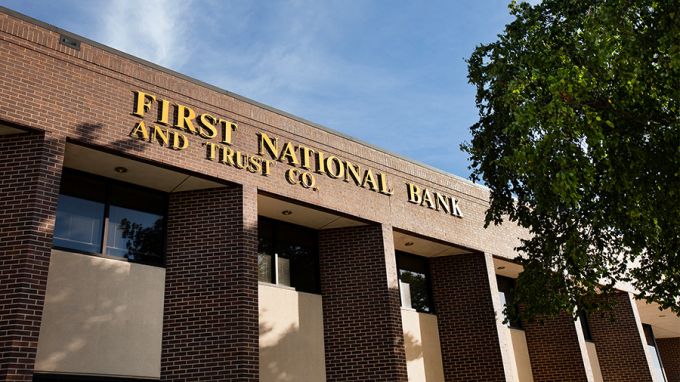 Details
By Joe Boomgaard
Finance
May 4, 2021

As well, The First State Bank Chairman and CEO David Durrett and President and CFO Chris Turner will join the team at First National Bank, a federally chartered bank.

If approved by regulators and shareholders, the deal would create a community bank with more than $733 million in combined assets. The banks expect the acquisition to close in the third quarter of this year.

Terms of the deal were not disclosed. Executives at First National Bank acknowledged a request to comment, but did not respond as of press time.

First National Bank, which focuses on consumer banking, expects to grow its commercial banking services with the addition of The First State Bank, which specializes in small and middle market lending.

“These combined talents will mean greater one-stop financial resources for all Oklahoma communities that we serve,” First National Bank President and CEO Bryan Cain said in a statement. “We look forward to expanding FNB’s footprint westward and throughout the metro area.”

In the proposed deal, First National would be acquiring a larger bank whose net loans are 108.8 percent of deposits, according to the bank’s latest quarterly filings with the FDIC. At the end of the first quarter, The First State Bank had $365 million in net loans — including $76.3 million in commercial loans — compared to $335.4 million in total deposits. The First State Bank also reported nearly $1.3 million in net income through the first three months of the year.

Citizen Potawatomi Nation Tribal Chairman John “Rocky” Barrett said in a statement that the deal “demonstrates that we live in a land of opportunity,” citing the two banks’ heritage and commitment to customer service.

“One bank was born in a tiny farming community in western Oklahoma, and the other began in a doublewide trailer on a gravel parking lot,” Barrett said in a statement. “Both share a common trait accounting for their very uncommon success: dedication to providing the best customer service. Opportunity is the doorway to success for a bank and its customers, no matter how small the beginnings.”

The First National Bank-The First State Bank deal comes as M&A in the banking sector has been in “a deep freeze” during the COVID-19 pandemic and subsequent economic downturn, according to a 2021 dealmaking survey from trade publication Bank Director.

Just 8 percent of banks in the $250 million to $500 million asset range say they expect to be active acquirers over the next five years, while a majority, 72 percent, say they’re open to deals but plan to focus instead on organic growth. The remainder, 21 percent, say their bank is unlikely to pursue M&A as part of a growth strategy.

Across all asset sizes, more than one-third of survey respondents said their bank is likely to acquire another bank through the end of 2021, a “significant decline” from a year ago, according to Bank Director.

“The barriers to dealmaking may prove difficult to surmount in today’s uncertain economic and political environment,” Bank Director Vice President of Research Emily McCormick wrote in a  report on the survey results. “With pressures on small businesses and the commercial real estate market exacerbated by remote work and social distancing measures, the recovery of the U.S. economy — and bank M&A — may hinge on conquering the coronavirus.”