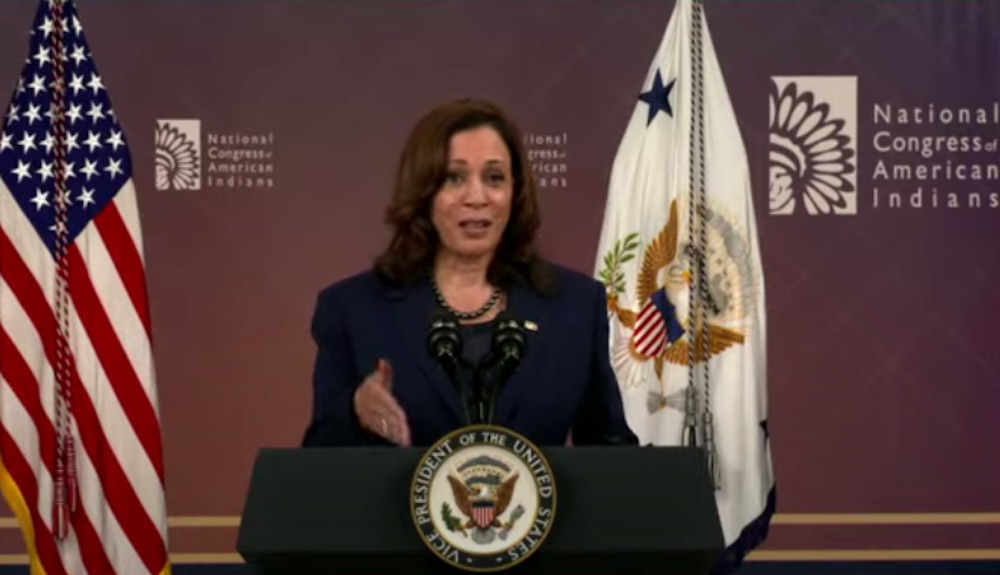 Before the vice president’s announcement, tribes had been arguing that several federal agencies had worked during the Trump administration to illegally subvert the 1992 employment and training law and a 2017 amendment to it.

The 477 program is widely viewed as a strong way for tribes to exercise their sovereignty over their spending of federal funding related to tribal jobs and related programs.

“I am very proud to announce right here today that our administration is reopening our memorandum of agreement on the 477 program,” Harris announced on Oct. 12 at the annual meeting of the National Congress of American Indians, held virtually this year because of the ongoing pandemic.

“And I don’t need to tell you: This program gives tribes the power to make decisions about how best to integrate and deliver federal services within your nations,” Harris told tribal leaders. “I know that this is an action that many of you have asked for, and I am optimistic that together we will be able to renegotiate this agreement to support tribal sovereignty.”

The law, which first passed Congress in 1992, allows tribes that choose to create and participate in what are known as federal 477 plans to streamline various funds and programs tribes operate through agreements with the Department of the Interior, as well as the Departments of Health and Human Services, Labor, and Education.

The law was primarily meant to support tribal programs that reduce Indian unemployment and increase the efficacy of employment and training programs through the reduction of budgeting, auditing and compliance reports from tribes to the federal government.

During the Trump administration, tribes were pleased to see an expansion of the 477 program courtesy of the passage of the bipartisan Indian Employment, Training, and Related Services Consolidation Act in 2017. That law broadened the program by making it permanent and by increasing the number of federal agencies required to participate in 477 plans. The new agencies included under the law were the Departments of Agriculture, Commerce, Energy, Homeland Security, Housing and Urban Development, Justice, Transportation, and Veterans Affairs.

Notably, Treasury Department programs for tribes were not included in the updated law. Had they been included, tribes could have been eligible to place at least some of their pandemic relief funds and related programs into 477 plans, resulting in reduced federal compliance issues regarding those monies that many now face. Indian affairs lawyers say that some tribes have been asking for legal advice on whether their Treasury-related COVID-19 jobs and recovery programs could be eligible for 477 plans now or in the future. The answer, lawyers say, appears to be “no.”

Approximately 270 tribes and tribal entities have participated in the 477 program and at least a dozen more tribal entities are actively working to get into it, according to tribal and federal statistics.

Tribes and tribal citizens use the program in a variety of ways, including to improve economic development in Indian Country. The Citizen Potawatomi Nation, as noted by the White House after Vice President Harris’ announcement, has used its 477 plan to create a revolving loan pool for small businesses that employ tribal citizens. The Bristol Bay Native Association has used its 477 plan to provide services to a tribal member on welfare assistance who wanted to be a child care provider, also according to the White House.

Under the program, participating tribes don’t need to fill out endless bureaucratic forms involving each funding stream and program they participate in with the included agencies. As a result, these tribes have been able to get more work accomplished, while spending less time and money on paperwork and related resources.

According to the National Congress of American Indians, the law has specifically “enhanced the quality and accessibility of workforce development services for Native people and made existing federal programs significantly more effective in supporting tribal nations and Native organizations as they work to meet their employment, training, education, and welfare reform needs.”

The Biden administration’s decision to open consultation comes after many tribal leaders raised concerns about a memorandum of agreement (MOA) signed by several federal agency heads in relation to the program during the Trump administration.

The MOA, signed by officials with the Department of the Interior and twelve other federal agencies in December 2018, limits the positive effects of the 477 program and includes unlawful provisions, according to tribal officials.

Soon after the MOA was signed — without any tribal consultation — tribal leaders and advocates realized that several portions of the memo appeared not to follow the law by creating agency roadblocks that both the initial law and the 2017 law were intended to prevent.

Hypothetically, under the law, a tribe with employment, training and related programs developed with federal funding received from the included agencies could consolidate all of that programming into one 477 plan. To fulfill federal compliance rules, that tribe could submit one simplified report to the Department of the Interior each year, thus reducing vast amounts of paperwork, time and financial resources for that tribe.

However, the MOA ended up illegally complicating that hypothetical scenario, according to tribal officials.

Among several claims, the tribes said the MOA illegally transferred decision-making authority of appropriate programs for tribes to include in 477 plans from the Secretary of the Interior to other agency heads. Further, tribes say that agencies beyond Interior are trying to limit programs that can be included in their plans, including programs funded through competitive funding and block grants.

“The unlawful MOA cuts back on the congressional scope of the 477 Law by declaring that the 477 initiative ‘does not include programs for which employment and training are not a clear and stated purpose in the program’s authorizing legislation,’” a coalition of tribal advocates called the PL 477 Work Group explained in a letter, sent in April to Interior officials. “This language is a pure invention of the MOA drafters and appears nowhere in the actual 477 law.”

Other illegal portions of the MOA, as stated in the letter signed by Margaret Zientek and Holly Morales, co-chairs of the PL 477 Work Group, include the allowance of untimely delays — beyond the required 90 days — in the federal review of programs to be included in tribal 477 plans and the ability of agencies to deny waiver requests on issues including reporting compliance.

“We have been asking the federal agencies to simply follow the law,” Zientek told Tribal Business News. “If they followed the law, they wouldn’t be having a problem from us.”

Added Zientek: “They used the MOA to define law; that’s not the purpose of an MOA. The purpose is (to address) how they’re going to do business with tribes. Instead, they used it to limit the intent of the law.”

Legislators who care about the program have tended to agree, and they have sent a bipartisan letter and communications to several federal agency officials — both under the Trump and Biden administrations — to attempt to get the problematic portions of the MOA addressed and changed.

With the Biden White House agreeing that the MOA should be reopened for tribal consultation, tribal officials are generally pleased, Zientek said. Tribes do not believe the White House would be making such a public announcement of the review process by the Vice President of the United States if it did not agree that changes to the MOA need to be made in tribes’ favor.

“They have listened,” Zientek said of Biden administration officials to date. “The fact that we have the White House backing us is huge.”

Zientek said she and other tribal officials expect positive changes within six months: “No more than that. They have held us back for too long already. If they come back and hinder us again, we’re going to scream long and hard.”

“It really fits with the model of how we want to operate in terms of tribal relations where we work in collaboration with tribes,” Newland said. “We want to make sure we are offering the greatest flexibility possible so that tribes can implement and operate programs at a community level in a way that makes sense for their communities, and not necessarily requiring them to elevate federal form over substance.”

At the annual meeting of the PL 477 Work Group in September, Newland had told attendees that he couldn’t commit to opening the MOA at that time, and some tribal advocates expressed frustration afterward. That the White House quickly moved to address the issue less than a month later was “good news,” Zientek said.

On whether the MOA is unlawful in any way, Newland said: “At the end of the day, what it’s about is making sure that all of the federal agencies are acting consistently when it comes to tribal 477 plans.”

“We’re going to make sure that tribes are a part of this process as we move along. We welcome the critiques and solutions that tribes bring to the table,” added Newland, the former president of the Bay Mills Indian Community. “It’s not something that’s going to languish, it’s something that will come together in short order. We’ll get this done.”