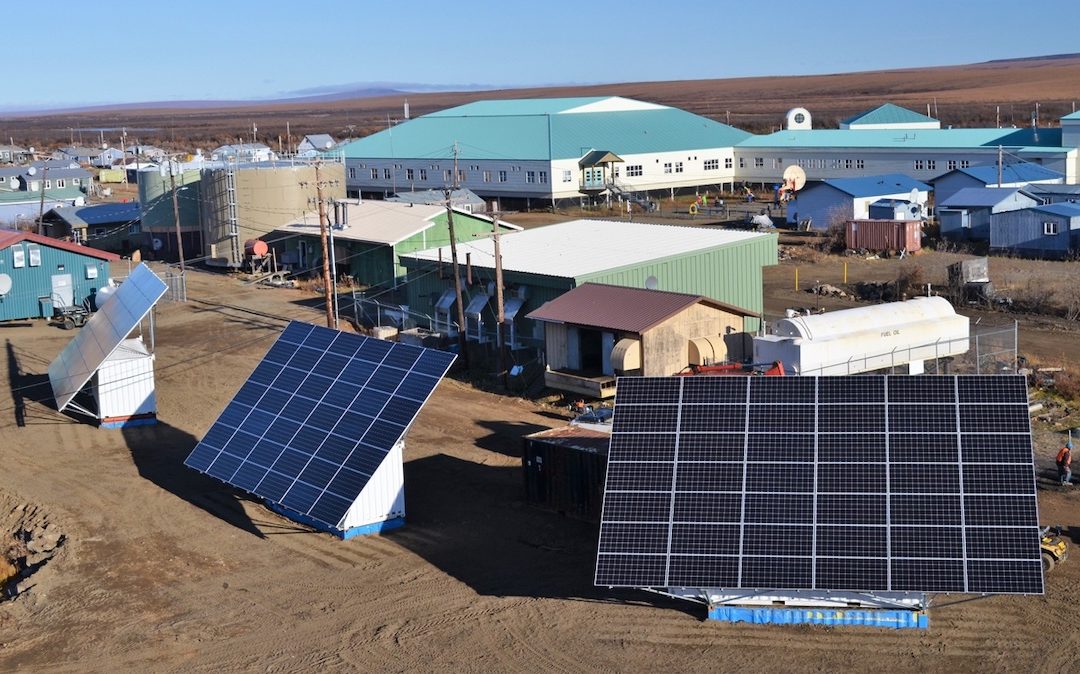 Two Iñupiat villages in northwestern Alaska will start work on a solar panel installation project next month that will help the region in its goal to rely 50 percent on renewable energy sources by 2050.

Earlier this year, the Northwest Arctic Borough — the government entity that oversees 12 villages in the region, including Shungnak and Kobuk — received a high energy cost grant from the U.S. Department of Agriculture, in addition to a local grant from the village improvement fund, to finance the $2.1 project.

“Those villages are some of our highest cost villages in the region,” Ingemar Mathiasson, the borough energy coordinator, told Tribal Business News.

Shungnak and Kobuk are home to a little more than 400 people, the vast majority of whom are Iñupiaq. The remote nature of many Alaskan villages means that fuel sources must be flown in or barged, with those costs passed on to the consumer.

On the upper Kobuk river, where Shunganak and Kobuk lie, low water conditions restrict barge access seasonally, meaning fuel typically needs to be flown in, according to Mathiasson.

“The project aims to maximize the amount of diesel fuel offset by aiming to try to turn off diesel generators with full solar production in May, June (and) July,” Mathiasson said.

In Alaska, where the sun doesn’t completely set during the summertime months, solar panels are a viable cost-savings measure for power generation.

The solar panel array will save about $75,000 in fuel costs per year between the two communities, which is equivalent to 15,000 gallons of fuel, according to Mathiasson.

Additionally, the project represents a step toward sustainability for the region.

The communities are joining together to form an independent power producer (IPP) that will sell power back to the utility, Mathiasson said. The IPP will mutually benefit both the communities and their local utility company, the nonprofit Alaska Village Electric Cooperative. The IPP’s energy sales will pay for the maintenance and eventual expansion of the array, and the utility company will benefit from buying the renewable energy back at a stable rate.

The utility company will pay the “avoided fuel cost rate” at the same cost or less than the actual cost of diesel, Mathiasson said.

The project will increase sustainability and resilience in the community, which will be less affected by a fluctuating fuel market with a decreased reliance on diesel.

“So both sides make out,” Mathiasson said. “The IPP gets more funding back to operate the array, and the utility (has) the savings by not having to buy diesel fuel. So it’s kind of a handshake operation to replace the diesel fuel with local, sustainable, renewable solar energy.”

The project represents a shift toward renewable energy throughout the region. With this project, Mathiasson said that all 12 communities in the borough will have some form of renewable energy, including wind turbines and solar panel arrays, some of which are installed on water plants.

Northwest Arctic Borough Mayor Lucy Nelson told Tribal Business News that the project is a step toward the borough’s vision to generate half of its energy from renewable sources by 2050.

“Steady progress has been made on reducing the cost of energy in the region by installing solar arrays on all water utilities to reduce use of diesel in the region and achieve diesel-off operation for periods of time,” she said. “The most important benefit is that solar energy reduces electricity bills, has low maintenance costs, (and) reduces reliance on diesel, which is a high cost and produces harmful emissions that affect the quality of air, water and soil.”

In 2020, Alaska Native Renewable Industries completed a project more than double the size in the borough’s hub city of Kotzebue. The city, which has offset its diesel cost with wind turbines for decades, is now about 50 percent powered by renewable energy.

With the exception of the Kotzebue solar operation, Mathiasson said the Shuganak and Kobuk solar project will pave the way to making a drastic effect, as opposed to just offsetting the cost of fuel.

“The smaller ones were just made to offset the cost of the water plants and really didn’t do anything more than that,” he said. “But these will definitely make an impact in the cost of electricity and lower the cost of operations, and actually would produce cleaner energy, which is what we all want in this world.”

The partners will begin construction on the project next month, which is expected to last through next summer. The construction crews will include laborers, carpenters and a cook, and the company will prioritize local hires, according to a statement.